Middler class: God stays in good times and in bad

Sunday was a pretty serious day in the Middler classroom. Not only were we focusing on a very sad story but we had an unusually large number of people we needed to pray for this week. It was a gift to be able to lift up our classmates’ mother recovering from surgery, Dennis Lin from Sunday Fellowship, people still recovering from Hurricane Matthew as well as the Grigorieff family following the sudden death of Norah’s son, Jacob. As we placed out written prayers into a bowl in the middle of our table, we talked about how we were symbolically placing all of these people in God’s loving care. Even if we couldn’t fix any of the situations, I think we all felt lighter for having invited God to be with them and to help us carry our concerns.

I wrote last week that the Middlers have spent the fall learning about the ups and downs of ancient Israel as well as the good and bad choices made by its leaders along the way. This Sunday we told the story of one of Israel’s lowest points, the Fall of Jerusalem and the beginning of the Babylonian Captivity. We heard how Zedekiah, Judah’s last king, tried to flee the city, abandoning his people before the arrival of the huge Babylonian army. After two years of starvation and siege, the Babylonians finally broke down the city wall, burned all the homes, looted the Temple built by King Solomon and marched thousands of Jerusalem’s most skilled residents all the way to Babylon.

We took a break from heavy stuff for a few minutes to do some more work on our wood round project for the church auction. It felt really good to use our hands paint wood conditioner on the wood to bring out its beautiful grain patterns.

Afterwards, we came back together for discussion about places in the world where people are currently being forced to leave their homes and become refugees. Countries like Syria and Iraq were named. To get a better idea of how difficult it is to be a refugee, we walked slowly around the room while listening to One Green Apple, a story written from the perspective of a young Muslim girl newly arrived in the United States.  After the story, we took a few moments to pray while listening to some calming music. I hope we could feel that while leaders may disappoint us in difficult times, God stays in good times and in bad. Special thanks to parent helper Kathleen Reidy. 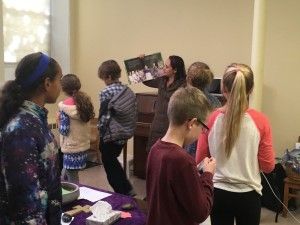 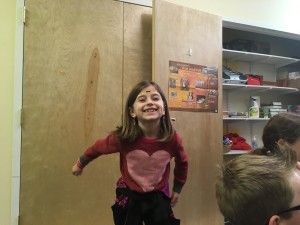 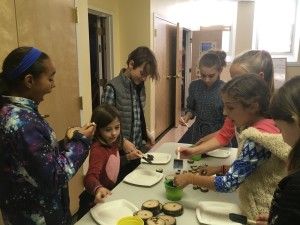 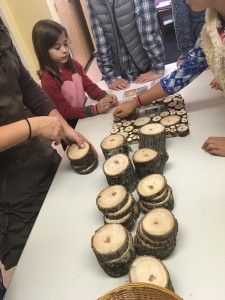