On December 3rd, Jessica offered this sermon for all ages: 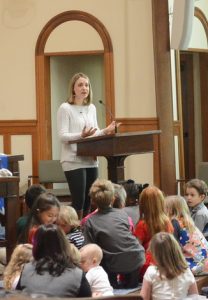 This year Advent has the fewest days possible: only 21.  In fact, the fourth Sunday of Advent this year lands right on Christmas Eve.  I feel like you blink and take a few deep breaths and Christmas is here.  Seems to happen every year, but this year Advent really is quite rare in its brevity (contrast this with last year which had the longest Advent possible).  So we only have 21 days now to wait for Christmas, right?  Waiting is often the word that is used when referring to the season of Advent, especially in children’s literature and when explaining this season to young ones.  But waiting can be boring.  Waiting can make you feel anxious or nervous or frustrated (think about waiting on hold with your cable company or waiting for an important test result).  Waiting is really not something anyone wants to do.  So this isn’t really the right word to describe the mood and tone of this holy season.  Instead, I would use the word preparation.  And anticipation.  And wonder.

Instead of sitting twiddling our thumbs for three weeks, we prepare.  We bake cookies, we pick out a tree, we put up lights or add a festive touch to our dining rooms, we buy gifts, we go to parties.  Maybe some of us make a concerted effort to slow down this season and embrace the quiet, slumbering world outside while some of us will be organizing and planning and arranging every day until Christmas.  We may do it differently, but we all prepare in some way during Advent because we are anticipating that great gift of wonder and joy and love on Christmas day.

We just witnessed, through masterful dramatic retelling, the moment that Mary learns she is to be the mother of Jesus.  This young teenager is perhaps at home.  By herself – this is important – maybe cleaning or making bread or getting ready to collect water.  And the angel Gabriel suddenly appears to her.  After the angel calms her surprise and fear, he gives Mary this HUGE news that she will become pregnant by the power of the Holy Spirit and give birth to God’s own son.  I don’t have to remind you that in the first century in Israel, getting pregnant before marriage was a big no no.  Mary knew this, but instead of questioning or disbelieving or simply refusing Gabriel’s proclamation, she said, “Yes.  I am ready to serve.  Let it be just as you have said.”

Now, in Sunday school every week we are experts at Wonder Questions.  We wonder a lot and we ask lots of questions that often result in pretty dynamic discussions.  So this is automatically how I approach our bible stories.  I wonder.  I find it very significant that Gabriel appeared to Mary herself to deliver this good news.  In just the previous verses before this passage, Luke describes another encounter with the angel Gabriel and Zachariah, the husband of Elizabeth, who is Mary’s cousin and becomes miraculously pregnant in her advanced age.  Gabriel told Zachariah this wonderful news – he didn’t appear to Elizabeth at all.  So why come to Mary?  I wonder why Gabriel didn’t appear to Joseph instead.  Or at least Joseph and Mary together.  That certainly would have cleared up any questions of dishonesty or infidelity.  And although the book of Matthew does describe a dream in which Joseph is visited by an angel of the Lord and reassured of Mary’s immaculate conception, this happens well after Mary herself is told the news.

So Mary is told first.  And Mary is alone when she receives this news.  Why?  I think it comes back to preparation, anticipation, and wonder.  For a little while, Mary is the only person in the world who knows she is to become the mother of God’s son.  Just Mary.  God has given her an exceptional gift to prepare herself and revel in her anticipation and wonder in her own personal way.  God allowed Mary to process this huge news however she needed to in order to embrace it.  The unique and personal ability to prepare was God’s gift to Mary, and it is God’s gift to us as well during Advent.

I’d like to read a very short children’s book now, called Who Is Coming to our House? by Joseph Slate.  It has simple words and very simple pictures of animals in a barn preparing for someone. 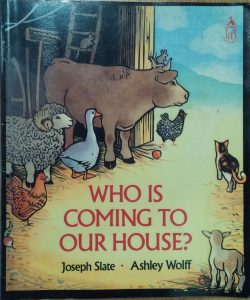 “Spin new webs,” says Spider.  “I will line the crib with eider.” 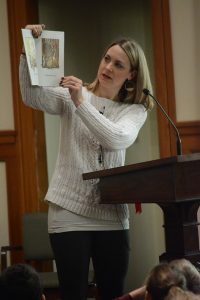 “Someone’s coming from afar.”  “I will nose the door ajar.”

“Who is coming to our house?”

“Welcome, welcome to our house!”

This season of preparation and anticipation is such a gift to us.  Just like these barn animals, we get ready in all different ways to celebrate Christmas.  All are unique and special and personal.  We thank God for this time to prepare and anticipate the wonder of the birth of Christ, just as Mary was able to do.  How will you prepare this Advent season?

God of Life.  We lift up the Advent story of preparation, anticipation, and wonder.  Of a young mother embracing her astonishing news and a king appearing when we’d least expect it. Open our eyes and our hearts that this might be an Advent of hope to the world.  Amen.