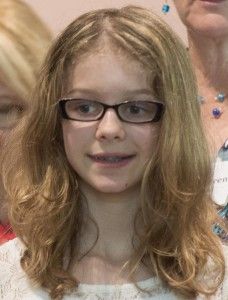 I’m fairly new to this church, but so far it’s been how I think religion should be: welcoming to everyone. I grew up in another Christian tradition, and early this year I began feeling uncomfortable with the homophobia I saw during a church event. No matter what they told me, I couldn’t shake the idea that this went against God’s intention of being loving and accepting of all people. So I began searching, and with a little time, I found a place that was close by and Open and Affirming: WCUC.

So when I got the chance, I went to experience worship hour. It was what I’d hoped for: a good atmosphere, nice people, and a safe place. It was loving and respectful, not harsh and judgmental. I have always liked singing: it’s one of my favorite ways to worship God, and I loved that aspect. I eventually began feeling differently about Sunday mornings: I could treat them as a positive thing, and look forward to it rather than feeling dread. This year, I’ve been closer to God than I’ve ever been, and as I’ll talk about soon, I see Him almost everywhere.

I soon had the opportunity to join youth group, and it’s one I’m glad I took. We read passages from the Bible, often following a theme, and they get me really thinking about God and the world and what I can do to make it better. We recently did the Crop Walk, and since that and the talks we’ve done about hunger, I’ve been trying not to take everything I have for granted because otherwise I won’t recognize when people need help.

And as for where I see God: I see Him in so many places. I’m a photographer, and I see Him in everything that I try to capture, especially the things like dead plants that tend to get overlooked, but are just as beautiful as everything else when in the right light. And I see Him in the kids I babysit, who are so genuinely accepting and kind to everyone they meet. I see him in good people, and in places like this where His mission is carried out. I see him in the little things, in the places I sometimes have to look twice at to truly notice.