West Concord Union Church has been a part of Edna’s life since childhood. She has enjoyed all aspects of providing fellowship at the church, including preparing church suppers and helping with funeral arrangements. She is good friends with a group of women her age from the church w 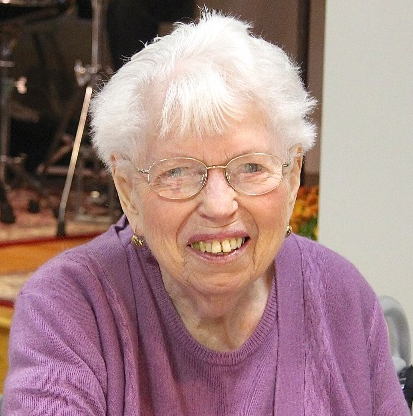 ho get together often. She enjoys the music at WCUC as well as Hannah’s sermons and says that the addition of the elevator has been “wonderful” since it allows her access to the church’s many events.

Edna’s family has lived in West Concord for about 100 years. First her aunt and uncle moved here to work at the Boston Harness Shop, which was owned by Harvey Wheeler. He built many of the houses on Cottage Street so that his workers could walk to work from home, which is what Edna’s aunt and uncle did. She spent summers here with them when she was a girl and liked the area so much that when she retired in 1986, she “moved up here the next day.”

Edna grew up in the Bronx, NY where she married and raised her daughter. She worked at Albert Einstein Medical College in New York for 25 years. She was an avid traveler when younger, and that sense of adventure has continued. She went up in a hot-air balloon to celebrate her 80th birthday!