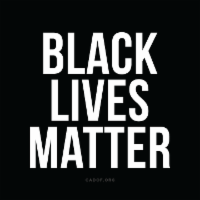 Black lives matter.  For me, this phrase indicates that there is a history of racism in our nation which results in violence against black men.  There is a systemic connection from historical violence (against slaves centuries ago, as well as the lynching of African-Americans after abolition of slavery) to contemporary violence, the death of black men at the hands of law enforcement.

Philando Castile did everything right on July 6 when stopped by police for a broken taillight.  He informed the officer that he was carrying a weapon, he and his girlfriend spoke in calm low tones, he slowly reached for his driver’s license.  Still, he was shot and killed as his girlfriend and her little daughter watched.

Many white people cannot see the systemic racism and its effects on people of color.  They claim the media is creating this problem.  They turn their focus to the tragic shooting of police in Dallas who were protecting Black Lives Matter protestors.  They insist white people also suffer violence.

Jesus Christ demonstrated remarkable vision and compassion.  He not only saw the bent-over woman, he understood the systemic oppression of the religious institution of his day. (Luke 13:10-17) Jesus saw the goodness in Samaritans who were despised by his friends and colleagues.  (Luke 10:30-37) Jesus engaged in conversation and socialized with prostitutes and tax collectors who would have been invisible to his fellow teachers and clergy (Luke 15:1-2).

I am a white person.  I want white people to stop killing black people.  I want police to stop engaging in systemic racist violence against men of color.  I don’t know what to do to make this world change.  So I pray.  I thank God for calling me to serve you, a church with a Black Lives Matter sign prominently displayed out front.  I talk to white folks about ending racism.  I read The New Jim Crow by Michelle Alexander.  I listen to people of color to hear their experiences of institutional racism.

My heart breaks with pain at the death of Philando Castile.  But a broken heart is the place where Christ heals and transforms with mercy and justice.  May it be so with my heart and yours.