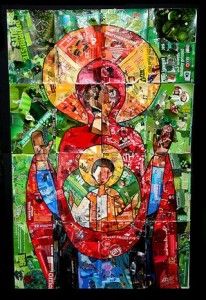 Who is this Mary we meet on the pages of Luke’s Gospel?

We like to imagine Mary as docile and domestic, but that is not what we hear in this text. After this unwed teenager says a humble “yes” to God and travels to meet her cousin Elizabeth, she breaks forth in a powerful song that speaks of scattering the proud, bringing the powerful down from their thrones, and lifting up the lowly; filling the hungry with good things, and sending the rich empty away. Apparently Mary is not a “nice girl” : someone who averts her eyes and keeps her mouth shut; a sweet vision in blue silk.

Mary is not a nice girl, but rather, a young woman who claims her place as the descendant of prophetic giants. She stands on the shoulders of Prophets like Isaiah, who proclaimed that God would cause righteousness to spring up before all the nations. She stands on the shoulders of her ancestor Hannah, who told us that there is no Rock like our God, who raises the poor from the dust. Mary stands in a long tradition of Jewish prophets and witnesses, who opened up their mouths to shout, to sing, about God’s promises of justice.

The Mary we meet today is a woman of power, who says things that may well offend us; we, who are rich, all of us, at least by global standards. Although we might not like them, Mary’s words been recorded in our bible, and set to music more times than anyone could possibly count. Her words have been treasured as one of the central messages of Advent and Christmas. So what does an encounter with Mary have to offer us this season?

I know many of us have been troubled in the past few weeks by news of unarmed black men and children being killed by armed white policemen; of a justice system that too often does not deliver justice; of horrific torture being carried out by our own government. We have been offered all too much proof in recent days that our nation is sick with racism; that we do not safeguard the life and liberty of all people; that we are lacking in compassion and love.

It seems fitting then, to listen today to Mary. Mary knew all too well what it was like to live in such a place. She was part of an oppressed minority group, a Jew in the Roman Empire. As a colonized people, her community was impoverished, disempowered, and always at risk. There was a carefully brokered peace between the Roman government and Jewish leaders, but any misstep could get you into trouble. Being in the wrong place at the wrong time, or drawing attention to oneself, was enough to get you killed; as Mary’s son would be, several decades later.

But in this moment, in this piece of the story, Mary is filled with hope. Despite all that is against her, she feels her capacity to magnify a God of strength and mercy, a God who levels unjust power structures and lifts up the lowly; a God who fills the hungry with good things, and sends the rich empty away.

As I listen to Mary, I wonder what my role is; what our role is, today. Could we also find a way to magnify our God in a society of inequality and injustice? I hesitate about this, because if I cast myself back into Mary’s story, I am a member of the ruling elite. By nationality, and skin color, by education and wealth, through no choice or fault of my own, I am part of that landscape that needs to be leveled. And I have benefited from my position of privilege every day of my life. Am I a fit instrument to magnify God at such a time as this?

The answer cannot be to do nothing, however complex these situations are. There must be a way for us to hold our government, our society, ourselves accountable. But how?

Among the many responses to these events that I have seen, there are some that seem to me to be standing in that prophetic tradition that Mary did; honoring the same values that our God does. There are those who have simply been mourning: lifting up the tragedy of what has occurred, gathering in churches and on the street, lighting candles, and claiming the humanity of all those who have suffered and died. There are those who have called us to confession and repentance, for our own participation in and perpetuation of the problems of racism, privilege, and hatred of neighbors and enemies. There are those who have shared a witness about what it is like to be black in America, to have their rights so often ignored and their personhood so often denied by the government that is supposed to protect them.  And there are those whose protest is also a form of praise, as Mary’s was: Black leaders who express both holy anger and hope for the future; White policemen in uniform, holding signs that say “black lives matter”; Clergy of New York City of many backgrounds, who have spoken fearlessly to their civic leaders and filled City Hall with their bodies; so many people who gathered in protests yesterday to stand up, to show up, to say: this matters.

Mary reminds us, today, that God has promised something different than what we see happening in our nation today. And I do believe we have a role in helping to bring it about, even and perhaps especially those of us who have more than we need: more money, more power, more privilege.

We, too, can mourn, opening our hearts to the tragedies that are occurring around us, recognizing the full humanity and vulnerability of those who have been tortured and killed.  We, too, can confess that we have been complacent in a system that may serve us well, but does not serve everyone well. We can listen: not just to people who look like us, and media outlets that cater to us, but to perspectives that are new, perhaps even strange or startling to us.  We can strive for a form of protest which is also praise; amplifying, magnifying voices that speak as Mary’s does, from deep knowledge of oppression, and a compelling belief in God and human worth.

For today, perhaps it is enough to let Mary’s words work in us – these powerful ancient words, from a woman of so little power or privilege, a woman whom everyone expected to keep silent. Her brave words are still echoing today, being sung and shouted around the world, ready to change our hearts, and guide our actions. Thanks be to God.

Image from House of All Sinners and Saints, a collage of holiday advertisements transformed into an image of Mary.

For a powerful encounter with the Magnificat, consider watching this video by the Salt Project.