A Coalition of Love 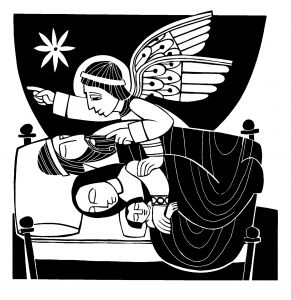 The twelve days of Christmas ended on Friday with the feast of the Epiphany, when we remember the arrival of the Magi at the manger. But in the Gospel of Matthew, the Christmas story doesn’t end there, at that peaceful gathering around the Christ child.  It goes on.

The Magi are warned in a dream not to return to Herod, and travel home by another way.  Their failure to inform him of the baby’s location makes Herod so angry that he decides to kill all the children in and around Bethlehem who are two years old or younger. This strange and horrific act is called the massacre of the innocents, and recalls the violence of another biblical tyrant, the Egyptian Pharaoh.

Miraculously, however, Jesus is not killed. An Angel of the Lord visits Joseph in his sleep, telling him to flee to Egypt with his family.  It is years and two more angelic visits later before Jesus finds a home in Nazareth, before he finds a safe place to grow into the man who we will meet at the shores of the Jordan River.

Why does this beautiful story end with so much drama and tragedy?  The gospel of Matthew reminds us that Christmas is not a fairy tale. Jesus was a real child, born into a real and dangerous time and place.  Jesus was a Jewish baby born into a Judea ruled by King Herod.

Herod the Great was an enterprising man from a powerful family. His father appoints him to be the governor of Jerusalem, but this isn’t enough to satisfy Herod’s ambitions.  Eventually, Herod travels to Rome. While he is there, he somehow convinces the colonial power to recognize him as “King of the Jews.”  The only problem is that there is already a King in Judea: the descendant of a long line of Hasmonian Kings who had ruled independently before Roman conquest. Following the Roman proclamation of Herod’s new rank, a war begins between the old King and the new. Herod prevails, and a new dynasty begins.

Once in power, Herod is a brutal despot. He outlaws protests, gathers information through a secret police force, jails opponents, and imposes a painful tax.  His private behavior is also remarkable for its cruelty. He banishes his first wife and child when a second marriage becomes more politically expedient.  He executes several family members, including another wife.  Herod publicly identifies himself as a Jew, but the Jewish council, the Sanhedrin, condemns him. His rule provokes anger amongst the Jewish people and helps to plant the seeds for later revolts against the Roman Empire.

Jesus was a real child, born in a real and dangerous time and place.  Jesus was a Jewish baby born into a Judea ruled by King Herod.  How could this vulnerable, squirming bundle of hope possibly survive? How could the one who in his infancy was called the “King of the Jews” be protected from a vicious reigning King?

According to Matthew, Jesus survives because of a coalition of love. First, there are the magi.   These mysterious world-trotting astrologers listen to the guidance of their dreams, and their dreams tell them to engage in civil disobedience.  Instead of returning to Herod, and providing intel about the child’s location, they go home by another way – never to be found again.

Enraged by the failure of his plan, Herod turns to mass violence.  Then angels emerge as the next part of the coalition.  They become the underground resistance, getting word to Joseph that he must flee with his wife and baby. Then Joseph steps up, as provider and personal bodyguard, relocating his family again and again, until they are secure.

How safe is our hope today? What are the leaders like in this time and place?  We are anticipating a new leader for our people: our president-elect. We are watching as the confirmation hearings come up for his appointees, watching as a newly elected Congress begins to act. It is not the job of a pastor or a church to take a partisan stand. We need to protect the separation of church and state, for the strength and independence of both.  Our responsibility as Christians is not to endorse or villify anyone, but rather to unswervingly advocate for justice and compassion in our common life.

I can’t say I’m encouraged by what I’ve seen and heard recently from of the leadership that is taking power in this season. There has been an effort to reduce the accountability of our elected officials.  There has been an attempt to repeal a healthcare law without any plan for how to replace it for those who rely on it.  In speeches and in appointments and in policy proposals, there has been a casual disgust and even a brutal disregard for neighbor: black neighbors, female neighbors, poor neighbors, immigrant neighbors, Muslim neighbors.  We can disagree passionately about how to best govern this nation without resorting to dishonesty, corruption, quick fixes that fail our most vulnerable, or the dehumanization of our fellow Americans: fellow children of God.

What will it take, to uphold the best of our values when our national leaders are faltering?  How can we continue to move towards a more perfect union and uphold a better vision for our common life?  How can we survive or even thrive in our daily lives, witnessing the ethical failings of our leaders and fearing the threat they may pose for us and those we love?

The story of Christmas teaches us that hope can be born in all circumstances.  There is no such thing as a lost cause for God. Even in the most unlikely situations, God still arrives with hope. That hope is not based on a large bank account. It cannot be protected by military might.  God’s hope spreads through the infectiousness of its beauty. It is sustained and protected by coalitions of love. God’s hope is deeply vulnerable and yet full of a startling and magnificent power.

What is your part, in the coalition of love that we need in this time and place?  How will you nurture and protect the hope that God gives us? How will we do it together?

God, show me how I can be part of your coalition of love. Help me to trust in the hope that you have given us. Grant me wisdom, to perceive the truth when the air is full of lies. Grant me compassion, to concern my heart with the welfare of the most vulnerable even if I am protected by privilege. Grant me courage to walk in your ways, no matter what others choose to do. Help me find that work that is mine to do each day. May I love you with all my heart, and soul, and strength, and every neighbor as myself, that your kingdom may come on earth, as it is in heaven. Amen.