Bread from Heaven, Water from the Rock 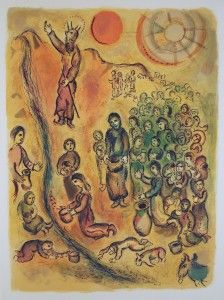 When we meet the Israelites in these passages, they are complaining. A lot. They are convinced that they are suffering a fate worse than death, and it’s not hard to understand why. Just consider what they’ve been through.

Long ago, their ancestors were forced to immigrate to Egypt to escape famine. As a result, they have been slaves there, working without pay to build up an empire. They asked God for help, but it took a long time to get any. Now that God is doing something, She seems to have some pretty strange ideas about how to bring about their liberation.

This whole freedom project started when God chose a leader – but what a choice! Moses? Moses was raised by Egyptians, so he’s hardly trustworthy, and he’s a terrible public speaker. That was just the beginning. To convince the Pharaoh to let them go, God visited plagues on the whole land: the water turned to blood, frogs dropped from the sky, there were gnats and flies and livestock extinctions, boils and hail, locusts and darkness all over the land. It was an impressive show of force, but not really that pleasant to live through. Finally, Moses told them they could leave – giving them hardly any warning – and led them on a terrifying journey across the red sea, with an Egyptian army threatening from behind, and walls of water towering on either side.

None of this has been easy. And now these people are on what seems to be an aimless journey through a desert without a reliable source of water or food. When food finally arrives, it is manna: which was far as scholars can tell was the hardened secretions of plant lice. Not everyone’s idea of delicious.

The Israelites complain against Moses and Aaron and against their God. They moan, and they murmur. But who can blame them? They’ve been through a lot, and they’re still struggling to survive.

But there’s more than one side to each story. What do you think God’s best friend might have to say about the situation? In my mind, it would go like this: Without you, holy one, these people would have starved long ago in their homeland. But you’ve been on their side all along, solving problems right and left. Moses was an amazing pick: a man of faith who knew both Egyptian and Israelite culture. You found Aaron, Moses’ brother, to be his speechmaker since he wasn’t up to that part the job. The plagues on the Egyptians showed real creativity. And that exit path across the red sea was a stroke of brilliance — not to mention, a great story to tell the grandkids.

You did all this; and still they wanted more. So you went ahead of the people as a pillar of cloud, and a pillar of fire, showing them where to go next. You led them to water, not once, but many times. You found a way to get them both bread and meat in the middle of a desert! Not only that, but you devised a miraculous distribution system for the food, so that none could be hoarded or wasted; everyone got what they needed. What more do these people want, O Lord? They do not deserve you.

According to God’s best friend, the Israelites should be a little more grateful. Life hasn’t been perfect for them; but it would have been a lot worse without God on their side.

All of us know people who complain no matter what happens to them in life. They could be rich, beautiful, and on vacation in Hawaii with the love of their lives, and they would still find things to complain about. And we may know some folks on the other side of the spectrum, too: people who are persistently cheerful, or even more impressively, persistently grateful and brave, even in the face of incredible challenges.

But most of us fall somewhere in the middle. We have experienced some form of hardship; and yet we have also experienced love and help and hope. And in response to this mix of bad and good, hard and beautiful, we swing between complaint and gratitude, frustration and contentment.

But what does God have to say about all this? What would be God’s side of the story, for the Israelites, and for us?

According to some Christians, the answer is simple. “God never gives us more than we can handle.” “When God closes a door, he always opens a window.” In other words, these folks are on the side of God’s best friend. Buck up, they say: you’ve gotten a lot more than you deserve already. Put on a happy face.

But these kinds of responses drive me wild. They ignore the reality of suffering, and I don’t believe God does that. Just look at the texts we read today. The Israelites may have a bad attitude, but they also have a real need. They were in slavery, and now they are literally out in a desert without food and water. Moses and Aaron resist their complaints, and their blame, but God doesn’t. God says: I have heard your complaint, and I will give you what you need: freedom, bread, and water.

Humans are vulnerable. We have spiritual needs, for hope and companionship. We have physical needs, for daily bread, and drinkable water. And you don’t have to look very far to see someone who’s barely getting by in one category or another.

The scriptures teach us that God does not, maybe even cannot prevent pain and suffering. But God is present nonetheless. God listens, with understanding and compassion. God provides; maybe not when we want, maybe not quite how we want. But God provides real help for us when we have need.

So the next time we find ourselves veering too far into the territory of self-pity and complaint, let’s ask ourselves: what is the other side of the story? It needn’t be a simplistic story that erases all the hardship, just one that tells how God has been with us all along. A story that points to all the strange and creative ways God has been responding to our needs.

When we tell the story of our lives this way: with honesty about our problems, as well as gratitude for God’s presence and help, we live differently. And we’re more likely, too, to claim a role as part of God’s amazing distribution system: sharing hope and companionship, water and bread, wherever it’s needed. Thanks be to God.