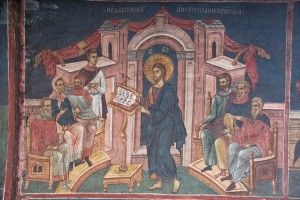 When Jesus enters the Jerusalem temple in the passage we hear today, he is already in trouble. Two days ago, he processed into the city on a donkey, as adoring crowds waving palms proclaimed him the Son of King David. Yesterday, he overturned the tables of the money changers in the temple, and drove out all who were selling and buying, claiming that the house of prayer had become a den of robbers. In just two days, he has claimed enormous public attention and challenged both political and religious leaders. So it’s hardly surprising that the chief priests and elders of the people stop him when he tries to make a repeat appearance at the temple.

“By what authority are you doing these things, and who gave you this authority?” they ask. In other words: who are you, and what gave you the right to make such a mess? The chief priests and elders must have been sure they were in the right. And they must have been sure they had the upper hand. They belonged in the temple, by right of ancestry, education, class, and tradition. They were the ones in charge. They were the ones who had brokered peace with the Romans. Who was this interloper, hogging the spotlight and disrupting the status quo?

Unfortunately for them, Jesus is not someone who’s easy to intimidate. In fact, he has an amazing talent for making even the most powerful people around him feel uncomfortably unsure of themselves. In just a few sentences, he stumps them with a theological question and goes on to tell a parable in which he compares them – the chief priests and elders of the people – unfavorably to tax collectors and prostitutes, the least respected people in Jerusalem. Wait a minute, Jesus says: are you certain that you’re the ones obeying God’s authority?

Both scripture passages today concern power and position, humility and obedience. In my experience, Americans in general and perhaps New Englanders in particular aren’t particularly fond of authority that’s not our own. We don’t like our government infringing on our private lives. We don’t like other nations having influence over us. We don’t want anyone bossing us around – whether they’re local leaders, or religious figures, our parents, our friends, or our children.

We don’t like being told what to do. But the passages for today make it clear that although we may be right to be suspicious of human authority, God’s authority is something we need to pay attention to. And God’s authority may not come through the channels we would expect; for instance, folks in special robes with titles attached to their names. Those who truly obey and exhibit the authority of God are often people who don’t make a big fuss about it. They may even be people who don’t have our attention or our respect: children, prostitutes, those experiencing poverty.

The authority of God is what matters, Jesus says; and it’s not what’s being expressed by the people and power structures that are in place. It was true then, and it is true now; it doesn’t take much effort to see it. But what should we do about it – we who are powerful, and we who have little power?

It might seem that since we hate so much to be bossed around, that we would be good at acting out: acting against the powers that be that stand in the way of God’s will, of God’s way. But at least for me, it’s not true. It pains me to confess to you that I harbor a deep desire to please people. Perhaps it’s because I’m from the Midwest, or because I’m a woman; I don’t know. But underneath any well-reasoned ideas or theological convictions I have, is a deep and strong compulsion to be liked, to be accepted. I feel it at work whenever I consider whether I want to do something that I imagine people may think is strange or upsetting or wrong: when I pierced my nose (you’ll notice it’s not pierced anymore); when I kept my maiden name during marriage; when I preach about racism, or money, or poverty. As much as I dislike being told what to do, I am still scared of doing anything differently than everybody else is. Which means I spend most of my life bowing to the authority of the majority, rather than honoring the authority of God. Sound familiar?

So I have to thank God that we still have prophets among us: people who remind us of God’s priorities, and make us uncomfortable with our compromises, and kindle in us a desire to heed God’s authority. There are plenty to point to just in the past few weeks: newscasters who speak out on the issue of domestic violence in the NFL and our culture as a whole; humanitarians and health officials who urge us to do more to combat the deadly spread of Ebola; and, just last Sunday, the 400,000 people who gathered to march in New York city – in solidarity with people at over 2,000 other rallies in 162 countries around the globe – all urging the UN Climate Summit to take real action to address climate change.

Prophets get so inspired by God’s vision for the world, that they stop allowing fear to control them. Like Jesus speaking to the priests and elders of the temple, prophets make the rest of us less sure that we’re following the right rules, or doing the right things. It’s hard to be grateful for that, especially right when it’s happening to us. But discomfort can be holy when it wakes us up to God’s desire for the safety and liberation of all people, and the healing of God’s creation. Discomfort can be a gift: an opportunity for us to open our minds and change our practices.

Holy God, sometimes we wish you would leave us alone. It is enough, sometimes it is too much, just getting through our daily lives; and yet you ask something more of us. You overturn our carefully set-up tables; you make a mess of our self-serving arguments; you point us towards the witness of people we don’t’ want to listen to. Grant us the humility of an open mind; grant us the courage of a compassionate heart; allow us, each in our own way, to be prophets for you: speaking your unpopular and uncomfortable truths, walking your unfamiliar and sometimes arduous paths. Remind us, that this strange and difficult work is a gift from you: leading us to liberation from all lesser authorities, leading us closer in love to you and our neighbors. Amen.