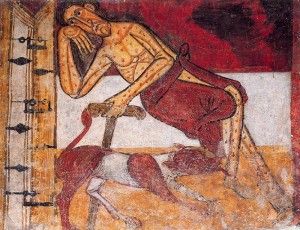 There is a rich man who dresses in the finest purple and linen, and eats sumptuously every day: figs and dates, meat and oil, bread and wine. At the gate of his house lies a poor man named Lazarus. Lazarus is so hungry that he dreams of eating crumbs from the rich man’s table.  He is so sick that he cannot prevent dogs from licking his sores. The fate of these two men could not be more different.

In time, both of the men die. Once again, their fates are very different. Lazarus is carried away by angels to lie in comfort and peace in the bosom of Abraham. The rich man is tormented in Hades.

The rich man looks up from Hades and sees Lazarus with Abraham. He calls to Abraham to send Lazarus to cool his tongue with water.  Abraham explains that he has already received his good things.  Now a great chasm has been fixed between the two of them.  The rich man calls out to Abraham again, asking Abraham to send Lazarus to his family, to warn them to change their ways.  But Abraham replies: “They have Moses and the prophets; they should listen to them.”

What does this parable have to say to us?

In some periods of Christian history, folks have focused in on questions concerning what comes after death.  Where exactly is the bosom of Abraham located? Is Hades a kind of purgatory?  Where do we go between the time of our death and the arrival of the Day of Judgment?

We can also read this parable with questions about divine justice. If we suffer in life, will we, like Lazarus, receive a heavenly reward? If we are sinful, will we be punished? And are the sins of the rich man in this story, ignorance and selfishness, are these sins really bad enough to warrant an eternity of fiery torture? Is this what our God of love intends?

I wonder what Jesus is trying to teach us with this story. Personally, I doubt that he was offering a theological treatise on life after death or justice beyond the grave.  When he teaches, Jesus is mostly concerned with helping his listeners discover the kingdom of God within and around them. How could this story of extremes point us towards the kingdom?

It is a heartbreaking time in our nation. I’ll lift up just a few events from the past two weeks. On September 14th in Cleveland, Ohio, 13 year old Tyre King was killed because he was wanted for questioning and was holding a BB gun.  On September 16th, in Tulsa, Oklahoma, 40 year old Terence Crutcher was killed after his car broke down; he was unarmed, and holding his hands in the air.  On, September 20th, in Charlotte, North Carolina, 43 year old Keith Lamont Scott was fatally shot 4 times in the chest while sitting in his car; eyewitnesses are still debating whether or not he was armed.

In the past year or two, many white people in our country have slowly become aware of a phenomenon that is, tragically, not at all new. According to the Washington Post, black Americans are 2.5 times as likely as white Americans to be shot and killed by police officers.  Of unarmed people shot and killed by police in 2015, 40% were black men, even though this group represents only 6% of the population. How shall we explain this?

Let me be very clear. I do not think the police officers in this country are awful people. On the contrary, I think they are public servants who make great sacrifices to do difficult and important jobs.  I cannot imagine making the decisions they have to make as they try to keep themselves and the public safe in very complex situations. I am grateful for their service, and I hope that we work to make their jobs both easier and safer.

The disproportionate danger of police stand-offs for black people is not happening because police officers are awful people. It is happening, at least in part, because our society has racism as part of its founding identity.  This racism is visible not only in the institution of slavery and our history of segregation but also in property and voting rights, in mortgage and housing access, and in patterns of school disciplinary action and incarceration. It is embedded in everything from children’s books to Hollywood movies to employment practices. Racism does not just consist of individuals saying hateful things. Racism exists in all of us; and it naturally emerges whenever we feel under threat. As UCC Pastor Traci Blackmon says, “It is impossible to be unarmed when my blackness is the weapon you fear.”

Imagine that white society in America is like the rich man, dressed in purple and fine linen and feasting sumptuously every day. Across income lines, we are benefiting from a feast of white privilege that is invisible and unremarkable to us.  Right at our doorstep, just outside the gate, there are others who are suffering from a lack of what we have in abundance: people who are hungry for justice, literally sick from oppression, even dying as a result of racism.

As white society begins to wake up to the reality we’re living in and its consequences, we often follow the example of the rich man and begin to make demands. The rich man in the parable speaks to Father Abraham himself, telling him to send Lazarus to help him and his family out — as if speaking directly to Lazarus was beneath him; as if Lazarus was his servant. White culture, too, instructs black people to relieve us from the burdens of our racism, to explain it, and to excuse it, and to show us how to get rid of it.

But the sin of the rich man is not Lazarus’ problem to fix. He has already suffered enough. A great chasm has opened between him and the rich man, and it is the result of the rich man’s failure to act. Father Abraham says: your brothers have Moses and the prophets.  If they want a different outcome, they should listen to them.

What does this parable have to say to us?

What if the white people here have the part in the story of the rich man’s brothers – alive, oblivious, and enjoying our riches?  What if the parable can be, for us, a warning bell and a call to action?  God has given us the great gift of Jesus, and Jesus in turn directs us to the wisdom of Moses and the prophets: Love your neighbor as yourself.  Thou shalt not kill. Or, from the psalm this morning: “Happy are those whose help is in the Lord their God, who executes justice for the oppressed, gives food to the hungry, sets the prisoners free, lifts up those who are bowed down, watches over the strangers, upholds the orphan and the widow.”

Listening to these teachings, I hope that we as a community will be moved to action.  There are so many things we can do. We can open our hearts to truly grieve those who are killed and to cry with those who suffer. We can pray for our police officers, and demand changes to the systems in which they operate, rather than making them the scapegoat of our national crisis. We can continue to learn about our privilege, whatever forms of privilege each of us have; there will be at least two opportunities to learn about white privilege through our church this year, including a series on the book Waking Up White beginning in October. We can listen to black voices, and use our various forms of privilege to amplify them.  We can use what wealth we have to support black-led organizations that are working to protect and uphold black lives.

We’re not dead yet – and God has not abandoned us in Hades. She offers us all the teachers that we need to be a part of the movement to make her Kingdom come. Thanks be to God.

Here are a few resources I found helpful:

“Where to Go from the Anger in Charlotte,” by Charles H. Ramsey, a former Philadelphia police commissioner and a co-chairman of President Obama’s task force on 21st century policing.

A video from Black Lives Matter leader Alicia Garza clarifying the goals of the movement.

To All My White Christian Friends Regarding Recent Events, a blog post by Latrice Ingram.