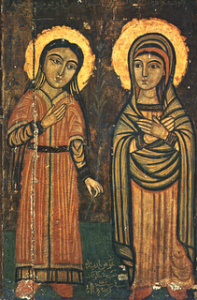 So far in our travels through the first few hundred years of Christianity this summer, we have focused on individuals, and particularly on leaders of early Christian communities. These communities developed in mostly in cities as the gospel spread along trade routes. But as early as the third century of the common era, the followers of Jesus began a new experiment. They began to seek God away from the city, out in the deserts of Egypt, Palestine, and Syria.

According to tradition, this movement began with Anthony the Great. He was an Egyptian, and the son of Christian peasant farmers. Hearing the instructions of Jesus in the 19th chapter of the gospel of Matthew (19:21), Anthony decided to take the radical step of following them literally: he sold all his possessions, gave the proceeds to the poor, and sought to follow Christ. For him, this meant seeking solitude in the desert.

Over time, many followed Anthony’s example: women and men, alone and in small groups and later, in organized communities. As the last great wave of Christian persecution came to a close in the Roman Empire, and Christianity began to gain acceptance, out in the desert there was a new alternative to martyrdom for those who wanted to give their whole lives to their faith. Those who came to the desert to live were known as the Desert fathers and mothers, the Abbas and the Ammas.

What was so special about the Abbas and the Ammas? For one thing, they were spiritual explorers, testing all kinds of techniques to get close to God. They abstained from physical pleasure, engaged in manual labor, and fasted regularly. They sought inner quietness as well as maintaining outward silence. They practiced continual prayer and regular scripture reading. They challenged themselves to avoid anger or judgment towards their fellow seekers. They provided hospitality to those who came to visit. They developed regulations for healthy Christian community life that became the basis for later monastic movements. All of these practices were meant to help them achieve the ultimate goal: loving God and neighbor better.

Through their practices, despite some mistakes, many of the Abbas and Ammas did indeed draw closer to God. They became wise, and their reputation for wisdom spread throughout the ancient world. Many believers come into the desert to ask for their advice; and ever since that time, other followers of Jesus have studied their sayings. Thankfully, they were recorded; we have a wonderful and eclectic collection of stories and proverbs from different Abbas and Ammas.

Despite the fact that prayer was so central to their lives, there are few writings concerning prayer. Perhaps this is because, in their understanding, prayer was not a special or separate activity. Prayer was an orientation, a life turned towards God; and so everything they wrote about concerned prayer implicitly. I am particularly drawn to some of the sayings that do deal specifically with prayer.

Abba Anthony’s story about his discovery in the desert illustrates a fundamental principle of monastic (and perhaps all religious) life.  By alternating regular prayer with work, we can free ourselves from the limits of our minds, allowing God to change us. Amma Syncletia’s words on prayer are refreshing because they don’t portray this practice as a tedious duty.  Instead, she tells us honestly that prayer can be a battle; but also a joy.

It may seem strange to talk about the Abbas and the Ammas this week. There is so much going on right now in the news to draw our attention: war, ebola, mental illness, painful racial tensions and police standoffs. There is so much to be angry about, so much to mourn, so much that we have yet to do to realize God’s kingdom on earth. Why travel back almost two thousand years?

God, we know your heart is breaking over our world, and our hearts are breaking, too. Grant us the courage to still be people of faith, people of hope, carriers of your light, proclaimers of your gospel. Surround us with saints who know heartbreak, too, and who have journeyed even through smoke and fire to know you. In the powerful name of Jesus we pray: Amen.