Does This Offend You? 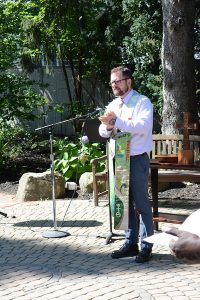 I spend a lot of mental and emotional energy doing all I can not to offend people. I strive to be very careful with my language, especially when it comes to how I refer to someone’s identity. I am mindful of using “person first” language, not identifying someone by a psychiatric or physical diagnosis, because identifying someone by one characteristic of their being is to dismiss and erase them as a whole person, thereby doing violence to their dignity, which is offensive.

I try to stay informed about the most-up-to-date language that folx use to signify their sexual orientation, their race or ethnicity, and their physical and psychological realities — recognizing that such language is constantly evolving, what was acceptable a few years ago is now considered offensive and vice versa, and that it is the prerogative of the individual to choose whatever identifying terms resonate with them. But I don’t want to offend someone by referring to them using an outdated word that hurts their heart or damages their dignity.

I even like to know the roots or origins of words and phrases I might use — as we are now learning that certain long-used idioms and expressions in U.S. American English have a basis in racism, misogyny, ableism, or xenophobia. Sometimes without knowing it, the words and expressions we use actually perpetuate stereotypes and prejudices, and can be downright dehumanizing. Still, I get it wrong sometimes, and I have to remain open to being educated or corrected.

Striving to use language that honors and uplifts my sisters, brothers, and siblings is a part of my lifelong journey of discipleship. It is an essential building block in creating God’s kin-dom here on earth. Causing an offense in that way break relationships, and it in no way advances the kin-dom of God.

There is a difference, of course, between words and expressions that are considered offensive or even vulgar, and the offensiveness experienced when a person encounters an idea that goes counter to their beliefs and values — or better yet something that challenges those beliefs and values that give a person power and privilege.

In such a case, you can expect those who are offended to strongly react against the one who has offended them. And this is where we find Jesus in today’s Gospel lesson from John.

Jesus was with his 12 Disciples and a number of his followers, teaching in a synagogue. Not long before, according to John, the large crowd — some say 5,000 people —following Jesus was encamped by the Sea of Tiberias. The day was ending, and the crowd was hungry — we’ve heard this story in the other three Gospels as well. Jesus directed the crowd to have seat on the grass, and he took five loaves of bread and two fish, he blessed them and then began giving them out to the crowd.

Of course, five loaves of bread and two fish is an absurdly tiny amount of food for such a large crowd, but we know the rest of the miraculous story: All of the people ate their fill, and there was even enough left over that it filled 12 baskets[1] — not coincidentally the same number of Tribes of Israel.

The crowd was amazed. Awestruck by this miracle, they declared Jesus to be the long-awaited prophet and savior for Israel.

Now, some days later in a synagogue, Jesus is being questioned by the religious authorities. They wanted some proof that he was what his followers claimed him to be: The Son of Man, sent by God from above, anointed to save God’s people. They demand a sign from Jesus, reminding him that Moses’s prophetic sign was the miraculous appearance of bread-like manna when the Israelites wandered the desert on the way to the Promised Land. Jesus reminds the religious leaders and his gathered followers of the recent feeding miracle — how then, too, bread appeared in miraculous abundance, nourishing all who hungered.

The religious officials scoffed. They were indignant. Who does this guy think he is? We know his parents — he wasn’t sent from God. How can he say that he is the Bread of Life sent by God from heaven? Such heresy! Such blasphemy! But that was to be the expected reaction from them.

However, this teaching also didn’t sit well with some of Jesus’s followers. They began grumbling amongst themselves saying, “This teaching is difficult; who can accept it?” Jesus overhears them and rebukes them: “Does this offend you? Then what if you were to see the Son of Man ascending to where he was before.”[3]

We might rephrase that a bit. Jesus overhears that some of his followers can’t handle what he just said. His response: “Oh, you’re offended by that? Then just wait until you hear what else I have to say! You ain’t seen nothing yet!”[4]

As Jesus continued this difficult teaching, scripture says that, “Because of this many of his disciples [that is, the followers in the crowd] turned back and no longer wanted to follow him.

Jesus’s teachings that day in the synagogue were scandalous — “scandalizo” is the actual Greek word here that gets translated as “offend.”[5] Jesus’s teachings scandalize his listeners both then and now because he proclaims that God is among God’s people — in the flesh. And the scandal of God-made-flesh is shocking both then and now because it challenges our deeply-held societal values and the social order, it upsets our privilege, it questions the legitimacy of our power and authority, and it demands that we radically reorient ourselves toward acknowledging, honoring, and serving those who are marginalized and oppressed in our society, and it further demands that we actively do something to disrupt the injustice so that we might come closer to establishing God’s kin-dom here on earth.

But friends: These same scandalous teachings are not simply confined to ancient scripture. I believe that — as people called to discipleship — we are likewise called to speak difficult truths that risk offending others — sometimes even people we know and love, people within our own communities. We don’t do this to be intentionally vulgar or to alienate people: we do this because we are compelled to share the Good News — and that is the Good News of a radical and liberating love that does justice, loves kindness, and walks boldly yet humbly with God.

Sometimes we are confronted with what seems like a choice between doing justice and not offending people. We might find ourselves risking offending people for the sake of proclaiming the Gospel. To my mind, when it comes to risking offense for the sake of justice: I choose justice. I believe that scripture outlines and Jesus teaches that we must choose justice over deference to civility or the status quo — especially when civility means tacitly condoning oppression, and the status quo means perpetuating systems of injustice.

Let me pitch a couple examples that might be familiar to you:

If my research is correct, West Concord Union Church voted in 1999 to become Open and Affirming, proclaiming to all within and outside of this faith community that you honor the inherent dignity and worth of our sisters, brothers, and siblings who identify as lesbian, gay, bisexual, transgender, and queer. And you went further, adding that you committed to “welcome persons of any age, gender, race, sexual orientation, socio-economic status, ethnicity and physical or mental ability into full membership and participation in the body of Christ.”[6]

And I am willing to bet that if you all are anything like the other 1,400-plus UCC congregations that have voted to become Open and Affirming, there was some tension. There was some disagreement. There might’ve been heated arguments in meetings or in the parking lot. There might’ve been folks who withheld their pledge and others who have not set foot inside this church since. There were folks that were offended and scandalized.

But look what you accomplished by proclaiming this stance for justice: You answered the biblical call to radical hospitality. You offered safety and sanctuary to folks who have been implicitly or explicitly unwelcome in other churches, who have been made to feel alienated from God, maybe even made to feel unloved and unwanted by God. To proclaim that you are Open and Affirming is to also boldly and loudly proclaim that you believe that every person was fearfully and wonderfully made by the God who has known them, has seen them, and has loved them since the time they were knit together in the womb.[7] That is nothing short of a beautiful scandalously holy thing.

More recently, you all made a bold decision to prayerfully evaluate how the physical space this faith community occupies might better align with your call to faithful discipleship and service to the wider community. You have taken steps to improve your environmental stewardship, and — just as importantly — renovated your sanctuary to increase accessibility and flexibility of use.[8]

I would once again bet that some amount of tension arose over the decision to remove the pews. For those who have been a part of this community for some time — maybe even stretching back generations — those pews hold memories. You might look around at them and see the great Cloud of Witnesses who came before, noting where certain beloved people sat Sunday after Sunday. Those memories are dear, and honoring them is important.

And it is equally important to turn and face the day that dawns before us — to answer the call to not only be caretakers of a sacred museum for what was, but to be midwives who can prophetically envision and embrace what is and what will be — to behold the new thing that God is doing among, and with, and through you.

There may have been and still may be those among you who were offended by this renovation: be it the financial cost, the emotional or sentimental attachment, or the sense that such a renovation would somehow make the sanctuary less sacred or holy. Yet the call to discipleship often counsels us to move through our objections and our offense in order that we might more widely proclaim the Good News.

You have opened up the sanctuary to be more welcoming and accommodating to people with a variety of mobility needs, expanding the options for folks who use wheelchairs to sit in whatever place they’d like instead in just a couple of designated spots, nurturing dignity and justice.

The greater flexibility of the space itself is an invitation to the wider community, an opportunity to rediscover your roots as a town meetinghouse where folx can gather for fellowship, education, recreation, and service. The list of possible workshops, gatherings, celebrations, concerts, special worships, meals is nearly endless. You might provide hospitality to people who would’ve otherwise never considered entering this church. And through this, you might encourage someone to engage or reengage with faith, to draw closer to God, closer to others, and closer to themselves — or at least to look at the world, others, and themselves in a new way.

My friends: The Gospel of Jesus Christ is not tame, and it will not be tamed. It is not always acceptable in mixed company, nor is it for the faint of heart. And to those who benefit from the systems and structures of injustice, oppression, and privilege in this world: it can be downright scandalous and offensive. And to each of us — even and maybe especially those of us who consider ourselves disciples — it is a challenging call. And it is a call that we must constantly choose to answer.

“This teaching is difficult; who can accept it?”

My sisters, my brothers, my siblings: I believe that you can.

You have accepted it before; you are accepting it now; and you will accept it again.