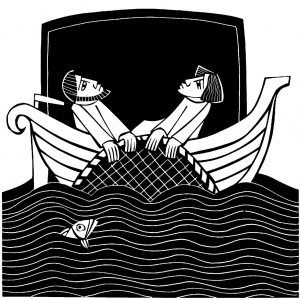 Jesus has been on quite a journey in the past few weeks as we follow our gospel readings. Late in December, he was born in Bethlehem. Early in January, he travelled all the way down to Egypt with his family to avoid the reach of Herod the Great.  Last week, Jesus was with John the Baptist on the banks of the Jordan River. Today, Jesus is ready to begin his ministry; and he begins it by traveling to Capernaum by the sea.

Why does Jesus go there? The scriptures don’t tell us directly.  But we do know that Capernaum represents a whole different world than Nazareth.  Jesus’ hometown was small, and in the middle of nowhere.  By contrast, Capernaum was three times as large, and located right on the edge of Lake Galilee. It was a place bustling with trade and marked by Roman influence. It was not far from another seaside city, the city of Tiberias, which was the capital of the ruling Roman Tetrarch, Herod Antipas.

Just in case you’re having trouble keeping your Herods straight this season, Herod Antipas is the son of Herod the Great; and like his father, he was known for his ruthlessness. In this story, he arrests John the Baptist. Historical sources tell us that John was arrested, and later beheaded, simply because had the gall to criticize Herod for getting divorced in order to remarry his half-brother’s wife. Seems like a small offense to earn the death penalty.

But getting back to Jesus: Jesus begins his ministry by travelling to Capernaum by the sea.  Why?  By travelling there, Jesus steps out into the open.  He stops hiding from the powers that have threatened his life since birth.  He begins to engage the powers that have just jailed his mentor.  Jesus decides at the age of 30 – which was not very young in those days – that it is finally a good time to claim his calling.  And he goes all in.

Jesus goes to Capernaum and he begins his ministry with one sermon: “Repent, for the kingdom of heaven has come near.”  This sermon may sound familiar. It’s exactly the same as the one we’ve already heard from John the Baptist.  In John’s absence, Jesus is carrying his movement forward. But it doesn’t take long until Jesus realizes that he’s not getting very far.  To really make a difference, the movement needs a deeper roster of leaders.

It seems like an unlikely start for something that became so significant.  The rabbi is inexperienced. The fishermen are uneducated.  Still, something draws them together. Only with the support and help of these new disciples does Jesus really gather momentum, teaching and preaching and healing and recruiting throughout the region of Galilee.

Jesus goes out in public and shares the truest words he knows.  Then, right away, he builds his team. He knows that he needs not just followers but helpers, partners, friends.  Jesus builds his team. And when he builds his team, he doesn’t recruit the flashiest and most influential team mates. He just looks around, right where he is, and finds some folks whose hearts are all in. Those fisherfolk are ready to put aside everything else to discover with him how to realize the Kingdom of God on earth.

This is the very beginning of the Jesus movement.  These are the first four of a crowd that will swell to thousands.  This is the first leg of a journey that will wind around Galilee until it culminates with a march on Jerusalem, an execution on Mt. Calvary, a resurrection in the garden, the coming of the Holy Spirit, and the birth of the Church.

Yesterday something amazing happened.  People came out of the safety of their houses to gather together in public spaces. They came out into the streets, and they said out loud the truest things they could find to say. Some words were angry. Some words were beautiful. Some words were funny. Some words were hopeful. In all, it was not such a different message than the one Jesus got from John: “Repent, for the kingdom of heaven has come near.” If you haven’t already, I encourage you to read the official platform of the Women’s March on Washington; it is a beautiful description of what it means to love our neighbors, no matter what parties or politicians we support.

So many people went out and spoke their truths, and it was beautiful.  But here’s the thing: this is just the beginning of what could become a movement.  This is just the first of what may be many gatherings. This is just the start of a new leg of a long journey towards justice for our nation and for people around the world.

If you feel called to be a part of what’s going on, remember: we cannot do it alone. Not even Jesus did that.  This is a good moment to consider, if you haven’t already: who will be your team?  Who can you count on as helpers, partners, allies, to inspire you and support you and keep you going for the long haul?  Our teammates don’t need to be famous or rich or super-smart.  More important, that they have hearts we can count on.

Let me suggest this: this faith community can be an important part of your team. When you are tired, you can rest here. When you are despairing, you can find hope here.  When you need a kick in the pants to get your act together and start doing something that you feel called to do; we’ll work on providing that for one another as well.

Jesus is calling us: right in the middle of whatever we’re up to. He says, “Repent, for the kingdom of heaven has come near.”  He says, “Follow me, and I will make you fish for people.” Something so much better is right within our grasp. God is waiting to lead us towards it, gathering us together with so many others. Let’s go for it.