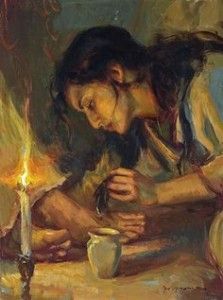 You may have heard this story before.

30 years ago, Bob Ebeling was one of four engineers at NASA who knew that something terrible was about to happen. These engineers knew that it was too cold for the rubber seals on the booster rockets to function properly on the Space Shuttle Challenger. Panicked, they went to their managers, initiating an eleven-hour teleconference the night before the scheduled launch. But despite their efforts the engineers were overruled and the launch went forward. The Challenger exploded 73 seconds after takeoff. Seven astronauts died.

This January, on the 30th anniversary of the Challenger disaster, at 89 years of age, Bob Ebeling was still racked with guilt and struggling with depression. Interviewed by NPR, he said he still felt that he could have and should have somehow done more. He felt inadequate. God shouldn’t have picked him for that job, he said. He’s prayed about it every day since. Thirty years of payers.

But an interesting thing happened when Ebeling shared his story this year. Hundreds of listeners who heard his interview sent messages of sympathy. Messages came in from all kinds of people, including a few who had been involved in the events themselves. His former boss called to remind him that it had been his initiative to call the space center and question the safety of the launch. One of the people who made the decision to launch, a man who had been painfully shunned, had the generosity to call Ebeling to say “You did all that you could do.” A former NASA official named George Hardy wrote, saying, “You and your colleagues did everything that was expected of you… You should not torture yourself with any assumed blame.” Hardy promised to pray for Ebeling’s physical and emotional health. “God bless you,” he wrote.

The acting press secretary from NASA issued a statement, too. She said: “We know spaceflight always has been, and will be, risky. Every year, we in the NASA community… pause to reflect and honor those who gave their lives for the benefit of all humanity. We honor them not through bearing the burden of their loss but by constantly reminding each other to remain vigilant and to listen to those like Mr. Ebeling who have the courage to speak up, so that our astronauts can safely carry out their missions. NASA has changed in many ways as a result…”

You may have heard this story before.

Six days before the celebration of the Passover Jesus comes to the town of Bethany, to the home of his friends Martha, Mary, and Lazarus.  It is a difficult time for Jesus. The leaders of the people have long been suspicious of him. Now they are planning to kill him. Jesus can no longer go out into the open without danger. Meanwhile, many are travelling to Jerusalem for the Passover. They ask one another: “Will Jesus be there? Will Jesus dare to come?”

Jesus has a long road ahead of him: travel to Jerusalem, teaching among Greeks and Jews and disciples, a Passover meal to say goodbye, betrayal, arrest, trial, flogging, shaming, and crucifixion.

But in this moment, Jesus is in the home of his friends. Martha, always busy with the tasks of hosting, has cleaned the house and cooked a wonderful meal. Lazarus, just recently raised from the dead, is sitting by the table, keeping Jesus company in the candlelight. Mary takes a pound of costly perfume, anoints Jesus’ feet with her hands, and wipes them with her hair. The room is filled with a beautiful fragrance.

Each of us carries a burden, shared or unshared. All of us have been broken, and we are all somewhere on the path towards healing and forgiveness. I wonder: what can we offer each other along the way? How might we lighten the load for one another? How might we be for one another a balm, showing forth in our actions the bountiful and astonishing grace of God?

I think of some of the examples I have witnessed in this congregation. Meals and flowers lovingly delivered. Notes of appreciation, encouragement, and concern. Daily prayers. Handshakes and hugs during the passing of the peace. Money given to help those in need among us. An arm around someone who is crying in the pew. A voice that sings a hymn of hope next to someone who is not able to sing that day. Hands that help in kitchen, offering hospitality for a grieving family. A platter full of strawberries, dipped in chocolate, awaiting a widow when she arrives home from the funeral parlor. A private concert from our beloved choir last Sunday afternoon for a fellow member who is dying.

We are nearing holy week, when we remember how Jesus poured out his life for us. Maybe that offering was possible because of the kindness he received himself: Martha’s hospitality and good cooking, Lazarus’ sympathetic company, Mary’s tender and extravagant gift.

What about Bob Ebeling, the challenger engineer? His eyesight was too weak to read the messages he got, so his daughter Kathy read them to him – day after day, week after week, so many messages. At first, it didn’t seem like they made a difference, but eventually, his mood started to shift. When Ebeling heard from those who had been there that day, and from current NASA representatives, his eyes and his mood brightened.

“I’ve seen a real change,” his daughter said. “He doesn’t have a heavy heart like he did.”

“I know that is the truth, that my burden has been reduced,” Ebeling said.

His interviewer asked him one more question. “What would you like to say to all the people who have written you?”

“Thank you,” Ebeling said. “You helped bring my worrisome mind to ease. You have to have an end to everything.” He smiled, raised his hands above his head, and clapped.

God, help us to ease one another’s burdens and be balm for one another’s wounds, showing forth your amazing grace, that we may all someday be healed.  Amen.