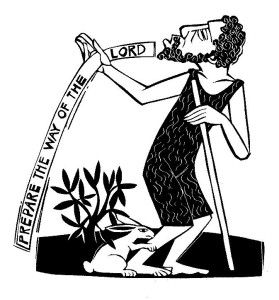 On the second Sunday of Advent each year, we always get to spend some time with a prophet named John. He’s the one known for baptizing people, as well as wearing camel’s hair, eating insects, and giving fire and brimstone sermons.

John has a very simple message for us: Repent, for the kingdom of heaven has come near!  Just one sentence.  But what does it mean?

The Kingdom of heaven is also sometimes called the Kingdom of God or the realm of God. We use these words when we’re trying to describe a time or a place or a reality in which God is in charge, and everything has changed so that it’s just the way God would want it to be.

The Kingdom of heaven is drawing near, John tells us, so we need to repent.  I would guess that repenting isn’t on the top of anyone’s to-do list today. It sounds dreary, and hard.  But to repent is simply to turn. When we repent, we decide to change direction with what we’re doing. Sometimes we may need to turn all the way around, to make a 180 degree turn. Sometimes we just need a little course correction, a small shift that will make a big difference over the long run.

The kingdom of heaven is drawing near, and we need to turn. John asks us to turn away from all the things we do that harm our neighbors and God’ creation.  John asks us to turn towards any sign of the Kingdom of Heaven. We’ve got to pay attention, so that we can chart a path for ourselves that’s leading in a holy direction.

John is an intense guy, and he’s really serious about this life change we need to make. He says: everything that is not good in us needs to be cut away. Every habit we have that leads away from the kingdom has to be left behind or burned up. Then we will be ready when Jesus comes to ignite the Holy Spirit within us, changing us from the inside out.

Repent, for the Kingdom of Heaven has come near! It’s a really good sermon in one sentence. But it is a little short on details.  How, exactly, do we turn towards God’s way?

For help with that, we turn to another prophet tod

ay. Her name is Ella Baker.  Ella Baker is a woman who spent 50 years fighting for civil rights and human rights in our country. She grew up hearing the stories of her grandmother, who had been a slave.  She knew where we had been as a country and she could see what still needed to change.  She came to believe that change happened locally: through the grass roots, through all of us and not just our leaders. She said, “strong people don’t need strong leaders.”

Although you may have never heard of her, you may have heard some other words she said: “Until the killing of black men, black mothers’ sons, becomes as important to the rest of the country as the killing of white mother’s sons, we who believe in freedom cannot rest.”

Ella Baker also said: “Give light, and people will find a way.”  Those words were turned into a song . I think it’s a great continuation of John the Baptist’s sermon, to help us get a sense of how we can turn towards the Kingdom of heaven together: giving light, teaching peace, and standing together.