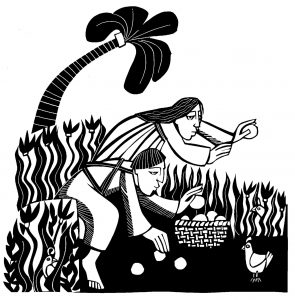 The psalmist proclaims this morning that God brought the people Israel up out of slavery in Egypt with joy and with singing. However, when we meet those same Israelites in our second reading from the book of Exodus, their mood is not quite so cheery.  At this stage in their story, the jubilation of a miraculous escape has faded.

Now the Israelites are on a seemingly endless journey, out in the middle of nowhere, without enough to eat or drink. They are tired. They are hungry. They are afraid.  So, they do what humans do everywhere when we find ourselves in a bind: they turn to their leaders and complain. “If only we had died…in the land of Egypt, when we sat by the fleshpots and ate our fill of bread; for you have brought us out into this wilderness to kill this whole assembly with hunger.”

In other words: this is awful, and we blame you.

Moses and Aaron aren’t too thrilled to be on the receiving end of these complaints.  It seems a little hard to be blamed for helping people escape from slavery. And Moses and Aaron didn’t come up with the idea of escaping from Pharaoh by themselves. In fact, neither of them really wanted anything to do with the whole Exodus project. They simply gave in to God’s insistent instructions.

So, Moses and Aaron do what humans do everywhere when we find ourselves blamed for unfortunate events: they pass the buck. They tell the people, “What are we, that you complain against us? Your complaining is not against us but against the Lord.”

In other words: God’s the one who’s really in charge around here. Look to God, if you want things to change.

We began our series on the Reformation two weeks ago talking about the pre-reformers, John Wycliffe and Jan Hus. Then, last week, we spent a little time with Martin Luther, who started the Reformation proper with his indignation over the church practice of indulgences. This week, we turn our attention to yet another famous reformer, a Frenchman named John Calvin.

Calvin began his professional life as a humanist philosopher and lawyer. In the early 1530s, he experienced a conversion, and turned his life over to God. The newly Christian Calvin found himself in sympathy with those in Paris who were urging reform and renewal in the church. Eventually Calvin’s beliefs became so dangerous in France that he fled to Switzerland. There he wrote his famous Institutes of the Christian Faith, a book of systematic theology. He established himself as a pastor and a city leader in Geneva.

Calvin is famous today for many things. One of them is his preaching. While he was in Geneva, Calvin preached more than two thousand sermons, sometimes preaching seven times a week. Each sermon lasted for more than an hour and he did not use notes.  This guy had a lot to say, and he was methodical about sharing it. Calvin seems to have worked his way slowly through biblical books as he preached, so that he gave two hundred sermons on Deuteronomy – in sequence – over the course of a year. I wonder how that would go over here.

But today, what I want to highlight most about Calvin is not his amazing preaching record, but his theological emphasis on what he called the Sovereignty of God.

For one thing, believing in the Sovereignty of God means believing that only God is God.  This may seem obvious, but we don’t always act as if we believed it.  If only God is God, than no one else is. We are not God.  Our leaders are not God.  Money, or ideology, or the church is not God. Only God is God; and anyone or anything that pretends to have God’s ultimate authority is a sham.

Let’s get back to the Israelites. What happens to them?

When we left them, the Israelites were in the midst of complaining extravagantly and passing the buck.  They don’t come off very well in this passage.  But perhaps we need to have more sympathy for them. For one thing, they are actually starving.  And they are also suffering from a less obvious burden: a lifetime of enslavement.  Dominance is the only kind of leadership these people know. So when push comes to shove, they expect their leaders, human and divine, to take control. They expect to be directed and  provided for.  No freedom, but also no uncertainty.

As it turns out, God isn’t interested in perpetuating the slavery model. Over and over, God proves herself to be by definition a liberator. This particular stand-off between God and the people in in the wilderness is just one of many in which God tries to make clear just what kind of relationship She wants with the people; and how She intends to use her considerable power.

What does God do in response to the Israelite’s complaints? God listens. God hears the complaining of the Israelites. God responds with compassion. God sends bread from heaven, meeting a need. And instead of making demands, God gives instructions; God points in a holy direction, and waits to see how the people will respond. Wanting certainty, the people are instead offered compassion, grace, and wisdom. And God wonders: what will you do with that?

This past week has been one of great turmoil: earthquakes, storms, and political strife. It’s the kind of week in which it’s easy to long for a God who is in control of everything: A God who uses her considerable power to prevent us from doing bad things, and to fix the bad things around us.

That’s not the kind of God we have. Our God is powerful beyond human measure; the ultimate power in the universe. But the power of God is not a power of dominance, a power of enslavement. Instead, it is a power of liberation. God’s power works in and among us, inviting us into alignment with God’s will. God’s power works despite us, bringing resurrection after tragedy. Like the Israelites, we are called to unlearn the perverse habits of supremacy and submission which we have been so carefully taught, and claim the freedom that has already been granted to us.  Like the Israelites, we have the opportunity to choose our responses to God’s compassion, grace, and wisdom.

Dear God, there is so much pain on earth today. Hear our cries of distress. Listen to the needs of your people, and the needs of your creation. In your love, grant us what we need to take the next step on our journey. Help us to recognize the opportunities we have to join in your work of justice, peace, and joy. Amen.