Is That in the Bible? 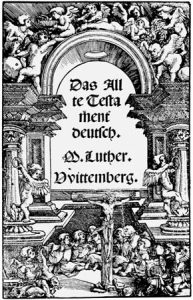 Martin Luther nailed his 95 theses to the door of All Saints Church in Wittenburg five hundred years ago this month, detailing the mistakes of his church. Word spread far and wide, and one of the first people to learn about it was the Pope. At first, the Pope responded gently.  He sent theologians to argue with Luther and to test his ideas.  After three years, however, it became clear that this approach was not working. So the Pope sent Luther a papal bull, a public decree, threatening him with excommunication if he did not denounce portions of his writings. Does anyone know how Luther responded?  Never subtle, Luther burned the document. He burned a papal decree in public. Not surprisingly, Luther was excommunicated. He was named a heretic and an outlaw. His literature was banned.  It even became a crime to provide him with food or shelter.

Following this public fallout with the church, Luther’s life was in danger. He was forced into hiding, and found shelter in Wartburg Castle. As it turns out, however, this mandatory retreat from public life was the reason for one of the greatest achievements of Luther’s life. With plenty of time on his hands, Luther began a new revolutionary adventure: he translated the New Testament, the Greek scriptures, into everyday German.

Until this time, only priests and scholars could read the holy scriptures. They were the only ones trained to read the original Hebrew, Greek, and Aramaic, or the more common Latin translation. Ordinary people could not read these languages.  They had no way to know what was in the bible by themselves. Through his translation, Luther made it possible for any literate German to read the gospels. Soon, his project expanded.  Several other writers took on the work of translation as well, until together they produced a complete German bible, with 117 woodcut illustrations included.

The accessibility of the bible in German was a game changer in so many ways. It challenged the system of clerical privilege.  It undermined the power of church tradition. It helped standardize the German language. It spurred efforts throughout the world to translate the bible, and to increase literacy. Luther had an even more lofty goal for his work. Luther hoped that access to the bible would develop the ethical strength of the people.  If we would each be guided by the scriptures, Luther thought, both the church and the world could be properly reformed.

Because of Luther and his contemporaries, the idea of not being able to read the bible seems very strange. The bible is the best selling book of the year, every year. Bibles are now available in just about every human language.  88% of Americans report they have a bible in their homes. If you’re traveling, you can probably find one in the bedside table of your hotel. We have stacks of bibles available here in our church. If you ever want to use one during worship, there are some by the entry now, on the bookshelf.

Bibles are available everywhere. And we continue to value the bible as a source of authority: both for the church, and for our lives. Scripture is read in every church service.  It is the foundation of every sermon. The bible is quoted during congressional arguments and at football games.

Still, I’m not sure that the availability of the bible or its cultural authority has led to a particularly deep understanding of it. We honor the bible, without really knowing what is in it. A survey in 2015 (from the Barna group) revealed that:

Thanks to Luther, and many others, we can read the bible ourselves. But many of us don’t, even those of us who call ourselves Christian, or show up at church. Why read a book that was written so long ago, a book that can be hard to understand, a book that is sometimes used to justify such terrible things?

I can think of a few reasons.

Biblical literacy is important partly so that we go into any religious or cultural or political conversation with a clear sense of what is and what isn’t in the bible. For instance – Jesus never said anything about homosexuality. On the other hand, Jesus and Moses and many others had plenty to say about welcoming the stranger, caring for children and single mothers, preventing violence, and sharing our wealth.

We need to know what’s in the bible if we want to be part of discussions in which the bible is given authority.  The bible is also a powerful tool for drawing us together.Biblical stories still connect us across many divides in this country and around the world.  They have also inspired some of our most remarkable art and music.

But the most important reason to read the bible today is that it will provoke us.  The bible doesn’t let anyone who reads it seriously sit back in self-satisfaction. Rather, to all of its readers it brings a challenge to be yet wiser, and more faithful, and more attuned to God’s will.

I imagine most people here today have heard the ten commandments before, even if you could not have named five of them without a little review. We’ve heard these rules for faithful community life. Some of us have heard them so often that it’s hard to even really pay attention when they’re read. But read them this week, keeping in mind the horrific shooting in Las Vegas, and they have something provocative to offer us.

Commandment #6 is relevant, of course: You shall not murder. We still don’t seem clear in America that murder is bad enough to be worth preventing. We protect one another in this country with recalls of faulty cars and drop-side cribs.  Still, we make it remarkably easy to murder one another, through the unregulated availability of machines specifically designed to kill hundreds of people with great speed.  Commandment #6: what would it be like to take that commandment seriously?

Americans have put guns on a pedestal. We imagine that they can eliminate evil, ensure safety, confer limitless power. But guns too often facilitate evil. They have been shown again and again to make us less safe.  Their power is a power of destruction.  Do we really want to put our trust in guns above all else, or bow down before the gun lobby?

The bible reminds us that worshiping God means that murder must be unacceptable to us, and that guns should not replace God in our  hearts.

We may not believe, as Luther did, that the bible should stand as the only authority in our life together. After all, the bible is a library of books about God as experienced by humans. It is a human document, containing human flaws and contradictions. And there is a great deal of wisdom to be gained from other sources: science, nature, art, other faiths.

Still, we hold the bible in great respect in the church.  This ancient repository of wisdom, inspired by the Holy Spirit, has the capacity to liberate us from illusions that would enslave us. It asks fundamental questions that force us to examine our lives.  It gives provocative instructions that come into conflict with our habits and ideas.  It strives to point the way for us towards God: a living power of love.

I encourage you to make friends with your bible, if you have not already. If you don’t have a bible at home, I would be more than happy to give you one to take with you today. Stick with the greatest hits, if you want: read the gospels, and the psalms. But read it. People have literally risked their lives to get this book into your hand. Because they knew: this is a gift from God: that can bring greater clarity of understanding, greater faithfulness of action, greater freedom to live and love.  Perhaps there is yet hope that, as Luther intended, this book can be a tool for moral revival, for the reformation of both the church and the world. May it be so.

Thanks to the devotional “Got Bible?” by Kenneth L. Samuel from A Study Guide for the 500th Anniversary of the Reformation by the UCC’s Stillspeaking Writers’ Group for lifting up the survey results and suggesting themes for this sermon.