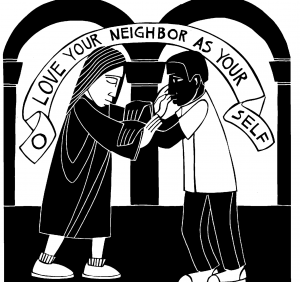 How can we love this law?

Last week we began struggling with this strange passage from Jesus’ Sermon on the Mount in the gospel of Matthew. Jesus takes passages of scripture and pieces of everyday wisdom, and stretches them until they are almost unrecognizable.  Through this teaching, Jesus urges us not to simply obey the letter of the law, but to struggle with its underlying intent.  Jesus invites us into a much more challenging kind of discipleship.

Last week’s instructions from Jesus are hard: for example, he encourages us to strenuously avoid both anger and lust, basic human experiences. But if last week’s teachings were hard, this week’s sound unbearable. Jesus tells us, if we are struck on one cheek, to offer up the other.  He says, that if we are forced to go one mile, we should go two.  He says that instead of simply loving our friends or our neighbors, we must love our enemies and pray for those who persecute us.  Here is a spiritual challenge for several lifetimes.  Here is a law that may be inspired by love, but seems both cruel and impossible.

This particular passage in scripture is one that suffers a great deal from our lack of understanding of its original context.  Taken at face value by a modern audience, it sounds like Jesus is instructing us to be door mats.  No matter what anyone asks of us, we should give it, and more besides. No matter what anyone does to us, we should take it; and even encourage further abuse.  This is a dangerous message, especially for those of us who have experienced violence, whether personal or systemic.

This scripture passage can, however, be understood in an entirely different way.* Let’s start with turning the other cheek.  If someone in Jesus’s culture hit a social inferior, they would use the back of their right hand to strike the other person’s cheek. The intention was not to injure, but to assert dominance; to demean the other person. By turning the other cheek, the person who has been struck presents their attacker with a strange dilemma. The attacker will either have to use their left hand, which can only be used for unclean tasks, to give a backhanded blow; or they are forced to strike the left cheek with their right fist, which signals a fight between equals.  With one simple action, the person who was struck forces their attacker to choose between degrading themselves or elevating their victim.  Either way, turning the other cheek is not an act submission, but rather a creative interruption of everyday humiliation. (Act it out with a friend if you’re confused!)

What about going a second mile? In Jesus’ day, Roman soldiers were allowed to force subjects like the Jewish people to carry their baggage as they traveled. However, this arrangement had a limit. Military law stipulated that these subject peoples could only be forced to carry soldiers’ baggage one mile.  If a person carries a burden two miles, the soldier whose baggage they are carrying could be found guilty of breaking military code and disciplined by flogging or public shaming.  Going a second mile, then, again, is not an act of submission to those who have power, but an ingenious way of asserting agency and putting into question the whole arrangement.

It is a mystery to me how Jesus ever got the reputation of being a pushover.  Yes, his love leads him to unexpected actions and serious consequences, including death on a cross.  But Jesus is never cowardly.  Instead, he is brilliant practitioner of non-violent resistance. This is what he’s teaching to his followers. In situations of injustice, Jesus says, do not fight or flee.  Instead, surprise everyone with a disruption of what is evil, and open up the possibility of a new reality.

What does this mean for us? Few of us, thankfully, are frequently slapped by our social betters or forced to carry a Roman soldier’s burden. What might following Jesus’ guidance look like for us? Here are two examples from the recent news.

Mona Haydar is a Muslim woman living in Cambridge. Witnessing increasing Islamophobia in our culture this winter, she said to her husband, “What if we did something kind of crazy?”  They decided to set up a stand outside their local library with a big sign that read: Ask a Muslim, Talk to a Muslim: free coffee and donuts.  Mona offered her neighbors an entirely different option than buying into the fear: the chance to share sugar and caffeine and stories with her, a real live Muslim in their midst.

A second example: some of you may know that two of today’s biggest pop stars were up against each other for major awards at the Grammys: Adele and Beyonce. Adele is a white British woman whose album was deeply personal.  Beyonce is a black American woman whose album, while also deeply personal, had serious political ramifications. When Adele won Best Album of the year over Beyonce, she spoke with gratitude but then said, in part: “I can’t possibly accept this award… the artist of my life is Beyonce, and her album is so monumental… the way you make me and my friends feel, the way you make my black friends feel, is empowering and you make them stand up for themselves, and I love you.”

Mona Haydar, and Adele. Neither of them were heroic on a grand scale. What’s important about what they chose to do is that it was surprising and disruptive. It challenged the expected power dynamics and created opportunities for everyone around them to see the world, and live in the world, in a new way. If you haven’t listened to Lemonade or watched videos from it, or read commentary about Beyonce’s album, I recommend it.

What does Jesus’ teaching mean for us?

Jesus invites us to go beyond basic decency, and to step into something extraordinary.  He invites us to walk through the world looking for opportunities to transform harmful situations, if we are oppressed or if we find ourselves in the role of oppressor by virtue of our privilege.  Jesus calls us to be loving, not by being nice, but by being transgressive, finding ways to treat each person as a fellow child of God, and as our neighbor.

This is the spiritual challenge of several lifetimes — which is why we need Jesus. We need Jesus: to remind us what we are capable of, and to give us the strength to carry it out. I don’t know about you, but loving my neighbor and my enemy has felt even more challenging in the past few months of our national life than it usually is.  I know it is my own vast privilege that makes this moment different for me than any moment that has come before.  But the challenge of this moment does not mean that we give up on the work and call it impossible.  It makes it even more crucial that we do our best to carry it out.

So I wonder: how are you taking care of your spirit these days?  How are you connecting with God, with beauty, with a force of love that is far larger than yourself?  This kind of discipleship is impossible without God, by whatever name you call her.  So turn off the news, at least some of the time; put down your ideological weapons; pull off your armor and your outrage. Spend more time than usual with scripture, in nature, in silence, with those you love: whatever works for you.  Only then will we be ready to recognize and seize our opportunities.  Only then can we love our enemies as well as those who love us. It’s the work of several lifetimes; one step at a time. Amen.

*For scholarship on these interpretations, please see Walter Wink, The Powers that Be and other writings.