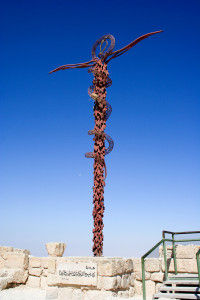 How do we keep going on a long journey?

In today’s passage from the book of Numbers, the Israelites are out of sorts. As you may remember, these are the folks who risked death to flee slavery under an Egyptian Pharoah.  They followed Moses across the Red Sea towards a promised land of milk and honey.  Forty years later, the promised land is still at a distance, and the milk and honey have yet to show up. Instead, the Israelites wake up each morning to another day of desert hiking. On the menu:  manna – which tastes, as far as we can discover, like a very bland cracker. Just imagine: forty years of nothing but crackers.

The Israelites are frustrated and impatient. They speak out against God and Moses, saying: “Why have you brought us up out of Egypt to die in the wilderness?  For there is no food and no water, and we detest this miserable food.” Forty years of crackers – it’s almost worse than not having food at all.

Soon, however, the people have more to complain about than crackers: God sends poisonous serpents among them.   The Israelites connect the dots and decide that the snakes are a kind of divine punishment for their complaints. They beg Moses to intercede with God. Moses prays on behalf of the people, and God responds: “Make a poisonous serpent, and set it on a pole.  Everyone who is bitten shall look at it and live.”  So Moses makes a bronze serpent and puts it on a pole; and whoever is bitten looks up at the bronze serpent, and lives.

What a strange story. I admit, if I wrote it, I would write it differently.  I just don’t buy the idea that God was behind those poisonous snakes.  We meet the first snake in our bible in chapter two, whispering in Eve’s ear, persuading her to go against God’s instructions and eat of the fruit of the tree in the midst of the garden of Eden. Serpents, or snakes, often symbolize evil and chaos or Satan himself in different points of the bible.

What if the snakes aren’t a divine curse?  They could be simply a natural desert hazard. Or maybe they’re a symbol for the ugliness that is brewing amongst the people in their distress. Perhaps in their hardship the people have become infected with hate or blame. These are poisonous serpents to have circulating in any community, and they can only increase suffering.

I would have written the story a different way. I just don’t buy the idea that God was behind those snakes. But however the snakes got there, and whatever they stand for, God’s response to the situation is brilliant. She doesn’t fix the problem.  She says: put a symbol of what ails you up on a pole, and take a good hard look at it whenever you get sick. That is what will help you to survive.

The Israelites had a long, hard journey.  They’re not the only ones.  I have been learning about the journey of the Standing Rock Sioux.

The great Sioux nation has three groups based on language: the Dakota, the Lakota, and the Nakota. Since the arrival of Europeans in North America, these peoples have been under constant threat from illness and assaults on their land, their livelihood, and their people.  In the 1850s, treaty violations prompted the Sioux to rise up to drive white settlers out of the Minnesota Valley. As a result, treaty payments were suspended for four years, over a thousand Dakota were jailed, and 38 Dakota were hanged in the largest one-day execution in American History.

War began again in 1876.  The US wanted ownership of Native American territory in the black hills; gold had been discovered there. The Lakota and other tribes fought back. But the United States Military won again, annexed the land, and established Indian reservations.

In 1890, the most famous tragedy occurred. The U.S. Government had continued to seize Lakota lands and violate treaty promises. It was well documented that Native American were being both cheated and starved.  There was unrest on the reservations, and as a result, settlers feared attack. On December 29th, US Troops surrounded an encampment of Lakota to unarm them. Violence erupted and 25 troopers and more than 150 Lakota Sioux were killed, including men, women, and children: the massacre at Wounded Knee.

The Sioux Nation has been on a long, hard journey.  Unlike the Israelites, who escaped slavery in a foreign land, the Sioux have faced systematic oppression in their own land. Now, the Standing Rock Sioux face a new challenge: the construction of the Dakota Access Oil Pipeline.  This project would carry 500,000 barrels of crude oil each day from North Dakota to Illinois across over a thousand miles and under Lake Oahe. The Sioux tribe argues that this construction would disturb sacred sites and contaminate drinking water.

The pipeline has received approval from all the states involved, and construction has begun, but has yet to receive its federal permit. Tribes have responded, writing letters to government agencies, meeting with the Army Corps of Engineers, and launching a campaign against the pipeline. First Nation people have gathered at the Missouri River crossing and stood in front of earth movers, in peaceful and persistent witness.  In response, law enforcement has arrived in full riot gear with semi-automatic weapons, and used tear gas.

In an unprecedented action, the Departments of Justice, Army, and the Interior called a temporary halt to the construction last week.  One protestor responded: “It is not a win, but it demonstrates that we are winning, that we remain vigilant, cautious, and prepared to put our bodies on the line in defense of Mother Earth and the protection of our rights as indigenous peoples to stop the Dakota Access Pipeline.”

I have to wonder, what prompts the Sioux nation to keep on going?  They are not only surviving in the wake of all that our government has done; they and other Native Americans are leading a movement against a pipeline that threatens not only their sacred sites but the drinking water of millions of non-native peoples and the health of our planet.

The truth has power, and in lifting up the truth, the Sioux have drawn many to their side. They proclaim  “Mni Wiconi” (Water is Life). Standing Rock Sioux Tribal Chairman Davie Archambault II says: “We don’t want this black snake within our Treaty boundaries. We need to stop this pipeline that threatens our water.”

We offer up our prayers to God.  Look at the dangerous serpents, the poisonous venom that threatens us! Wherever they come from, God does not step in to kill all the snakes for us.  But she shows us where to look, to find our own cure.  She reminds us that truth is our ally.  When we are willing to learn the truth about ourselves and others; when we are brave enough to speak those truths, however painful; we are on the path to liberation.  The journey continues but the poison begins to lose its power.

God, you know. We are each on our own journey, and we are on journeys together. Some of us have been traveling for far too long. Where should we look for help? What are the truths we need to know?  Release us from the grips of what poisons our lives.  Free us to live as you intended, with hearts full of joy, and bodies that stand shoulder to shoulder with all who demand justice. Amen.

To learn more about the Standing Rock Sioux and their work against the pipeline, try the Indian Country Today Media Network or  PBS Newshour. You can donate to support those at the camp or their legal defense fund here. You can sign a petition set up by 350.org here.