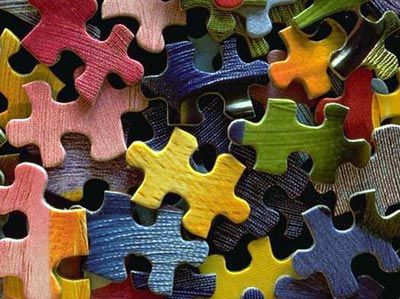 Sometimes I think that the gospel is one giant jigsaw puzzle and it’s up to us to fit all then pieces together.

My father had jigsaw puzzles made of wood which  he ordered  from a company called PAR. Each puzzle came in a plain, dark green box; but there was no picture on the cover, only a name,  “Haying Time” or “Country Fair” which gave some idea of the subject but really no clue what it would look like when finished. The pieces were all hand cut, the shapes intriguing to a small child, because some of the pieces were cut to look like hats or mermaids or shovels. Later, when I had my own puzzles, Dad wouldn’t let me look at the picture on the box. “Too easy” he said. So, over time, I would have to wait for the picture to emerge as I got closer to finishing it; and as I saw what it was going to be, it was easier to fit in the pieces.

Often there were surprises: what I had imagined was a part of a flower turned out to be an ear, or a strawberry became a clown nose. Then there was always the piece that I was just sure had migrated from other puzzle by mistake; it just didn’t fit anywhere; or, the opposite, that famous “missing” piece. Look and look until you’re cross-eyed, it’s just not there, until, of course, it suddenly shows up towards the end, looking not at all as you had expected.

Each week, here, we spend time with one piece of the gospel, taking time to hear the words and gain some insight into the meaning. Each week we look at one part of this amazing picture. And, over time, as is true when solving a puzzle, we begin to see how the pieces fit into the larger picture. It may, seem, at first that a particular verse or event doesn’t seem to fit, until we read on or study more and it becomes a part of the whole. Or what we thought meant one thing, when joined with another section, becomes something quite different. But since this happens week after week, year after year, we have become quite familiar with the finished product. Thus, unlike my father’s puzzles, without the picture on the box, we know what it’s going to look like before we start.

But what about those people gathered on the mountainside? They had no idea how things were going to turn out. Some of them may have seen Jesus before that day, perhaps they had been there on the banks of the Jordan at his baptism, and were curious to know more about this mysterious stranger. For them, a piece or two of this puzzling character had begun to fall in place. Others, perhaps, had come late and had to sit far back in the crowd. It was hard to hear him, easy to misunderstand, wonder what the excitement was all about.

Or suppose you were one of those who knew Jesus fairly well. You had been with him as he taught in the synagogues, walked with him through the villages, seen him heal people of various illnesses. You were Andrew, Mary, James, and you believed in his power, you believed God was in him and now you wait, with the crowd, to hear what he will say to them. At first, the words coming out of his mouth sound like the man you know;  promises of blessing for all those who suffer now, a place of honor at God’s side, assurance that the hungry will be fed, the most lowly will reap the greatest reward; Jesus on the side of the forgotten, the oppressed, the poor. Yes, it’s all fitting together.

But then … something you didn’t expect, doesn’t quite seem to fit. To date, the Jesus that you have known has been all about healing, blessing; hope for those who have waited a long time for someone like him. You have bathed in the light of his presence, found solace in his words of comfort. Yet he says, “You are the light of the world”. Wait, what’s this? We thought he was the light! “You are the salt of the earth.” What in the world does that mean? And then, then, “unless your righteousness exceeds that of the Pharisees”…the Pharisees?

We’re going to need to look more closely at this piece, see how it fits into the big picture.  “Righteousness” is the key word, but what exactly does it mean. It’s one of those words sprinkled throughout the Bible, most often attributed to God. In fact, the word righteousness, or righteous, appears more often in the Bible than “power” and even “love.”  Which means it’s pretty important.

God’s announcements to Israel in the words of Isaiah seem almost mocking: “Day after day they seek me and delight to know my ways as if they were a nation that practiced righteousness.” As if. As if the ritual shows of fasting, putting on sackcloth and ashes is practicing righteousness. But, says Isaiah, that is not what God desires, requires. That is not righteousness. Rather; to loose the bonds of injustice, break every bond that binds the oppressed, give food to the hungry, house the homeless, shelter and clothe those who are forgotten; that is righteousness.

Jesus exhorts his listeners to exceed the righteousness of the scribes and the Pharisees. The Pharisees are faithful Jews known for study of Torah, day after day, as they seek to understand its words and follow to the very letter of the law. “And so do not think,” Jesus tells us,” that I have come to abolish the law, no, I have come to fulfill it, not one letter not one stroke of a letter will pass from the law until all is accomplished.” There is no condemnation of the Pharisees in those words; Jesus as a faithful Jew, has great respect for the law. But he is saying, they don’t go far enough. They may talk the talk better than anyone, but, you; we; are called not only to talk the talk but to walk the walk … share our bread, embrace the lost and forgotten, provide shelter and hospitality, free those imprisoned by hatred, or abuse, addiction, discrimination.

And what will that picture look like when all is said and done, when the time comes that all the hungry are fed, and the yoke lifted from the necks of the oppressed, when the guns and the swords and the words of hate are silenced forever? Who really knows? It’s a very big picture, with lots of pieces; and we’re still putting it together. But I do know one thing.  Somewhere in there, will be the face of Jesus.