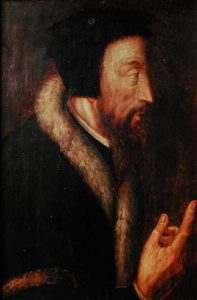 There are few stranger texts in our bible than the parable Jesus offers in the gospel of Matthew this morning. No one would want to teach this story in Sunday School. One commentator even wrote, “I’m not sure this parable is conducive to a Christian sermon at all.” So, I urge you to lower your expectations as we try to make some sense out of it.

Jesus tells us: the kingdom of heaven is like a king who gave a wedding banquet for his son. The king sends out invitations to the banquet. However, no one wants to come. So, the king sends word again, letting the guests know that there is a great menu, with lots of meat. Still, everyone has something better to do than show up at the wedding.

This story already sounds strange. Why would anyone ignore a royal invitation, especially when it’s offered twice? But wait – there’s more. Some of the folks who don’t want to come to the party are so angry — about being invited — that they abuse and kill the people sent out to invite them. The king, in turn, is enraged, and sends an army to kill and burn the whole city.

Now many of us know that wedding planning can be stressful. Family dynamics; financial challenges; people don’t always RSVP. But this case seems extreme. Every single guest has refused to attend. People have been murdered. The King has destroyed one of his own cities. One might wonder if the couple might decide to have a private family ceremony, or even elope.

But no. The King is still in search of guests. He decides to invite anyone who can be found on the street, good or bad. Finally, he has what he has wanted all along: a hall full of people. Unfortunately, someone at the wedding mars the perfection of the evening by committing a fashion faux pas. Having received a last minute invitation, he shows up at the wedding without a wedding robe. The king is so insulted by this that he has the man bound, and thrown into the outer darkness, where, apparently, there will be weeping and gnashing of teeth. Jesus concludes the parable by saying, “for many are called, but few are chosen.”

Yikes. I have so many questions. If we imagine that the king in this parable is God, as most commentators do, why is this wedding so important to her? What kind of anger management issues led to her destroying a town? Why did she send someone to eternal punishment for simply wearing the wrong outfit? What did Jesus think that this parable could tell us about the kingdom of God? And what on earth does his last comment mean: “For many are called, but few are chosen”?

The idea of being chosen by God is a theme that runs throughout our religious tradition. Our Jewish ancestors in faith have sometimes understood themselves to be chosen by God for a special fate. Augustine and Aquinas both believed that God had specific plans for us. Being chosen also became an important theological issue during the reformation, thanks largely to the writings of Calvin.

You remember John Calvin: that French philosopher and lawyer turned preacher and theologian. Fleeing religious persecution, he ended up in Geneva. He preached a lot of very long sermons without notes. He outlawed the use of instruments. And he shared some ideas about being chosen by God that went farther than anyone had ever gone before.

Calvin believed that we are all inherently sinful, as a result of the sins of the first humans. We are, to use his language, totally depraved; every part of our lives is touched by sin. And it gets worse: we have no ability to recover from our state of sinfulness by ourselves. Rather, God plans for the saving of people through Jesus, and the availability of irresistible grace. Unfortunately, not everyone gets to participate in this salvation plan. God, in God’s wisdom, has chosen, or predestined, some of us for a glorious fate, while everyone else is destined for damnation. There’s nothing anyone can do about what camp they have been assigned to.

Before you all pack up and decide to go home, because of the bizarre things we find in our Christian tradition, let me suggest some mitigating factors to help us cope with both the parable and Calvin’s theology: human experience, and human error.

Let’s begin with the parable. You may know that the gospel of Matthew was produced by a community of Jesus followers 50 or 60 years after the death of Jesus – that’s two or three generations. During the time between Jesus’ death and the recording of the gospel, the people in the Matthean community did not had a pleasant run of it.

They believed that God was calling all Jewish believers to a magnificent renewal of faith, through the teachings and resurrection of Jesus. God was like a King, who graciously invites everyone to come to a magnificent banquet. However, lots of people did not show up when they were invited. Friends, and family, and members of the synagogue, did not want to join in the Jesus movement. Some of them were downright rude.  A few were violent towards these Jesus-following Jewish people.

Therefore, when the Temple of Jerusalem was destroyed in the year 70,  the Matthean community wondered whether God was responding to the Jews who had not begun to follow Jesus. And, still wanting their movement to grow, they reached out beyond the Jewish community and welcomed in anyone who would come: anyone off the street, no matter what their background.

This story is designed to comfort the Matthean community: to give them a sense that God is on their side. But the story turns at the end. It ends with a warning: you have been invited to God’s great feast, and you have had the good sense to show up. Still, make sure that you follow the host’s rules if you want to stay. Do not be complacent

Human experience, and human error: the Matthean community puts words in Jesus’ mouth that will explain their struggle. In the process, they make the mistake of condemning those family and friends who are faithful in a different way: something I think Jesus never would have encouraged.

What about Calvin? I am far from an expert on Calvin or his time. But let me offer a theory. Calvin lived in a world in which heaven and hell were an assumed part of the worldview. Everyone knew that they existed and that people were divided after death into to one or the other, saved or damned.

What Calvin does is try to explain how God is present in this preconceived understanding of the universe. He says, God is so powerful, that it’s impossible that this does not happen exactly the way that God intends it to. Choosing gets done, and so God must be doing the choosing.

Human experience, and human error. Calvin’s experience in the church taught him what he believed about heaven, and hell, and salvation, and damnation. And therefore, he made an error: he created a theological explanation for the mechanism by which people arrived in these places which makes no sense if we believe in a loving God.

I like the idea of God as a host. God is our host at every communion meal. What kind of host would God be? I’m not sure I see God as someone who creates a VIP guest list and sends out engraved invitations and hires a celebrity chef. I’m guessing God is more of a potluck kind of person. You know, someone who sees a friend or a stranger while running errands and says, “come on over.” Someone who is so generous with their invitations that the crowd gets big, and it’s always an unexpected mix of people.

I’m not sure God’s house is always clean. Someone who’s focused on loving doesn’t always get around to dusting. No one minds, though. There’s always something delicious to eat in the potluck. There’s always a good story to hear. And most importantly, there’s a down home feeling that gets inside you and makes you want to smile. After dinner, the music starts. It’s a pick-up band, most nights. Sometimes a truly magnificent artist knocks everyone’s socks off.

God doesn’t ask much of people who show up. Come as you are, bring what you have. The only thing God asks is that everyone who comes tries to let down our hair, and tell the real truth, and have a good time, and love one another. We can stay all night. We can stay forever.

God, you are such a big mystery, and life is so complicated, that we get really confused about what you’re up to in this world. Whenever we are unsure, help us get back to essentials. Help us get back to love. Amen.