Rejoice and Be Glad 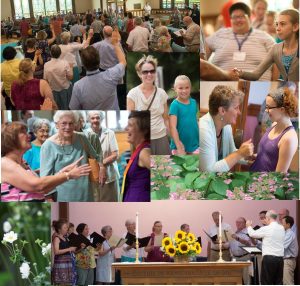 Over the past two weeks we’ve watched Jesus start his ministry. We saw Jesus at the Jordan, where he was baptized and recognized as the Lamb of God.  We watched Jesus travel to Capernaum, and begin to preach.  We were witnesses as Jesus began to put together his team, calling fishermen off their boats to become his disciples.

But as Jesus looks out at all the people who have shown up in our scriptures today, he doesn’t celebrate his success. He doesn’t try to consolidate his popularity.  Instead, he turns around, goes up a mountain, and sits down. We can imagine the disciples’ confusion; what is Jesus up to now?  Uncertain, they gather around him, waiting for whatever is going to happen next. Then Jesus begins to preach. He begins to preach a very strange sermon. He says:

I imagine that the disciples were feeling pretty good about themselves before this mountain top trip.  Sure, they’d thrown away their livelihoods and left their families to follow an inexperienced rabbi reformer. They’d taken a big risk.  But that risk is definitely paying off!  They are at the right hand of the most famous religious leader around. With all of his wisdom and all of his influence, surely the future must be bright.

But Jesus, with his experiences fleeing Herods, with his experience of the arrest of John the Baptist – Jesus has a better idea of what his team is up against. Jesus, on his mountaintop perch, sees a bigger picture.  This movement they’ve started isn’t going to be a glamorous one.  Jesus knows his disciples need something more than he’s given them so far, to prepare them for the trials that are ahead.

This week I have been reading the news. Have you been reading the news? The news is not good.  I’ll stick with just a few highlights. The healthcare of our most vulnerable citizens is under attack.  There’s a policy up for consideration that would make discrimination against LGBTQIA folks explicitly legal.  The Attorney General nominee has a documented history of racism and hate speech. The Keystone Oil Pipeline is back. The EPA is under attack. There are executive orders to block, jail, and deport immigrants and refugees based on their religion and nationality.  The Christian faith, and the standard of honesty, are being twisted into strange contortions in public discourse.  For those of us who believe in love of neighbor, and care of creation, and Jesus, and democracy, the news is not good.

So, let’s all take a deep breath. How should we react to this news?  Anger and grief and fear are appropriate. Venting may be necessary. Comedy is helpful. Civic engagement is powerful. I am watchful, though, of other reactions that are tempting but dangerous: Demonizing elected leaders or fellow citizens. Judging those who are just beginning to stand up against injustice. Indulging in despair.  Deciding to withdraw entirely out of fear or disgust.

What can we learn from our teacher, Jesus, about how to handle a difficult struggle? If we take this Sunday morning to turn away from the chaos of the crowd and go up the mountain to consider the bigger picture; what will we learn?

I heard a story last month about a man named Julio Diaz. Maybe you have heard this story; it played on NPR. Julio Diaz is a social worker from the Bronx who commutes on the New York City subway. One day he’s getting off the train when a young teenager pulls a knife on him and demands his wallet. Julio doesn’t resist; he gives up his wallet. But as the teenager is walking away Julio says, “Aren’t you forgetting something? If you’re going to be robbing people for the rest of the night, you might as well take my coat to keep you warm.”  The teenager hesitates. He says to Julio, “What are you doing?”  And Julio says, “If you’re willing to risk your freedom for a few dollars, you must really need the money. All I wanted to do was go get dinner. If you want, you could come and join me.  You’re more than welcome.”

So Julio goes into a diner, and the teenager goes with him. They sit together in a booth. It’s a diner Julio goes to several times a week; everyone there knows him.  People come by and say hello to him – the manager, the waitresses, the dishwasher. He greets everyone warmly. The teenager he’s with is blown away. “Do you own this place?” he asks. “No,” says Julio, “I just eat here a lot.”  “But you’re even nice to the dishwashers!”  “Yeah,” says Julio, “didn’t anyone ever teach you to be nice to everyone?”  “Sure,” says the teenager, “but I didn’t know that anyone actually did that.”

They talk a bit, over dinner; Julio asks him what he wants to do with his life. The teenager doesn’t answer. Finally the bill comes and Julio says, “Well – I guess you’re gonna have to pay for this because you have my wallet. If you give me my wallet back, I’m glad to treat you.”  The teenager doesn’t even think about it. He just hands the wallet back. Julio pays for the meal, and then he offers him $20 if he’ll hand over his knife. The teenager makes the trade.

The whole thing only takes an hour. Julio doesn’t know what happened to his dinner companion after that. You’ve got to wonder what prompted Julio to try this approach at all. Most muggings don’t end with a dinner party. Julio’s not naive; he’s a social worker in New York City; he’s seen everything. But he says, “If you treat people right, you can only hope that they treat you right in return. It’s as simple as it gets in this complicated world.”

What does Jesus teach us today, as we gather on this mountaintop, in this beautiful church, away from the headlines, if only for an hour?  The beatitudes tell us that the blessings of God are available to us no matter what.  God’s love and mercy and justice are a gift that no circumstance can take away from us. These gifts of God can sustain us in any struggle; and they can also change how we choose to act in an often hostile world.

As we witness the things going on in our national politics, we who believe in love of neighbor, and care of creation, and Jesus, and democracy, could demonize, judge, despair, or withdraw.  It would only be natural. Instead, Jesus reminds us to keep doing the work of building God’s kingdom; and to find blessings in grieving, in longing, in struggle, even in persecution.  These blessings are what will enable us to persist; and to do so, as compassionate and creative human beings – not because we’re naive, but because we remember who God made us to be and because we refuse to be anyone else.

I think we can do this. We can continue to be who we are, in what may be an increasingly hostile environment. We can show up for one another, and for all of our neighbors, with our bodies, with our voices, with creativity and compassion and with hope that defies any odds.

Jesus, our teacher, has gone up to the mountain to offer his disciples some wisdom. And he says to us: No matter what you face, rejoice and be glad. Open your hearts to the blessings God is providing. Thanks be to God.