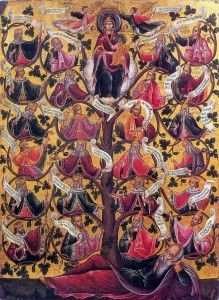 It’s exciting each year — at least for pastors — to turn from the long stretch of ordinary time that fills the summer and fall and begin a new church year with the season of Advent, the season of preparation for Christmas. Just days after most of us celebrate Thanksgiving, another holiday season begins. We add wreaths to the doors, and put candles on the table, and begin singing Advent carols.

But what are these scriptures that we hear this week? They’re not quite in keeping with the mood of the moment. Instead of setting the stage for a festive baby shower for Jesus, we hear confusing and frightening prophecies.

The prophet Jeremiah proclaims that a righteous branch will spring up. Someone will emerge from the royal lineage of David to rule the people Israel with justice.

And Jesus has his own prophecy. In the gospel of Luke, he instructs his followers to wait for his dramatic second coming at the end of all time. “Look at the fig tree and all the trees,” Jesus says; “as soon as they sprout leaves you can see for yourselves and know that summer is already near. So also, when you see these things taking place, you know that the kingdom of God is near.”

Here we are, this morning, at the beginning of Advent, eager for a holiday. But the scriptures do not cooperate. They speak of a harsher world, and a deeper hope than we may be ready for: great promises not yet fully realized.

The prophecies we heard this morning have come true in part. Jeremiah is right: as Christians understand it, a righteous branch did emerge from the line of David when Jesus was born. But Jesus never became a monarch like David. We are still waiting for justice and righteousness to be established by an earthly ruler.

The prophecies have come true in part. I see part of what Jesus described, too: there is distress among the nations and roaring of the sea and waves. But we have yet to witness the redemption he describes. We are still waiting for his second coming, for God’s kingdom to draw near.

How long, O Lord, How long? How long will we have to wait for these prophecies to be truly fulfilled?

It’s easy to feel that God has kept us waiting too long. But maybe we’ve been too focused on the “when” and not enough on the “who” and the “what.” Who is this righteous branch that we call Jesus? And what sprouting leaves will tell us that the kingdom of God is near? Maybe in waiting for something grand and obvious, we’ve missed the point.

This year, our Advent worship themes are loosely based on the “O Antiphons,” traditionally sung in the last seven days before Christmas. These invocations use some of Jesus’ many names: Root of Jesse, Wisdom, Lord, Emmanuel. Focusing on these names is an invitation to broaden our imaginations about how we may encounter God in this season.

This week, our theme is Root of Jesse. The prophet Isaiah says, “A shoot shall come out from the stock of Jesse, and a branch shall grow out of his roots” (11:1). Like Jeremiah, Isaiah foresaw that the lineage of Jesse, who was the father of King David, would continue.

Perhaps you’ve seen one of the many Jesse Trees in Christian art. They usually include the most famous people in Jesus’ adopted family tree: Abraham, David, Solomon. But these Jesse trees aren’t strictly genealogical; they often include Jesus’ spiritual ancestors as well. The visual message of the Jesse tree is this: Jesus embodies the best of all of these ancestors – he’s the freshest leaf, the newest bloom, of a great line stretching far back into holy history.

Jesse trees end with Jesus, but I wonder what they would look like if we kept drawing them up to the present moment. Who else would we need to fill in along the way? What are the other roots and trunk and branches that support us?And what have we received from these ancestors?

It always amazes me to consider how many faithful people, and how many faithful acts, made our lives here possible. Look around; all of us gathered here this morning could be considered the latest leaves and blooms of an enormous Jesse tree going back to the beginning of all time.

This Advent season, we wait and watch for Jesus’ birth, and for his second coming. But let’s not get so caught up on the “when” that we forget the “who” and the “what.” After all, one of the many names of Jesus is Lord of History. Jeremiah described a righteous branch springing up from David, and Isaiah a shoot from the stock of Jesse. But we call him today not a branch or a shoot, but a root. Jesus, in the understanding of our tradition, is both alpha and omega, the beginning and the end, the root and a branch. He has always been, is now, and will be, in many faces, in many forms.

Jesus is the Lord of History. And when he was on earth with us, he taught us that the kingdom is all around us; that the kingdom shows forth in the most ordinary ways. The kingdom of God is like yeast, leavening flour; like a net thrown into the sea, catching fish of every kind. Two thousand years ago, Jesus taught us, the Kingdom of God was already very near. It is at least as near today.

The prophecies we hear today have not yet been fulfilled in their entirety. We are still waiting in anticipation for the establishment of justice and righteousness. We are still aching for the arrival of our redemption, painfully so, in a week full of violence. But in the meantime, God is growing in and up through us, and all around us.

So this season, whenever we see an evergreen wreath on a door; or an advent wreath on a table; let’s consider the Root, and the shoots, and the branches; the budding leaves and the blooming flowers of our tree of faith. Then, and now; here, and there, and everywhere; Christ comes to us. Thanks be to God.