Melissa Tustin shared this message as part of our all-ages worship on February 5th. The sermon begins with the preacher sprinkling rock salt on a large block of ice!

January is by far the best month to have a birthday. I’m a little biased since my brother, my aunt, my father and I were all born in January. But I bet you would agree that some truly “salt of the earth” people came into the world in January. After all, one of this country’s most courageous and transformative leaders, Rev. Dr. Martin Luther King Jr. was born on January 16th! But did you also know that Edward Verne Roberts, the Father of the Independent Living Movement, was born on January 23rd?

Since 2010, the state of California has officially observed January 23rd as Ed Roberts Day. There is a picture of Ed Roberts on our bulletin today and the quote from him. As you can tell, Ed was one of the most outspoken warriors for the disability rights movement. Let me tell you more about this truly “salt of the earth” human being: 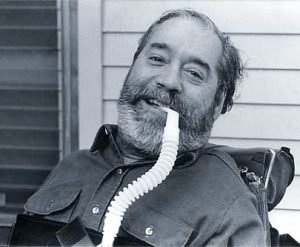 “…And that’s the greatest example, that we, who are considered the weakest, the most helpless people in our society, are the strongest, and will not tolerate segregation, will not tolerate a society which sees us as less than whole people. But that we will together, with our friends, will reshape the image that this society has of us.”

“[Ed’s] career as an advocate began when a high school administrator threatened to deny his diploma because he had not completed driver’s education or physical education! He also had to fight for the support he needed to attend college because his rehabilitation counselor thought he was too severely disabled to ever get a job…His admission to UC Berkley broke the ice for other students with severe disabilities who joined him over the next few years at what evolved into the Cowell Residence Program. The group developed a sense of identity and elan and began to formulate a political analysis of disability. They began calling themselves the Rolling Quads to the surprise of some non-disabled observers who had never before heard a positive expression of disability identity. In 1968, when a rehabilitation counselor threatened two of the Rolling Quads with eviction from the Cowell Residence, they organized a successful ‘revolt’ that led to the counselor’s transfer. Their success on campus inspired the group to begin advocating for curb cuts, opening access to the wider community and to create the Physically Disabled Student’s Program, the first student-led disability services in the country. In 1976 Governor Jerry Brown appointed Ed Roberts Director of the California Department of Rehabilitation—the same agency that had once labeled him too severely disabled to work.”

Ed Roberts is directly responsible for the installation of the first curb-cut in the United States. I daresay every single person here has benefited from his legacy. The more I learn about Ed Roberts and the many, many other saints of the disability rights movement, the more surprised I am that this history is rarely taught in schools. I was fifteen years old when the ADA, the Americans with Disabilities Act, was passed but I don’t recall learning anything about the events that pushed it through. The ADA had been stalled in Congress for months when there was this incredible demonstration known as the “Capitol Crawl” that pushed it through. On March 12, 1990, sixty disability rights activists left their wheelchairs and crutches behind and crawled up the steps of the Capitol Building. I can’t imagine a more effective way to shine a light on the injustice of having inaccessible public buildings.

But that’s not all. By far, the most iconic image from that day and some say the reason Congress HAD to pass the ADA is Jennifer Keelan, just 8 years old, crawling up those steps. In all the pictures, she has this determined expression on her face, as only an eight year old girl can make, with a flag bandana wrapped around her head. What strength she had, what courage and that was not even Jennifer’s first demonstration! She got involved in the fight for disability rights when she was six years old and was arrested for the first time when she was just seven! Jennifer and her mother, Cyndi actually helped draft the original ADA law! Talk about salt of the earth! The irony is that despite having been involved in the drafting of the ADA, Jennifer and her mother have experienced significant discrimination and even homelessness in their home state, Colorado. But they have never given up. Jennifer currently lives in AZ and is pursuing her goal to become a pediatric occupational therapist. 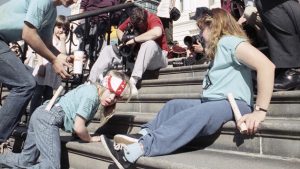 A group of handicapped people led by 8-year-old Jennifer Keelan, left, crawl up the steps of the U.S. Capitol in Washington, March 12, 1990, to draw support for a key bill now pending in the House that would extend civil rights to disabled persons. The group of about 1,000 people or rode in wheelchairs down Pennsylvania Avenue from the White House to the Capitol. (AP Photo/Jeff Markowitz)

Clearly, there is more work to be done, in the fight for equal rights for people of all abilities and in so many areas. It has been a difficult month. Laws and leadership are changing in this country and to many it feels like the world is becoming a colder, more dangerous place, especially for immigrants, Muslims and those living in poverty. But history has shown and our faith teaches that in every age and time, God has sent her prophets to shine a light on injustice and to salt the earth with courageous words and actions. We can draw strength from the ones who came before us like Dr. King and Ed Roberts and Jennifer Keelan. We too can shine a bright light on the injustices of our time just as they did. We too can use our voices to melt the fear and cold-heartedness that is so often behind discriminatory laws.

When I started this sermon you watched me sprinkle salt on this big block of ice. The whole time I’ve been preaching, that salt has been melting the ice. I want to invite the children to come up and use some liquid watercolor to reveal the holes and cracks the salt has already made in the ice while I’ve been talking. These colors represent the inroads God has already been making through the leaders and the activists who came before us as well as the places where Jesus is calling us to be the salt and light in our time. As the children come forward, we need to acknowledge that the struggle for justice is not easy. As Theodore Parker once preached and Dr. King often repeated, “The arc of the moral universe is long but it bends toward justice.” I’ve been hearing that many of us are finding we need new habits and practices to help us stay energized while facing problems we know will take time to solve. So while the children are up here revealing the colors of God, I invite the rest of you to name the practices that are energizing you these days. They don’t need to be explicitly religious to be helpful. For example, reading the comics is one of the ways I remind myself to find joy in each day no matter what’s on the front page of the newspaper! Salty language is another helpful practice for me in the right circumstances. What about you?

Answers: Taking walks, listening to music in the car instead of the news, coming to church every week, praying, etc.

Thank you for sharing your energizing practices and thank you kids for revealing God’s colors. I can see that God’s prophets are just getting warmed up! And what’s more, the one we call Light of the World, goes before us! For that, in every age and time, we are blessed. Amen.