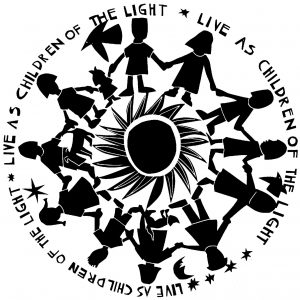 Our gospel story starts out simply enough. Jesus and his disciples come upon a man who has been blind from birth.  Jesus spits on the ground, spreads mud on the man’s eyes, and tells him to go and wash in the pool of Siloam. The man goes, and washes, and receives his sight.

The story could have ended there. Instead, it goes on – and on – and on, adding more and more characters, more and more conversations (you saw how many people we needed to just represent most of the groups in the scripture).

A man has received the gift of sight from a stranger. His life is utterly transformed.  But the story goes on. And somehow this event that could be a blessing for him turns out to be a problem for everyone else.  His neighbors don’t throw him a block party, or help him get started on a new career.  His rabbis don’t offer him spiritual counsel in his time of transition, or give thanks to God. Even his parents don’t have his back.

Everyone’s first reaction is doubt. They doubt his identity, his honesty, and his faith. They subject him to a long series of interrogations, and try to get him to change his story. This man is driven out of town for being on the receiving end of a miracle and refusing to lie about it.

Why is this story in our scriptures?  Many scholars believe that this story is about the Johannine community – the community out of which the gospel of John emerged. They argue that this community is telling its own story through the story of the man who was born blind.

These outcasts were utterly transformed.  But what was a blessing for them turned out to be a problem for everyone else.  People they had known all their lives were mystified and frightened by their beliefs.  Religious authorities saw them as a threat to orthodoxy. In discovering how they could finally fit in, these followers of Jesus got pushed further out of their society.

Everyone kept telling the followers of Jesus that they had it all wrong.  Their faith grew anyway. The Johannine community became so committed to their faith, that they were willing to endure suspicion, experience exile, and even risk death.  No one would believe them, but they kept telling the truth about their own experience.  As a result, we have this gospel; and millions of people’s lives have been changed.

In our society, in the past 50 years and more, something extraordinary has happened.  Many people who used to be outcasts have begun to find acceptance. Movements for civil rights, for women’s rights, for gay rights, for disability rights, for trans* rights, for the rights of the mentally ill, for a right to health care, for a living wage, for religious liberty; these movements have gained traction and changed both hearts and laws.

This change has happened, at least in part, because people trusted in that principle so fundamental to our democracy: that all people are created equal.  This change happened, at least in part, because people believed that message found at the core of so many religious traditions, including our own: that every person has sacred worth.  Outcasts in our society kept claiming these truths, and sharing their stories, even when no one would believe them. And slowly, painfully, those at the center, full of power and privilege, including myself and my ancestors, we found ourselves forced to begin to acknowledge and accept those we had dismissed.

Unlike the man who was born blind, and unlike those in the Johannine community, we are unlikely to be rejected by our neighbors because we follow Jesus. Sure, we live in New England.  Some neighbors may think it’s odd or quaint or a little bit backwards to go to church.  Sure, we are in the United Church of Christ.  Some relatives and friends may question whether we are following Jesus in quite the right way.  Still, admitting to following Jesus is unlikely to get us driven out of town if we are brave enough to say anything about it.

There are other areas, though, in which it might feel more dangerous to express the truth that is in us, even to ourselves.  Some of us have an old wound that has never been exposed to light and air in order to heal. Some of us are struggling with illness, or addiction, or depression; with a strained relationship or financial distress; and have not yet been honest enough with ourselves or anyone else to begin to address the problem.  Some of us may be neglecting a surprising gift or an inconvenient calling. All of us have something we could be more honest about, if we want to heal and to grow.

It strikes me in the gospel story that the man never asks to receive the gift of sight. The fact that Jesus gives him sight without his consent flies in the face of modern sensibilities.  Regardless, the man takes hold of his new reality with gusto. When Jesus puts mud on his eyes, he goes immediately to wash in the pool of Siloam. He tells the truth to everyone about what happens, no matter the consequences. And by the end of the story, he declares to Jesus, “Lord, I believe.”  While so many of us hide our hurts and our gifts and our beliefs, this man is a model for how to share our testimony with the whole world.

It’s an uncertain business. People may not believe us. People may even become angry if what we have to say contradicts their assumptions, or their interests. But we can’t let fear rule our hearts. After all, there’s nothing  we could reveal that can separate us from God’s love. God loves us all, and She has a particular fondness for oddballs, and outsiders, and sinners of all stripes.

It’s only when we tell the truth, that things begin to change, within us, around us. So let’s tell the truth, no matter what. Who knows what could happen..  Maybe something extraordinary. Thanks be to God.