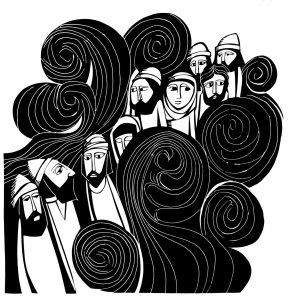 This summer here at West Concord Union Church we have been exploring songs of the bible, of which there are more than 185. We started with the longest song, and then the most popular one. We’ve heard a song from Deborah, a judge and prophet; and two from David, that great king and musician. Today we hear two songs of Moses, which are the first and last songs in the bible.

The first song in the bible is found in the Book of Exodus. God has called Moses to lead his people up out of slavery in Egypt. Reluctantly, Moses agrees. With the help of God, his siblings, and many others, Moses convinces Pharaoh to let the Israelites go. But just as the people are nearing freedom, Pharaoh changes his mind, and the people are trapped between the shores of the Red Sea and an Egyptian army.

You know this story. God tells Moses: stretch out your arm. And Moses stretches out his arm, and the Red Sea parts.  The people walk forward on dry ground, with water on either side. When they have safely crossed, the water closes in again. And Moses and the people sing a song sometimes called the Song of the Sea: “I will sing to the Lord, for God has triumphed gloriously; horse and rider have been thrown into the sea. The Lord is my strength and my might, and has become my salvation; this is my God, who I will praise, the God of my ancestors, who I will exalt.”

They go on singing, praising God as majestic in holiness, and awesome in splendor.  And they describe the fear of other peoples in the face of their God. Then the prophet Miriam, Moses’ sister, takes a tambourine, and leads the women in playing, dancing, and singing: “Sing to the Lord, for God has triumphed gloriously; horse and rider have been thrown into the sea.”

John, imprisoned on the island of Patmos for sharing the good news of Jesus, receives a message from the resurrected Christ. This message is for seven churches in Asia: a call to repentance and a promise for those who are faithful. The message comes in the form of fantastic visions including angels, beasts, catastrophes and plagues.  Amidst all this there is a choir standing beside a sea of glass with harps of God, singing what is described as the song of Moses and the song of the Lamb.

The choir sings: “Great and amazing are your deeds, Lord God the Almighty! Just and true are your ways, King of the nations!  Lord, who will not fear and glorify your name? For you alone are holy. All nations will come and worship before you, for your judgements have been revealed.”

The first and the last songs in the bible. Both, songs of Moses. But are they the same song, or different songs?

These two texts agree on a lot. God is amazing, powerful, and unique. God inspires fear and awe. But these songs were recorded more than 500 years apart, in dramatically different contexts, and this shows up in the text as well.

Exodus was recorded in the 5th century bce, based on much earlier oral and written traditions. It was written by and for a Jewish audience. Exodus focuses on how God liberates oppressed Israelites in the midst of many powerful, competing nations. Therefore it is with relief that the text imagines the members of other nations quaking before the God of Israel: “pangs seized the inhabitants of Philistia…trembling seized the leaders of Moab; all the inhabitants of Canaan melted away.”

The book of Revelation was recorded close to the end of the first century of the common era. It was written by and for an early Christian audience. Its vision was formed in part by the large, diverse Roman Empire from which it emerged, a political entity larger than most people had experienced before.  Revelation focuses on the redemption and unification of all people in the newly forming church. And so this song imagines God’s power as a uniting rather than a conquering force: “All nations will come and worship before you.”

It is dangerous to read two scriptures together in dialogue, Hebrew and Greek alongside one another.  It’s easy to compare and contrast without remembering context. Christians in particular are famous for our inclination to interpret our more recent Greek scriptures as an improvement on the Hebrew texts.

I wonder if instead of claiming one song of Moses and deriding the other, we might receive some wisdom from both of these songs today.  Their visions are different, but still complementary. We can remember, with the Israelites by the Red Sea, that the work of our powerful God is to free the enslaved, lift up the lowly, undo human injustice, and bring down those who misuse power. And we can also embrace the Christian impulse, sometimes to aggressive, to invite and include all people into the good news of God.

You all may be aware that about a month ago, the United Church of Christ conferences of MA, RI, and CT all voted to form a new conference together.  I don’t know how much you’ve talked about this at TriCon. The decision made the Boston Globe, but I’m sure some of you have not yet heard about it, and others may not care.  Perhaps you imagine that this is simply downsizing, or deck chair reorganization. Let me suggest otherwise.

These southern New England conferences saw an opportunity, as conferences with greater resources, to be leaders in a new way of being church: a more connected way, and a more powerful way. As local churches, and church organizations, rapidly change and die around us; as our nation faces new challenges; this is a Moses moment. God is calling us to do a new thing; to be freed from old bondages and old sins, for a new future.

Recognizing together that God is our strength, our might, and our salvation, United Church of Christ congregations across southern New England can put our common mission above any individual, regional, or even denominational pride. The hope of this new conference is that in working together with one another, and strengthening our partnerships with those of other churches, those of other faiths, and those of no faith, we can amplify our efforts for justice and compassion, and glorify God.

I speak of this today as we at West Concord Union Church and Trinitarian Congregational Church begin our shared summer worship time as a way of saying:what if we begin here – in Concord?  I see incredible strength for good in the various congregations and organizations in Concord, and I think that strength could be multiplied if we were more connected around the values that we share.

Friends, God is holy. She redeems us, and guides us, through challenges both personal and political. Our ancestors in faith have testified to this for more than 2,500 years. So let us give thanks, for the wonders she has achieved; and open our hearts to the new possibilities she lays before us. Amen.