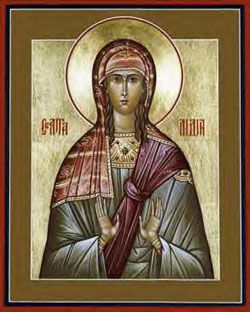 Last week we began a series on the saints of the early church. We heard about Phoebe, a deacon, and Junia, an apostle. This week our attention turns to Lydia, another leader who Paul engages to serve the church. In fact, through the reading in Acts, we get to witness the scene of her conversion.

Paul, Silas, and Timothy are seeking a new mission field. After many frustrations, Paul has a vision that a man in Macedonia is pleading with him to come and proclaim the good news there. So the three believers sail to Philippi, a leading city in Macedonia and a Roman colony. It was a city of particular economic prominence, because it lay on the major trade route between Rome and Asia.

Normally, in a new town, Paul sought out the synagogue, and began teaching there. But he had never been so far west of Jerusalem before, and perhaps there was no dedicated building, or no organized group of Jewish men in prayer. Instead, on the Sabbath day, Paul and Silas and Timothy venture out of the city gates and discover women gathered by the river, praying. They begin to speak with them, and God opens Lydia’s heart to listen to everything Paul has to say. And that was enough: one morning of conversation. Lydia and her household are baptized, and she urges Paul and his companions to come and stay at her home.

Like so many early saints, we know very little about Lydia. But we do know that she came from what is now western Turkey. She was probably of Greek, rather than Roman, descent.  We’re not quite sure why Lydia moved to Philippi. It may have been because of her increasing interest in the Jewish faith, which drew disapproval from her neighbors at home. It may also have been simply a shrewd business decision. Lydia was a trader in purple dye and perhaps also purple cloth. It was a lucrative trade, especially right along a major trading route. Purple dye was a luxury item, used to color the cloth worn by emperors, and government officials, and priests. It was obtained from snail shells, and prized because it did not fade easily in the sun.

Lydia was an independent woman of means – a rarity in that time and place. Some imagine she must have been a widow. This is the most likely explanation for the fact that she seems to be the head of her household; neither a father nor husband is mentioned in the text. Lydia initiates the baptism of her household, and gives her invitation of hospitality, without needing to consult anyone else. But maybe she was just ahead of her time.

We also know that Lydia’s conversion, though sudden, was sincere. Not only did she immediately welcome Paul, Silas, and Timothy into her home; she invited them back, after they completed a stint in the local prison. And after their departure, Lydia became one of the founders of a new church in Philippi, and provided a house for the church would gather. This community became strong, and Paul’s affection for it was great. In his letter to the Philippians, he calls them: my beloved and longed-for bretheren, my joy and my crown.

In the many years since she lived, Lydia has become famous. She is known as the first European convert to Christianity. She is the patron saint of cloth-dyers. And in the Orthodox Churches she is known as “Equal to the apostles.” A church is now located at Phillipi, built in her honor, and a modern baptistery has been placed on the traditional site where Lydia was baptized.

But these titles and honors don’t capture why Lydia is compelling to me. I am struck by the complete openness of her heart, which led her to give her life and share her resources so readily. What would it be like, to be that open to the good news of God, that welcoming of the presence of Christ in our lives?

Lydia’s other outstanding gift, I think, is hospitality. How many of us have offered a band of religious travelers a place to stay, or taken them back in after a prison stay? Lydia’s hospitality is so inspirational that an innovative faith community gathering today in Brooklyn, which holds what they call “dinner church” twice a week, calls themselves St. Lydia’s.

God, thank you for the faith of your saint, Lydia. Through her example, may we learn to have open hearts, and open homes, showing forth the warmth and love of Jesus in our own lives. Amen.