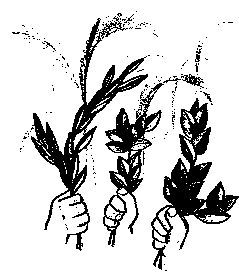 Today, Jesus leads us into the political realm. In the events of Holy Week, we watch as a whole society fails one another. The merchants and the moneychangers betray their faith by turning the temple into a marketplace. Judas betrays Jesus for a bag of coins. Jewish leaders hand over one of their own to the Romans out of fear of how his actions might disturb a fragile peace. And finally, Roman leaders give in to the voices of the crowd which cries, “Crucify him!”

So many relationships are damaged and broken, in this week that we call Holy. So many people makes mistakes, and the end result is that a man who sought peace is violently executed. So many people make mistakes — but this year, I have found my attention resting mostly on the mistakes of the crowd.

But at some point, the crowd shifts. It’s hard to know why. Maybe they begin to wonder what Jesus might ask of them, or how he might change things. Maybe they begin realize just how much force is arrayed against him. However it happens, the crowd’s shift from “Hosanna” to “Crucify him” makes all the difference.

This past week something unusual happened. The Episcopal bishops issued a unanimous statement about what is going on in our country. And then, even more surprisingly, the leaders of our denomination, the United Church of Christ, signed onto that statement, too. Here is what it says:

“On Good Friday the ruling political forces of the day tortured and executed an innocent man. They sacrificed the weak and the blameless to protect their own status and power. On the third day Jesus was raised from the dead, revealing not only their injustice but also unmasking the lie that might makes right.

In a country still living under the shadow of the lynching tree, we are troubled by the violent forces being released by this season’s political rhetoric. Americans are turning against their neighbors, particularly those on the margins of society. They seek to secure their own safety and security at the expense of others. There is legitimate reason to fear where this rhetoric and the actions arising from it might take us.

In this moment, we resemble God’s children wandering in the wilderness. We, like they, are struggling to find our way. They turned from following God and worshiped a golden calf constructed form their own wealth. The current rhetoric is leading us to construct a modern false idol out of power and privilege. We reject the idolatrous notion that we can ensure the safety of some by sacrificing the hopes of others. No matter where we fall on the political spectrum, we must respect the dignity of every human being and we must seek the common good above all else.

We call for prayer for our country that a spirit of reconciliation will prevail and we will not betray our true selves.”

How can we follow the example of Jesus in the midst of political turmoil? How might we use our influence as members of the crowd in this time and place to change the outcome of the story unfolding in this nation?

How might we follow the example of Jesus in the midst of the political turmoil here and now? What might courage and compassion from the crowd accomplish in such a time as this?