The Song of Deborah 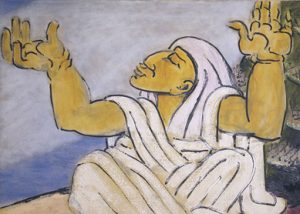 So far in our series on biblical songs, we have heard the longest song and the most popular one. Both were songs of praise. Today we hear another song of praise, most often known as the song of Deborah.

Who, you may ask, is Deborah? You may never have heard of her, but Deborah was both a judge and a prophet in ancient Israel.  Deborah sits in the shade of a palm tree in the hill country, settling disputes between the people. She serves as a military leader. She receives messages from God for the people. What’s more, Deborah does all of these things so well that she is known as a Mother in Israel, a mother of the people. If Deborah got her due, we would all know her name.

Over and over again in Israelite history, the same story repeats. The people Israel abandon God; God allows foreign leaders to oppress them; the Israelites cry out to God; and God raises up a leader to guide them to freedom and peace. In our story this morning, that leader is Deborah.

This time, when the Israelites do what is evil in the sight of God, they become enslaved by King Jabin of Canaan, whose military commander is named Sisera. Deborah summons an Israelite named Barak and gives him a command from God: “Go to Mt. Tabor with ten thousand troops. I will draw out Sisera, and I will give him into your hand.”

Barak is not so sure that this is a good idea. After all, Sisera has nine hundred chariots of iron. Who would want to go up against that? Barak says to Deborah, “If you will go with me, I will go; but if you will not go with me, I will not go.”  In other words, put your money where your mouth is. Deborah promises to go with Barak. However, she warns him that his victory in battle will not lead to his glory; Sisera will be killed by the hand of a woman.

As the story continues, everything happens as Deborah has predicted. The army of Sisera is routed. Sisera flees, only to be killed by a woman named Jael. Soon, the Israelites are free of King Jabin.  Then there is a long song, praising God as well as many people for the victory. The song of Deborah: “ Lord, when you marched, the earth trembled, and the heavens poured… the mountains quaked before the Lord, the One of Sinai, the God of Israel.” And the land had rest for forty years.

I have to admit that I have profoundly mixed feelings about this story, and this song.  On the one hand, it is deeply refreshing to see a woman in leadership in the bible. Plus, Deborah’s not just any leader.  She does it all: adjudicate, strategize, command, and prophesy.  She does it all, and she does it all well.

It may help, here, to know that the song of Deborah is among the most ancient songs in our bible.  It comes from a time and place where each people, each tribe, had their own god. When the people clashed against each other in the quest for land and power, they saw their gods at work in whatever outcome emerged. As the Israelites, a very small nation in a vast sea of empires, saw their independence overtaken again and again, they explained their fortunes through the lens of divine retribution and compassion.

This theology is problematic in any time period, and certainly when applied to modern Christianity. We see it often here in our own context, as all too many people have come to believe that a Christian God has chosen the white people of the United States of America as his chosen people today. They imagine that those of us who fit that description are being oppressed, just as the Israelites (and early Christians) were. This fantasy of oppression allows folks to ignore the very real privilege and power of white Christians in America, and in the world. All too many folks see God at work in new forms of social, political, and military dominance.

I hope we can take a different lesson from the text this morning.

This story was probably recorded later, while the Israelites were in exile, under the power of the Babylonian empire.  From that moment in their national story, the Israelites turned to their history to ask critical questions: Did God forsake us? Has God forgotten us?

Retelling the story of Deborah and Barak and Jael, and celebrating the people’s release from slavery at the hand of the Canaanites, is a way for Israelites in the Babylonian period to reassure themselves that God does not hold herself apart from their history. Instead, God accompanies them through it.

This week has been a devastating one in the news for many of us who consider immigrants, refugees, Muslims, and laborers, to be kin to us.  It is natural to grieve for what has happened, and to fear what may yet come.

However, this is not the time to forget God, to give up on God, to despair. To be honest, I am sometimes ashamed of my own lack of courage, when I witness the determination and hope of those whose lives are much more immediately impacted by our country’s failures of justice and compassion.

What did the Israelites do in exile in Babylonia? They remembered another time of suffering. A time when they cried out to God, and God was still with them. A time when God raised up new leaders; surprising leaders, faithful leaders, skillful leaders; women, among them.  They remembered that story, and sang their old song of victory. “March on, my soul, with might!” as the song goes.

Beloved, have courage; we can go on. God is still with us; we have our stories of liberation, ancient and new; and we have one another. Thanks be to God.