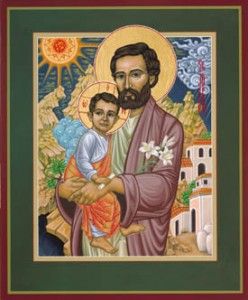 Today, the liturgical calendar tells us is the celebration of Jesus’ baptism. When he came down to the river and was baptized by John. The church traditionally regards this act as the beginning of Jesus ministry. A lot of time has passed between his birth which we celebrated just a few weeks ago and now. It’s worth asking, what happened in the meantime. How did Jesus get from the stable to the river?

Many years ago, when my granddaughter Olivia was a toddler, she had one of the Little People nativity sets, plastic figures, plastic barn, plastic hay.. When we arrived for Christmas that year she was very excited to show it to us. First the lambs and cows and angels which were high on her list of importance, then shepherds and magi and finally, the stars of the show…Mary, the baby and..Uncle Joe!

No one knows how she came up with that, but Uncle Joe he was. I like to think that maybe she had figured out what for centuries scholars and preachers have been trying to determine. “Let’s see,” she might have wondered, “my daddy and mommy told me that God is Jesus’ father, so this guy who is always hanging around, a bit on the sidelines and not doing a whole lot, well, he must be the uncle. So Uncle Joe he was!

It’s not a bad solution, but, probably in the long run, not correct. Then who is he? Who is this loyal devoted man? Someone said once, and I believe it was the Swiss child psychiatrist Alice Miller, “that if Jesus had not had Joseph for a father, he would never have grown up to be the man he was.”

And I wonder, would he have even survived long enough to be standing in that river?
For Joseph was not his uncle. Joseph was his father. However we understand how Jesus was conceived in Mary’s body, Joseph was indeed Jesus’ father; maybe a stepfather, a foster or adoptive father or maybe biological; in any event he did what a good father always does, he protected his child.

Robin read a passage from Matthew this morning that describes Joseph’s dreams. When Herod learned from the wise men that the King of the Jews had been born, he determined to kill all boys under the age of 2. That night, in a dream, an angel appeared to Joseph and told him to take Mary and the baby far away, far from Herod’s murderous rage. Joseph took Mary and Jesus, and I imagine it was in the middle of the night, he took them to Egypt and there they stayed until, in yet another dream, Joseph was told that Herod had died and it was safe to return home. Yet when they got back to Judea, Joseph had another dream. “Take Mary and the baby to Galilee,” for Archelaus, Herod’s son who had succeeded him, could be just as big a threat. And so Joseph and his family settled in Nazareth in Galilee. All this travelling down to Egypt and then back to Nazareth was in part a literary device that Matthew used to fulfill ancient prophecies about the messiah; Matthew liked to do this kind of thing as it would make sense to his Jewish readers. But whether or not it happened that way is not a concern right now. What’s central to these dream narratives is that Joseph paid attention to his dreams and acted on them. He believed that, in his sleep, he heard the voice of God and obeyed

Years before, according to the reading from Isaiah, God chose Cyrus, king of Persia as his anointed, to storm the gates of Babylon and free the Israelites who had long been in exile there. Cyrus would receive treasures of darkness as a reward. What were these treasures? Gold, silver, precious jewels from the nations that the Babylonians had defeated; that were hidden in underground vaults, in secret.

“I will give you the treasures of darkness”. Again and again throughout biblical history God bestows men and women with treasures of darkness . They are not gold or silver, however, but still riches hidden in secret places; deep inside where dreams and visions and intuition dwell. God’s covenant with Abram while he slept, Jacob dreamt that God had a purpose for him not once but twice, Samson’s mother was told in a vision that her son who would defeat the Philistines. And, then of course, there’s Mary, who learned from an angel that she would bear the son of God.

Could dreams and visions like these have any meaning for us? Granted, most of us don’t see angels on our doorstep or going up and down ladders, but we do dream. And we have intuition, thoughts that seem to pop up out of nowhere. Instinct can often be our best guide. In silence, in meditation, in prayer through dreams we will often hear a still small voice .

Dreams are God’s forgotten language. I love that thought. God’s forgotten language. It’s the title of a book by John Sanford, an Episcopal priest as well as a Jungian analyst. Sanford treated patients with long standing emotional and spiritual illnesses by listening to and working with them to understand what their dreams were telling them. In almost all cases, his patients were healed. The dreams along with Sanford’s patient guidance, healed them. God’s forgotten language. A language which we hear only when the busy mind is quieted, when the world outside falls away and when we take the time to stop, to breathe, to be in touch with the inner world. You may believe, as I do, that that is the voice of God. In any case, it is a message from our true self, the self that is in touch with soul and spirit.

Which is not to say that some dreams can be very scary, waking us up in the middle of the night in a cold sweat and a pounding. Heart. Fear for our children, for our ever-more violent world, for the health of the planet; anxiety about work and health and memories of traumatic past are more like nightmares than dreams. They’re not fun. We’d rather distract ourselves by all matter of means. And if work and overpacked schedules aren’t enough for that, social media seduces, 900plus tv channels, movies on demand, videos, smart phones smart watches, virtual reality, whatever that means. It’s time to take off the google glasses and gaze within.

I think that Joseph would have been very scared by his dreams. Imagine being told in the middle of the night that his newborn son would be killed if he stayed in Judea. Imagine how cold and difficult a journey he would have to make with a new mother and a helpless baby. Then when all seemed safe again once again was told to pick up stakes once again and move on, twice a refugee. He might have wondered, how was he to find work, would there be a home there for his family? Do I really want this dream? Do I really have to obey?

At all costs, and in spite of all the risks, Joseph did.

Which is why, if Jesus had not had Joseph for a father who would care for him and keep him safe, he might never have grown up at all.

In fact, without Joseph, Jesus might not ever have been born. For Joseph had had an earlier dream. When Mary was pregnant “an angel of the Lord came to Joseph in a dream and said “Joseph, son of David, do not be afraid to take Mary for your wife for the child which is conceived in her is from the Holy Spirit. She will bear a son and you are to name him Jesus.”

Now that’s what I call a scary dream!! You hear that your wife to be is not only pregnant but pregnant with the child of God! How many men would take that job? It would be bad enough to endure all the whispers and snickers that that would surely come his way, but to be asked to raise the son of God? Who’s equipped to do that? Why not let God raise him?

What do you think would have happened if Joseph had divorced her quietly, as he was thinking of doing previously? Mary, a poor pregnant peasant teenager, what would happen to her? Would she keep the baby? At the very least, she would have been ostracized, her family shunned, sent somewhere outside the community, most likely without adequate food or shelter, not enough to keep herself and the baby alive.

I think it’s fair to say that, if it hadn’t been for Joseph, Jesus would never have been born.