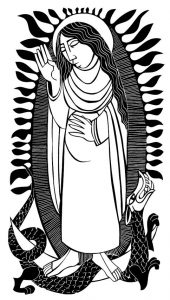 Imagine if you will, a picture of Mary: Mary of Nazareth, Mary, the mother of Jesus.  Even those of us who did not grow up Catholic have seen plenty of images of her, the most famous woman in our Christian tradition.  Imagine Mary. If you are like me, the Mary that first comes to mind is white, and young, and very beautiful. A soft light shines around her. Her eyes are downcast. Her expression is peaceful. Her hands are folded in prayer, or wrapped around the Christ child. Mary is passive. Mary is quiet.

Western culture has made Mary into our ideal woman. She tells us just what women are supposed to be like. But it turns out that the Mary we see in Christmas cards and church statues and museum portraits is not the Mary of the bible.  The biblical Mary is not white. She is not passive. And she is not quiet. On the contrary, Mary is a loud woman.

When we first meet Mary in the bible, she doesn’t have much to say. But that’s probably because she is having the shock of her life. An angel appears to her, and tells her that incredible things are about to happen: a spiritual pregnancy, a royal son. All Mary can get out of her mouth in that encounter is a question: “How can this be?” ; and then, finally, a response: “Here I am, the servant of the Lord; let it be with me according to your word.”  Or, to paraphrase, “Ok, I guess if this is what God has in mind we can go ahead.”

Mary takes a moment to get her bearings. But as soon as the angel leaves, she springs into action. Mary hits the road, defying morning sickness, hurrying through the hills to see her cousin. Why are there no pictures of Mary on the move? Mary with a climbing stick, Mary with a rucksack, Mary with dirty sandals, sweating in her rush to share her news?

When she has something shocking and important to tell, Mary seeks out the company of women. As far as we know, she doesn’t share her news with Joseph at all. Instead, she wants to talk with her kinswoman.  Perhaps she imagines that Elizabeth is more likely to believe what she has to say.

Incredibly, Elizabeth does believe Mary, with the help of the Holy Spirit. In fact, Elizabeth figures out the news even before Mary shares it. And so begins the most extended conversation between two women that I can think of in the bible. Elizabeth exclaims with a loud cry, “Blessed are you among women!”  And Mary responds, “My soul magnifies the Lord, and my spirit rejoices in God my savior!”

Elizabeth and Mary literally shout with enthusiasm. Two loud women. And in the midst of their exclamations, there is another woman there, too, in spirit.  Mary is riffing on the words of her foremother Hannah.

The biblical Mary is a woman with a voice — a strong voice.  She has a voice that is stronger because she has listened to the witness of other women.  She has a voice that is stronger because she can speak to other women.  Mary has a strong voice to proclaim God’s good news.  For this conversation between two pregnant women isn’t about nursing, or nappies, though perhaps they talked about that later. Why not. Both of them understand that what they’re a part of is not only personal but also political: part of a plan in which justice and mercy will transform the world.

Mary is nothing like we usually imagine her or see her portrayed.  She is a unmarried poor woman of color with a strong voice who cries out for justice.  Mary is one of a mighty host who prepare the way for the women who are crying out in this season.  There have been many loud women through the years, testifying to both devastating truth and astonishing hope. And a great many of these loud women have been women forced to the margins: enslaved women, Black women, Latina women, Trans women. For instance: Anita Hill. For instance: Tarana Burke.

We also need change in the church. Discrimination and harassment and abuse have taken place here, too. In the church universal, and in this local church. Some of you are aware that a former pastor here, Dick Bauer, who served in the 60s and early 70s, and was beloved by many, was eventually removed from the ministry due to sexual misconduct. This misconduct occurred in several congregations he served in Massachusetts and Connecticut, including West Concord Union Church.  It’s not a secret.  It’s also not something we talk about much. It’s not pleasant to talk about. But unless we tell the truth about these things, with loud voices, we are a part of the problem: complicit in silencing testimonies that need to be honored. Complicit in upholding structures of oppression that need to be torn down. Failing in our duty to reckon with the past and ensure that the church, and our church, is a safe space for all people today.

Mary did know. Mary was the first human being to know.  God told Mary, and Mary is the one who told all of the rest of us. Mary may even have been the one to break the news to Jesus. She certainly helped prepare him for the life he would lead.

Mary of Nazareth said to Elizabeth:
My soul magnifies the Lord, and my spirit rejoices in the God who saves me.
For God has recognized and blessed a humble servant.
Surely, from now on all generations will call me blessed;
For the Mighty One has done great things for me, and holy is God’s name.
God’s mercy is on those who regard her with awe, from generation to generation.
God has shown strength with her arm, scattering the pride of the proud.
God has dethroned the powerful, and lifted up the lowly.
God has filled the hungry with good things, and sent the rich away empty.
God has helped her servant people, in remembrance of her mercy,
According to the promise she made to our ancestors:
To Abraham and his descendants forever.

Thanks be to God.