Who Are We to Hinder God? 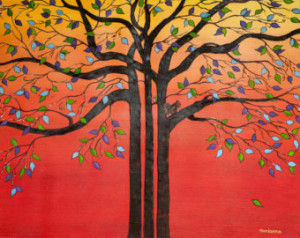 It all starts when Peter is invited to the house of a Roman Centurion named Cornelius.  Peter is not supposed to accept hospitality from any gentile, let alone a Roman Centurion, a leader in the colonial power structure. But the Holy Spirit whispers in his ear, and so Peter goes.  When he arrives, Peter receives another surprise. The house is full of people, and they all want to hear about Jesus! Peter hedges a little, but then he goes ahead and gives his stump speech, a short summary of the whole incredible Jesus story. It’s a good sermon, if you want to look it up (Acts 10:34-43).

Peter begins to give his speech to this crowd of outsiders who want to hear about Jesus —  and then things really get crazy.  As Peter is speaking, the Holy Spirit comes upon the crowd and they begin to speak in tongues and praise God, just like the crowds do at the feast of Pentecost.  Peter is so overcome by awe and gratitude that he goes ahead and baptizes the whole lot of them. Then, to cap it all off, he decides to stay on as a guest for several days, eating and sleeping in Cornelius’ house. Peter is in trouble.

Now you may be asking – “What’s the big deal?”  Peter is just doing his job. He’s spreading the word about Jesus. Isn’t this a stroke of luck, a wonderful action of God, that Peter comes across all these gentiles who want to hear more?

Consider the context, though. All of the very first followers of Jesus were Jewish, just like Jesus.  They follow the customs of the Jewish faith, including practices concerning food and table fellowship and circumcision. This is how they have always lived, and part of what binds them together. These practices are a sign of their devotion to God.

As the word about Jesus begins to spread, however, more and more non-Jewish people become interested in following him.  These newcomers are people for whom these food guidelines had no meaning.  The idea of circumcision in particular is less than attractive.  These folks also differ from the first followers of Jesus in other ways: in wealth, in social position. The Jesus-following community has some big decisions to make: What should we eat?  Who should we associate with?  And most importantly, who can be baptized into our fellowship of faith?

Peter is in trouble because he answers all of those questions on his own while far away from the community.  Moved by the Spirit, he eats with people he has never eaten with before.  He shares the story of Jesus with people he isn’t even supposed to associate with.  And then he baptizes a whole crowd of people who no one had ever imagined would be part of this movement.

Peter is in trouble.

In the two creation stories at the very beginning of our bible, we learn of a God who creates the whole world: sky and earth, seas and dry land, plants and every kind of animal, including human beings.  Everything is made by the word of God, by the hands of God.  Our scriptures teach that this creation that surrounds us, in all its magnificent diversity, reflects our maker.  We are in it, and a part of it, and our role is to be stewards of it all.

Human beings, however, have gotten very good at separating ourselves from the rest of creation.  We see it as fundamentally distinct from ourselves. Instead of being stewards of the earth, we have become tyrants, taking what we want and leaving behind whatever is convenient to throw away.  Instead of recognizing this creation as intrinsically related to us, part of us, part of God, we have treated it as consumable and disposable.

But things have gone even further than that.  We are also separating ourselves from other human beings.  Those of us who have wealth, most of us white, have created spaces with organic produce and clean air and soil and water. Seeking our own health and longevity, we concentrate the negative effects of our global lifestyle on those who can least afford to deal with them: those who live by waste dumps or bus depots. Those whose homes will be below sea level in a few short years.  We are separating ourselves even from our children and grandchildren, the next generations, who will live or die with the legacy of what we have done to the earth; wealth will not protect them forever.

God made this beautiful earth, and us as a part of it. And we have set up the barriers.  So what do we do, now?  The scriptures remind us how much we have in common; how deeply we are related; the holiness of our common source.  How do we put this belief into action and begin breaking barriers down?

It starts, of course, at home. Each of us needs to use less: less buying, less travel, less water, less energy for us and our families.  Then there is our faith community. Thanks to the hard work of trustees and then stewards, we have already invested in better insulation, better lighting,  programmable thermostats.  Now with our renovation we are thinking bigger.  We’re definitely going to get new windows and new doors, better air locks and better air sealing.  Depending on the results of our research and our capital fundraising, we may also be able to move from oil to gas, add solar panels, replace inefficient steam heating with hot water.

We are working at reducing, and reusing, and recycling as individuals and as households and as a community of faith.  We’re working on reducing demand. But there is a bigger picture, too, that we can be a part of. It’s a question of supply.  The leader of our conference, Jim Antal, has invited us to be part of a movement to “Keep it in the Ground.”

There are great stores of coal and oil and gas, stores of carbon, that can be found underground in a few places in the earth.  If these resources are dug up and burned, they will push us over the edge, overwhelming our planet’s physical systems.  Through political action, we can help prevent these stores from ever being used. We can block pipelines from being built and shut down coal mines. And through financial action (both personally and institutionally), we can help businesses realize that carbon is a risky investment. We can move our money away from companies whose business plan will break the planet. Meanwhile, we give folks working on alternatives to fossil fuel more time to build a transition to clean energy. You can learn more here.

What happens to Peter?  It’s an amazing story.  When Peter rejoins the group in Jerusalem, they have some big questions for him. But Peter gives an account of how it all happened, and he ends with these words:  “I remembered the word of the Lord, how he had said, ‘John baptized with water, but you will be baptized with the Holy Spirit.’ If then God gave them (the folks at Cornelius’ house) the same gift that he gave us when we believed in the Lord Jesus Christ, who was I that I could hinder God?”

When the apostles and the believers in Jerusalem hear this from Peter, they are silent. And then they praise God and give thanks for the new members of the church, the members they never wanted or expected in the first place.  It’s an amazing moment, and it fundamentally changes the nature and the future of the church.

God created this world: winter and springtime, seedtime and harvest. God made all of this; and we are so close to shutting it down. But the Spirit is been at work among us.  Her strange and extravagant ideas of a new way of living together are beginning to emerge all around us. She shows up in our dreams, and whispers in our ears. Who are we to hinder God?  How can we, like Peter and the first followers of Jesus, be open to the new ways that are unfolding in front of us? How can we find the courage to  embrace new ways that bring together all peoples and all of creation?