Who is the Greatest? 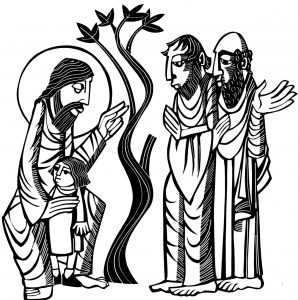 I wonder sometimes how Jesus chose his disciples.

Jesus was kind of a big deal. He was a fascinating speaker, an extraordinarily gifted healer. His presence communicated charisma and compassion. There were plenty of wandering reforming rabbis in the ancient near east, but Jesus got some of the biggest crowds.

Jesus could have chosen anyone to be part of the twelve. The most highly educated, the wealthiest, even the wisest. Instead, he chose a bunch of tradespeople. They rarely understand what he’s saying.  They are too afraid to ask questions when things get real. And in in today’s gospel, they spend their travel time arguing about which one of them is the greatest.

Apparently, Jesus hears some of the conversation that his disciples have. When they get to Capernaum, he asks them, “What were you arguing about on the way?”  But the disciples won’t own up to what they’ve been doing. I imagine them avoiding his gaze and glaring at one another, while Jesus looks on with equal parts love and exasperation.

Jesus calls the twelve to come over have a talk with him. He tells them, “Whoever wants to be first must be last of all and servant of all.” He invites over a small child, who has probably been watching them from a distance. Jesus takes the child in his arms and says, “Whoever welcomes one such child in my name welcomes me, and whoever welcomes me welcomes not me but the one who sent me.”

It’s fun to laugh at the disciples, but let’s be honest; all of us know how to play the game “who is the greatest.” It’s a game we learn early on.  Who will be picked first when the T-Ball teams are formed?  Who will rank first on the GPA list? Who is the funniest, the wealthiest, the most beautiful, the most popular?

Comparisons are famously odious, and yet we compete and compare over and over and over again. Even the bible has passages that give lists of qualifications to live up to.  The most egregious is found in the book of Proverbs, a passage detailing the attributes of a capable wife.  Apparently, the best of wives must achieve at least 25 awe-inspiring tasks and personal virtues in order to earn the praise of her husband, and prove her love of God. If only it were possible. But can a woman rise before dawn, fill her days with labor for others and words of wisdom, stay up all night, and not collapse in exhaustion?  Is this really a good yardstick for a human being?

What’s more, it seems suspicious that wives are the only ones chosen for such detailed job descriptions. What about husbands? Single people? Scripture writers?

It is this basic instinct that leads us to have different rules for different people. Who deserves citizenship? Who deserves clean air, or a park in their neighborhood?  Who is allowed to speak in the board room? Who can express anger on the tennis court? Who may seek justice for a crime committed against them?  Who is held accountable for their actions? More often than not, it depends on how we rank on the list.

Ranking hurts everyone. Most profoundly it hurts people perceived to be on the bottom, whose lives and health are at risk. Rank also hurts people on the top, who live in safety while their souls grow twisted. Wherever we end up on society’s list of power players, ranking gets inside our hearts, and denies us our ability to see ourselves and one another as we truly are.

But Jesus hears us as we keep going on and on about who is the greatest.  He calls us over, invites us to have a good talk. It doesn’t have to be this way, Jesus tells us. Follow me to freedom.

Choose to be last instead of first, Jesus says — if you have the choice. Choose to be servants instead of masters. Shake up the pile, scramble the list, align yourself with the disempowered, and welcome even children: those little ones who make messes, and ask inconvenient questions, and offer hugs, sometimes to strangers.

Jesus’ message is even more powerful because we know what he chose.  Jesus aligned himself with the poor, and with prostitutes, and with tax collectors, and with sinners of every kind.  Jesus chose to live a life that would demote him to the very bottom of the list, and he paid for it.

I invite you, as you are comfortable, to close your eyes for a moment….take some deep breaths… and imagine a person who has, to the best of their ability, known who you really are. Loved you, just as you are. Treasured you.  Remember the feeling that you have gotten from being known and love and treasured. Make room to receive that feeling, accept that feeling, as if they were right here with you.

Now imagine that this is how God feels about you.  This is how God knows, and loves, and treasures you. Despite all your mistakes and limitations, God is head-over-heels in love with you.

We are, each and everyone one of us, God’s beloved children. This is the most true thing we can know about ourselves, or anyone else.  In the end, all the ranking systems and stacking hierarchies crumble to nothing in the face of this enormous truth. All we need to do is breathe, and let that love in.

Please pray with me.