They began, of course, by following Jesus. Then, Jesus was killed; but only three days later he was back: walking to Emmaus, serving a breakfast of fish, appearing among the disciples, saying: “Peace be with you.”  It is not until Jesus ascends into heaven – traditionally 40 days after his resurrection, or this past Thursday in our current liturgical year – that his followers really need to answer the question. Who should we follow?

One straightforward answer to this question could be: the apostles. These men have travelled with Jesus, listened to him preach, watched him heal, and received special instructions from him. They have even been given authority over demons and the power to cure diseases (Luke 9:1). The apostles are the most obvious succession plan. However, one of the 12 apostles betrayed the movement. Judas, who carried out ministry alongside the others, assisted with Jesus’ arrest. There are still eleven apostles left: but to have eleven apostles lead the movement leaves open the wound of Judas’ betrayal. A leadership of eleven apostles also fails to symbolically restore the twelve tribes of Israel. Therefore, another apostle must be found.

Peter says to the crowd of believers, “…one of the men who have accompanied us during all this time that the Lord Jesus went in and out among us, beginning from the baptism of John until the day when he was taken up from us – one of these must become a witness with us to his resurrection.” So two men are proposed; the believers pray; and they cast lots, choosing Mattias.

Why does the decision happen this way? Peter is making it up on the fly. He doesn’t have any precedent to rely on, and no one has drawn up any bylaws. Peter comes up with his own process: a mixture of tradition, community discernment, prayer, and chance. I wonder how many women and children were there that day, in addition to the 120 men, and whether they got any say.  I wonder why the new apostle had to be a man, and why he had to be someone who was with Jesus from the beginning.  And I wonder why the believers gathered to discern and pray when the decision was finally made by casting lots – by luck. 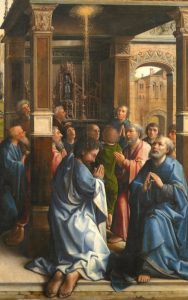 I invite you to take a look at how a 16th century Viennese artist imagined this meeting. What do you notice in this picture? Important to note: there were no Christian churches at that time, the early believers were not what we would today consider white, and there were almost certainly women and children present.  That’s the artist imagining that the men in the scripture story looked just like himself, and the church existed as it did in his time and place.

Peter’s method of choosing a leader for the believers to follow is profoundly imperfect: both in who gets to participate, and in how the decision is made. However, we could say the same about many leadership decisions.

How do Christians choose who to follow today? Recently the Theological Seminary at Baylor put out a list of the 12 most effective preachers in the English-speaking world. Again, notice: 12. These are the folks Baylor thought everyone should be listening to. Has anyone seen the list? There are some great preachers on that list. But there is only one woman in the bunch; she’s white, and no longer serving in a church. There are only three men of color. The rest of the list is composed of  — can you guess? White men. Eight out of twelve. There is not one single woman of color. There is no one who publicly identifies as anything other than straight and cisgender.  This list is problematic in all kinds of ways. Which begs the question: who designed the method of decision making, and who participated in it?

We no longer have one small group of believers making up the church.  Christian groups exist all over the world in incredible diversity.  As these Christians decide who to follow, each community has their own process, and their own wisdom.  But how well can the Spirit move in those places – so many places – where there are only men, or only white men, or only wealthy, white, straight, cisgender men participating in the decision-making process?

How can those of us who gather in the name of Jesus make sure that in our formal leadership and our informal allegiance we are following those who represent the vast diversity of God’s people?

The first is a document called “Reclaiming Jesus: A confession of faith in a time of crisis.”  A diverse group of church leaders came together this past Ash Wednesday and crafted a statement to try to articulate what loyalty to Jesus might look like for the church in this time. They proclaim their belief that each human being is made in God’s image, that we are one body, across boundaries of nation and color and gender and class. They proclaim their belief in the value of honesty. They proclaim their belief that leadership in the name of Jesus is servanthood, not domination. And they articulate what these beliefs lead them to reject: white supremacy, bigotry, misogyny, and xenophobia; the sin of putting the rich over the poor; the practice of persistent and deliberate lying; and any autocratic and authoritarian forms of leadership. In forming their beliefs, these Christians find their guide in love of God and love of neighbor. There are copies of their statement in the hallway, and I will put a link in the eWord, if you would like to consider whether this document might help clarify and embolden your own witness.

I also commend to you, as I have done before, The Poor People’s Campaign: A National Call for Moral Revival. This movement has its first major national action this Monday; you can join in locally tomorrow in Boston if you are able, or magnify their message through social media or word of mouth. This movement takes its leadership from the church but also beyond; focusing, as is so rarely the case, on the witness of the poor. Through the testimonies of the poor, this movement has been able to show, quote: “how the evils of systemic racism, poverty, ecological devastation, and the war economy and militarism are persistent, pervasive, and perpetuated by a distorted moral narrative that must be challenged…When confronted with the undeniable truth of unconscionable cruelty to our fellow human beings,” they say, “we must join the ranks of those who are determined not to rest until justice and equality are a reality for all.”

A poster from this campaign is on the cover of our bulletin. Just think of how different this picture of leadership is, than the other one we looked at. People together – across all kinds of diversities – out in the street.

Peter made a first attempt of guiding the Jesus movement to find human leadership.  Thankfully, the Holy Spirit got involved as well. We don’t know much about Matthias, or anything he accomplished after being elevated to the rank of apostle. However, two other folks in that generation, who were not nominated became profound witnesses to the good news of Jesus. There’s Paul, who wasn’t there in the beginning, and in fact persecuted early Christians before he became one.  He may have been the greatest evangelist of all time. There’s also Mary Magdalene, who wasn’t a man.  She evangelized an emperor and traveled widely to share her own first-person testimony of the resurrected Christ. Both Paul and Mary Magdalene were  effective preachers and church leaders, even though they didn’t make the list.

Who do you follow?  Who do you listen to, who influences you, whose example do you try to emulate?  Who’s on your personal list? Try writing it down later, and looking it over.

None of us has all the answers all by ourselves. None of us can get too far relying only on our own personal strength, our own personal wisdom. And if we are trying, ultimately, to follow Jesus, to follow God, no single person and no single kind of person can lead us there.  Instead, we need to follow people who will keep breaking open the boxes we try to put around God, and holiness, and justice. The Spirit calls us to widen the circle of those who influence us: draw the circle wide, draw it wider still.  Come, she invites us: find those who are honest and brave and faithful and really different from you. I have blessed them, so that they might bless you.

God, help us to follow those who through your blessing lead us closer to you. May we be like trees planted by streams of water, with roots that dig deep and wide, and trunks that grow strong, and leaves that do not wither. Amen.