Why bother with Jesus? 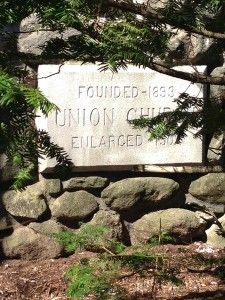 The name of Jesus makes trouble for Peter. Peter and John are healing and teaching in the name of Jesus in the days after the coming of the Holy Spirit, after the feast of Pentecost. They draw a crowd who are amazed by their work and their words (after all, they had healed a man who was more than 40!). But they also draw the attention of the temple authorities. They are, after all, preaching unorthodox ideas about the resurrection of the dead on the steps of the holy temple of Jerusalem; and they’re doing it in Jesus’ name. Peter and John are arrested, and brought before the rulers, and the elders, and the scribes.

The name of Jesus makes trouble for Peter. It makes trouble for Peter because Jesus had already made trouble for the temple authorities, the rulers,  the elders, and the scribes; for the whole Jewish community in Jerusalem. His movement of religious renewal had divided households and friendships. But more than that – it had threatened the status and safety of the Jewish community, their carefully brokered peace with their colonial rulers, the Romans. Jesus had made it even more dangerous to be Jewish in Jerusalem.

Jesus made trouble for everyone: disciples, fellow Jews, and the Roman Empire. And so when he was killed, many hoped that the trouble would stop. But Peter has another idea. Peter, the disciple who was always making foolish mistakes out of pure enthusiasm, finally finds a good outlet for his conviction and energy. Peter finally finds his purpose. Instead of a bumbling follower, he is suddenly a leader: the foremost leader of the fledgling movement that becomes the Christian Church.

Peter doesn’t care how much trouble he or anyone else gets into because of Jesus. He is still that same guy we meet in the gospels: all heart, full of love for his teacher. Peter can’t contain himself. He boldly declares to the leaders of his people that Jesus is the cornerstone of faith and the source of salvation. Luckily for Peter, the crowd is on his side; so he is released, to preach another day.

Why do we bother with Jesus? He makes so much trouble. He made trouble two thousand years ago. He makes trouble for us now.

Jesus makes trouble – because it’s hard for us to be certain about him. We only have a few lines in the history books and the sometimes conflicting accounts early Christian writings. Figuring out who Jesus really was, and how to translate his teachings and actions into our own time and culture is a puzzle. So Christians fight with each other and everyone else about his identity and purpose; and people do horrible things in his name. Jesus makes trouble.

Then there are Jesus’ teachings. It’s hard to get any straight answers from Jesus. He mostly taught with questions and stories that we struggle to to interpret. And when he came out with a clear command it’s usually something that’s almost impossible for us to do: love your enemies. Give away everything you have. I don’t know about you, but I’m still working myself up to both of those. A troublemaker, I tell you.

Jesus makes trouble, because he’s so hard to know; and because his teachings are so hard to understand and follow. And in this Easter season, we’re face to face with yet another problem with Jesus. In this season, we have to deal with the fallout of his resurrection. We have to grapple with this almost unbelievable idea that a man was also God; that his human death ended in divine resurrection; and that because of all of this, he can in some way “save” us.

Why do we bother with Jesus? Sometimes, it’s easier not too. We don’t always want to bother with Jesus and all of his baggage – which is probably why some people say that the acronym for our denomination, UCC, stands for “Unitarians Considering Christ” (instead of United Church of Christ). But I would argue we’re not the only ones who hold Jesus at a distance, even while gathering in his name. He’s just too much, he’s just too hard, he’s just too confusing and impossible to deal with.

And yet. There is something in what Peter says when he calls Jesus the “cornerstone.” Jesus is the foundation: the beginning and the center and the driving force of a tradition that has been inspiring people for over two thousand years, despite all our human efforts to pervert his meaning and his message. Throughout that time, countless people all over the world have grounded their life in Jesus: in the story of his life, in his teachings, in his death and resurrection, in his Spirit. They have discovered that this Jesus is the key to their salvation – by which I mean their liberation, their healing, their wholeness, their restoration.

Let me be clear: I think Peter was wrong, when he proclaimed that there is salvation in no one else. I believe that there are other true paths to God; Jesus himself knew God through the Jewish tradition. But I think Peter got something right, in those early days after the resurrection. Jesus can save; and for millions of people he has been the cornerstone: a firm foundation for a life of love and justice.

The image in this post shows some of the stones holding up our building, which was first built in 1893. This building, like the community of faith who has worshiped in it, has been through a lot: accidents, fires, years of scarcity and conflict, times of bounty and peace. Our ancestors gave us this place to gather. They also gave us this statement of covenant :

We, as children of God and disciples of Jesus Christ, do unite ourselves in this Christian Church. We desire to worship and serve God, to walk in the liberty of [God’s] truth, and to minister to our fellow men [and women]. Feeling our individual and united need of Divine aid, we desire through this communion of the visible church, to strengthen each other by mutual sympathy, forbearance, and helpfulness, and in all things looking to [God’s] grace which is ever ready to help us to do our part to establish the kingdom of God in the world.

I wonder, where do you stand with Jesus today? What do you make of this man? That is an open question; I do not assume that there is an easy answer or that we share the same answer. Let me suggest, though, whatever Jesus is or is not to you, that you not give up on him. I freely admit: having Jesus in our lives will give us trouble. And his life and teachings and spirit will give us trouble together as we gather in his name, if we are brave enough to let them. But this kind of trouble – however dangerous – can be life-giving. It may even, dare I say it, be life-saving. Thanks be to God.