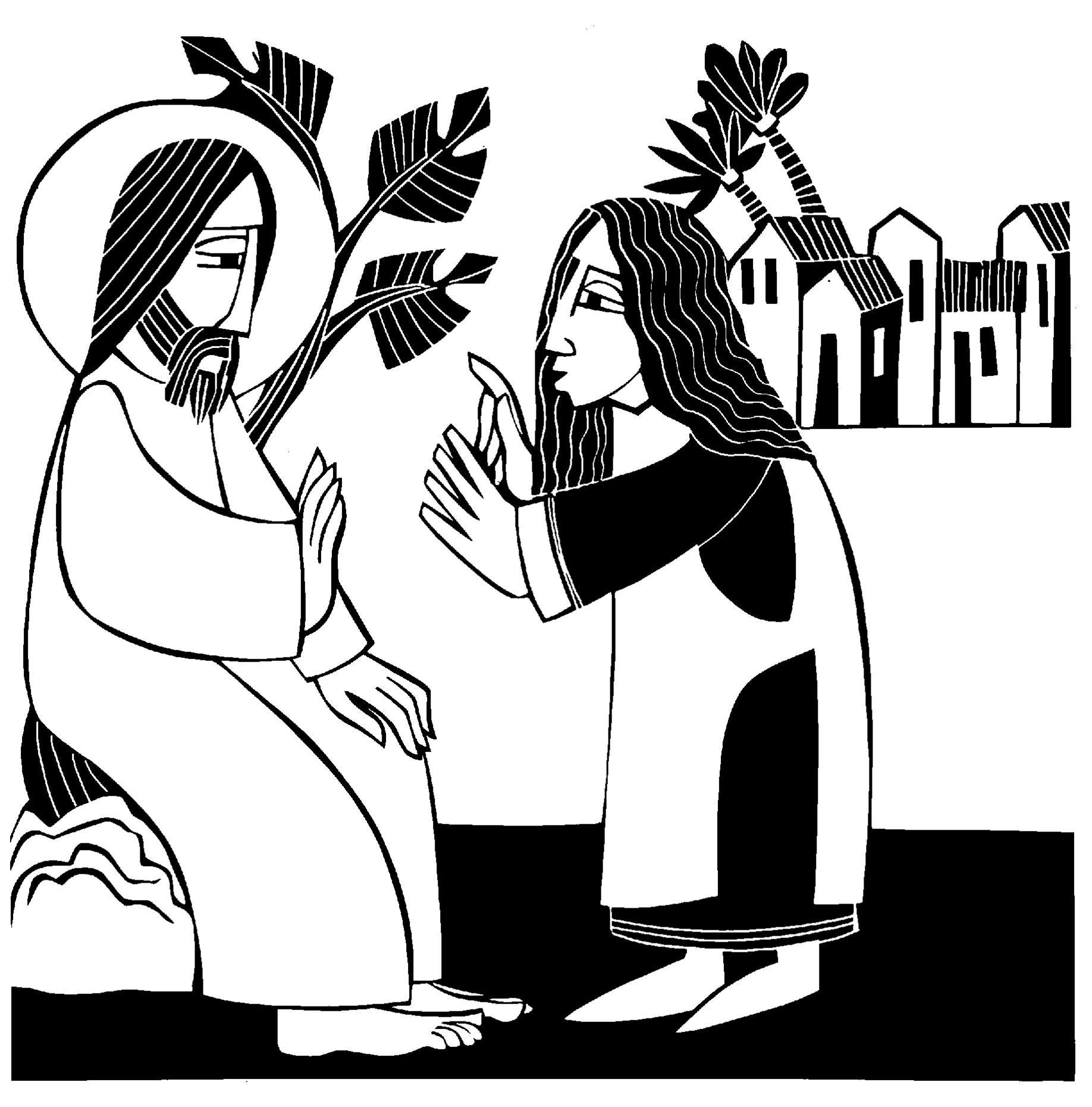 Our text begins today with Jesus teaching. He is teaching those who have gathered how to live a righteous life, a life that expresses the love of God.  There are so many different guidelines out there, and Jesus does not want anyone to be deceived.  This matters to him. So he calls the people in, he asks them to come closer.

This lesson that Jesus is teaching is not a new lesson. Throughout the gospels, Jesus tries to teach anyone who will listen that following  rules of empire, or even rules of faith, such as ritual handwashing before a meal: following these rules is not the most important thing. God deserves our ultimate loyalty, and following God requires flexibility. When we observe others eating differently, or praying differently, or somehow living differently than we do ourselves, we should not treat them poorly, or separate ourselves from them. We should not even assume that we hold moral superiority. Rather, we should treat them with kindness, and wait to observe what their actions reveal about their hearts.

Jesus offers this teaching, and then he moves on. He travels to the district of Tyre and Sidon. As he arrives in this new place, a woman comes out of the crowd and demands Jesus’ attention. She shouts “Have mercy on me, Lord, Son of David; my daughter is tormented by a demon.”

This is, perhaps, not the most polite way to ask for help.  This woman’s words express deference to Jesus, but she is loud, forceful, and direct. Not only that – but just by looking at her, you can tell that she’s not an Israelite. She’s a Canaanite. At first, Jesus ignores this woman. Desperate for help for her daughter, however, she continues her efforts. She badgers the disciples who surround Jesus with further requests. Irritated and uncomfortable, they ask Jesus to intervene. “Send her away, for she keeps shouting after us.”

Finally, Jesus turns towards the woman and speaks to her. He says: “I was sent only to the lost sheep of the house of Israel.”  Perhaps he says these words with compassion. But his message is still clear: look elsewhere.  We don’t serve your kind at this establishment.

Nevertheless, this woman persists. She will not give up. She kneels before Jesus, begging: “Lord, help me.” And then, what comes out of Jesus’ mouth? He says, “It is not fair to take the children’s food and throw it to the dogs.”

I have to admit, this passage is always a little painful for me to read. Even you, Jesus?  Even you – who teach us the story of the Good Samaritan?  Even you – who step in front of a woman about to be stoned? Even you – who eat with sinners and tax collectors?  Even you deny care to someone because of her background; and, when pressed, dismiss her as a dog. Have you not taught us that love and mercy are more important than culture, health, wealth, propriety, or religion? Have you not taught us that it is what comes out of our mouths that  will show others what is in our hearts?

I don’t know why Jesus fails himself and his God in this story. Maybe he didn’t spend quite enough time up on the mountain, praying, in the previous chapter.  Maybe he is still tired and overwhelmed by all demands of his calling. Whatever the reason, in this moment we see the fully human, totally unfiltered part of Jesus. We see that his heart has been harmed by taking in the biases in his upbringing, in his culture.  So, in an unguarded moment, that heart unleashes slander that defiles him.

Thankfully, in that awful moment, Jesus has a worthy teacher.  So many other people, repulsed by Jesus himself, would have slunk away into the crowd. But this woman – this Canaanite woman! She has been ignored. She has been rebuffed. She has been denied. She has even been insulted. Still, she looks Jesus in the eye and says, “Yes, Lord, even the dogs eat the crumbs that fall from their masters’ table.”

There has been a lot to be angry about this week. Anyone been angry? Frustrated? Nauseous? Despairing? Afraid? Mostly, I’ve been angry.

I’m not only angry with our elected leaders. I’m angry with our country as a whole. I am angry that it takes the KKK literally taking over our streets and parks, committing domestic terrorism and vandalizing a holocaust memorial to alert so many people to the fact that racism, bigotry, and anti-Semitism are still a powerful force in our country and in our state. These sins are not the exclusive habit of the few, but the practice of the whole. These problems are not only visible in the extreme event of domestic terrorism; they are woven in to the fabric of our lives together. They are reflected in all of our institutions, and laws, and practices.

Ultimately, I am angry with myself. I am a white American Christian pastor. My ancestors and I, mostly through our passivity, have helped to maintain the legacy of hate that we have been born into. My ancestors and I have reaped countless advantages from that hate without reparation or even full repentance. And the church to which I have given my heart, and within which I have found my calling, has played a major role in dehumanizing native peoples, demonizing Jewish peoples, and defending the enslavement of African peoples. The responsibility lies especially with people like me to stop tolerating lies, and to stop tolerating silence. The responsibility lies especially with people like me to tell the truth, and bring about an end, at last, to white supremacy. White supremacy in America is a white Christian problem.

So I decided to march yesterday. Sometimes anger can do good things. And, beloved, I have to say, it was beautiful. There were so many of us.  We filled up miles of road.  There were teachers, and nurses, and clergy people out in droves. There were lots of old hippies and – don’t worry about the young people – there were boatloads of millennials. Some people made funny signs, and other people wore funny clothes.  Lots of folks showed up with water and food and first aid kits, just in case. My water bottle was filled back up after hours of walking, and someone handed me a whole sleeve of ritz crackers.

All along the way, people leaned out of their apartments, cheering us on. Cleaning crews and nurses working shifts waved and clapped from doorways and windows.  People parked on the sidewalk with signs and strollers to show their children: this is who we are at our best. This is who we want to be. I especially loved the big brass band, with instruments painted in many colors, that showed up and kept us cheerful as we waited in the sun sweating because there were just so many counter-protestors on Boston Common, that no more would fit inside.

Those of us who are white have been taught to hate; and to ignore and enjoy the disparities that come from hate. It is what we were born into. It has been all around us, all our lives.

But if Jesus can make mistakes, maybe we can finally admit that we do, too. Maybe we will find the courage to listen to those who are different than us, who are despised by our culture, and yet dare to speak up anyway. Maybe we will find the courage to acknowledge and share with one another the truth about white supremacy: the whole truth, and nothing but the truth.  It will be painful, and uncomfortable.  But friends, our God is a God of unbounded grace and forgiveness. Won’t it feel good, to be released from this sin, to be liberated from these dangerous fantasies, and to wake up together into a new world of love, and justice, and peace?

God in Unexpected Places: On the Sea 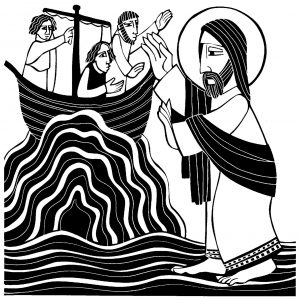 A lot is happening for Jesus.

For one thing, Jesus is getting famous. Word has gotten around about this charismatic rabbi reformer, about his preaching prowess and his healing skills. Every new town he arrives in, the crowds keep getting bigger. There are those who need healing.  There are spiritual pilgrims.  There are thrill seekers, and celebrity sighters, and folks who just want a little entertainment.

Jesus is getting famous. But some other things are not going so well for Jesus. Recently he travelled back home to Nazareth. Maybe he was hoping for some comfort, or some rest, or some affirmation. Instead, he is questioned and mocked. Those who knew him when are offended by who he has become.

Jesus moves on from Nazareth, but things do not improve. Soon he finds out that Herod, the local arm of Roman rule, has executed his mentor, John the Baptist.  This is a big loss for Jesus. And even bigger, because at least one of the reasons that John is killed is because Jesus has been  making trouble for the colonial government.

Jesus has a growing list of personal problems, and thanks to his newfound popularity, he is facing a whole lot of practical problems as well.  Crowds are great, but Jesus and his disciples are still trying to figure out what to do with everyone. How many people can Jesus heal in one day? Where can Jesus preach so that this many people can hear him? What about food for all these pilgrims? What do we do with so many people?

A lot is happening for Jesus: personally, professionally. He’s wiser than most of us, so he knows that he needs a break. His first attempt is to get into a boat, and go to a deserted place. Unfortunately, the crowd catches on. By the time his boat is approaching the shore, the crowds have tracked him down on foot.  Jesus has compassion on them. They are so desperate. He cures those who are sick.  Then he feeds everyone, making a meal for thousands out of five loaves, and two fish.

Then, finally,  Jesus says, “enough.” He compels his disciples to get into a boat and leave him. He dismisses the crowd. And he goes up the mountain by himself to pray. END_OF_DOCUMENT_TOKEN_TO_BE_REPLACED