Broken and Open by Pat Fleming 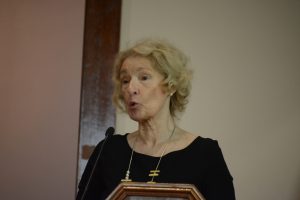 ittle did I know, the day Jane was born, that this tiny little girl would forever change me and challenge who I was day after day. She still challenges me even now. But on the day she was born, she demolished my girlish fantasies of who I would be as a mother and deliver dreams to our lives we didn’t know we had.

When she was born, Jane had no reflexes at all, including sucking. When the doctors sent us home, saying she was fine, she still could not suck. They told me I must get 3 ounces of formula into her every 4 hours whether she wanted it or not. If she fell asleep I was to wake her up by flicking the bottom of her feet. For many weeks it would take me at least 10 hours day to do this and sometimes 20– flicking the bottom of her feet – working her mouth- to get this formula she did not seem to want, into her. I would cry. I would weep. “I cannot do this,” I wailed. Or I would pray, “Help me help me! I promise I’ll be good.”

Sometime during those weeping weeks and childish praying—-something within me said, “Stop it. Get the job done!” And I did. I did it silently, quietly. I learned to listen to Jane. I watched her carefully and kept a diary – how long did she sleep, how long it took to feed her, what did she pay attention when awake. I let the doctors tell me she was fine. I stopped arguing with them and they stopped telling my husband–Jane’s father—I was neurotic. We were an Air Force family. My husband was a pilot and gone most of the time. He and I acted like everything was ok—though I knew my child was different from others. I kept working, reading and watching. Was Jane meeting the normal developmental benchmarks? No, she wasn’t. So I studied other children and asked myself, “How is she the same and how is she different?” I was developing the Benedictine practice of work as prayer.

Jane did develop, a little slower than other babies, but she was growing faster than I was. I was wound too tightly to grow feely. I was still concerned with being nice and polite, always having a smile on my face, not getting too emotional and never challenging anything or anyone. When Jane was three, we had another baby girl. Shortly thereafter, Alan was assigned to a Special Ops unit in SE Asia. He left when Jane was barely 4 and Ann not yet a year old. And then he was killed in action, in Laos, when Nixon said we were not in Laos. Alan was killed on his first flight in-country.

At my husband’s funeral, with full military honors, a 21-gun salute, honor guard and planes flying in formation overhead, I fearfully wondered to myself, “What am I going to do?” And once again something inside me said, “You are going to give your daughters the life you and Alan promised you would give them. Get to work.” And I did. In the 4 years since Jane had been born, I had quietly and carefully developed my intuition. I began to let myself feel. I learned that I was a small, suppressed and broken person who simply was not up to the job life had given me. But I took it on anyway. I went back to college. I got a BA, an MA and PhD. I went to therapy and took apart the emotional box I was in.

I was finally growing, first into the mother Jane needed, the kind who didn’t tolerate doctors or teachers who focused on what she couldn’t do. I looked for warriors. I interviewed doctors, teachers, speech therapists, physical therapists, orthodontists, nannies, neighbors. Even my own friends were scrutinized. I researched towns, communities, neighborhoods where Jane would not only be safe but also supported and included. I, like all parents, wanted people who were committed to who my daughter could become. I could see this was also going to cost a lot of money so I better get a good job. And I did. The University of New Hampshire offered me a faculty position and that’s how we got to the east coast.

The broken woman I had been, was becoming more open, less encumbered by the restraints and limits I had learned in the past. I was opened past many of the attitudes of the day. Did you know that Reagan signed a law in 1980 that made it illegal to neglect a compromised baby? But until the 1980’s it was legal to let a baby die!

Jane kept growing differently than others. She didn’t speak until she was almost 6 years old. Two weeks later, we discovered she had taught herself to read. She was also becoming very interested in food. She was a collector of it. It was an adventure cleaning her room: “What snack would be in the sock drawer? How old was the pizza in the underwear drawer? Where did she get the jelly beans in her boots?” She made it through the many hazards of grade school and high school and into her adult life still a mystery to all of us around her

Jane was 38 years old when she was finally diagnosed with Prader-Willi Syndrome. Prader-Willi is a non-inherited genetic error which displays hundreds of physical and neurological characteristics. But the single most challenging and disruptive symptom to daily life is the ever-present desire for more food. Jane’s body, every neurological mechanism, every cell, tells her every moment of her life that she must have more food – much like a starving person. Their early deaths are often the result of this never-ending demand for food from a body that will gain weight on 800 to 900 calories a day (which is comparable to the 800 calories diet of prisoners in Nazi concentration camps during WWII).

There is no cure for Prader-Willi, only a protocol, for managing the lethal choices the person is compelled to make. The protocol is 100% supervision and 100% control of available food. Just to let you know, we do not maintain this protocol of complete supervision and control. By the time, Jane was diagnosed she was a very independent person and she was not about to let that be taken from her. Somehow, somewhere, she has learned to stop eating when her body is saying more but is always in a dangerous conflict with her body’s desires. Jane is one of the few people with PWS that has survived into her 50’s. (I should note that this community has an abundance of Prader-Willi People. You have two, Jane and Dennis. This is a great number for such a rare syndrome). Now we can find doctors who have at least heard of Prader-Willi but very few have met such a person.

As for me, I’m still growing and battling my way toward a life that is both broken and open. At times, I still fight with that superficial girl who is concerned with superficial things. Jane and I were once in a battle over something, I don’t remember what, when Jane said to me, “You are interested in looking good and I am the child that doesn’t look good.” She was right! It was true in that moment. I was angry that she didn’t look good and it might tarnish me. Since then I promise myself repeatedly and regularly to let go of such mundane, shallow concerns. And I still don’t like being the food sheriff.

I have also learned that our story is not unlike the story of this church-maybe a few more challenges or pitfalls. Maybe our story is on steroids – you know what I’m talking about. But I know it wasn’t always easy for this church to include people of all abilities. And yet, you found a way and it has broken you open in some wonderful ways. I thank you for this, for your openness, for your insistence on inviting everyone to this church. I am grateful Jane is here in your company.

In my experience, Broken and Open are like sisters who squabble in a shared room, brothers who compete at everything or parents, who feel the responsibility the and sorrow of bringing their children into this flawed world. Jane’s birth did not break me. Jane’s birth and life revealed that I was already broken. What I know now is that love can overcome any amount of brokenness. Maybe you too you have loved someone whose spirit insisted that you open yourself to something you didn’t think you could. Jane’s spirit insisted, still insists that I open myself to the mystery of her and of her life. Someplace in this journey Jane and I have been on, I have found a deep and abiding gratitude for our whole demanding glorious life. Today, the prayer I repeat over and over quietly is still simple – it is “Thank you.”