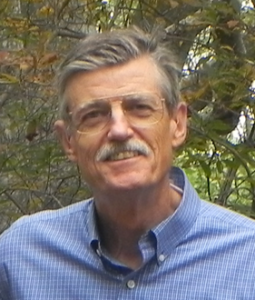 As many of you know, I was in my early 30’s when I became a Christian. My life was in crisis; my first marriage was coming apart and I was not happy in my work. In hopes of strengthening our marriage, my first wife and I began attending the local UCC church and receiving counseling from the pastor.

Up to that point, I had been, at best, an agnostic. I found there were parts of Christianity like Communion that were particularly mystifying, even off-putting.

Somewhat reluctantly, I agreed to go on a church retreat. The first day, I became more aware of the distress I felt about of our failing marriage. In my dream that night, Jesus was carrying my broken body in his arms, walking through muck up to his knees. Yet, I felt strangely safe and close to him. The next morning understanding for the first time, I took communion, tears flowing in gratitude for God’s love.

Since that conversion, I have had a growing sense of the Holy Spirit’s presence. But most of the time, it is only in retrospect I have realized her presence. For example:

• I believe it was the Spirit who inspired me to announce one night in a small support group that I was going to theological school. Believe me, I was as surprised as anybody when I realized what I had just said.
• I believe it was the Spirit who led me to become a student pastor at this church, to be inspired by Forster Freemen and, most importantly from my standpoint, to meet, eventually fall in love with and be married to the love of my life, Polly. That was when I experienced God’s resurrecting power.
• More recently, it is the Spirit who called and continues to empower me as a volunteer for Communities for Restorative Justice.
• Likewise, I realize now it was at the Spirit’s urging that I first said yes to becoming Treasurer of this church and later to walk into Hannah’s office with the insane idea that I would like to lead our stewardship efforts.

I continue to feel the Spirit’s presence inspiring me. That feeling is not always there, but it is very reassuring when I realize her presence. I am grateful to God and this congregation for the way I have been nurtured, empowered and, in the tough times, held in love.