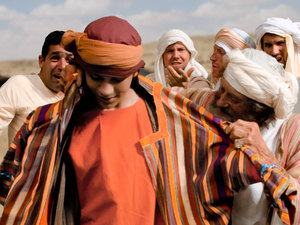 Joseph has it all. He’s part of a big family, with plenty of siblings to play with: eleven brothers and one sometimes ignored sister.  Joseph’s family is prosperous, he has plenty to eat, and plenty of everything else he needs. Joseph is also rich in love. He’s precious to his mother, Rachel, and he’s his father Jacob’s favorite child. As a sign of his favor, Jacob gives Joseph a beautiful coat, a special robe.

How do Joseph’s siblings feel, when they notice how Jacob favors him, and when they see his special robe?  Has anyone here ever been jealous of your siblings, or your friends? What were you jealous of?

Jacob’s siblings are jealous. They are jealous, because for all they have, they can see that Joseph is getting just a little bit more: a little more love, a little more favor, a little finer clothing. Now you could say that Joseph is innocent in all this. It’s not his fault that he’s been given so much. But eventually, Joseph does do something to make the situation worse.

You see, Joseph has these dreams. Vivid dreams. Dreams of sheaves of grain. Dreams of a sun, and moon, and stars in the sky. And all his dreams mean one thing: that his whole family is bowing down to him.  Now, we can’t help what we dream. But we can decide what we’re going to say about it. And Joseph seems to delight in telling his family about his dreams. One day, he tells them, you will be bowing down to me.

No one likes to hear about Joseph’s dreams. Not even Jacob.  And Joseph’s brothers are so angry, they decide to throw him into a pit, and then sell him to some travelers who are passing by.

The story doesn’t end there. Many years later, there is a terrible drought, and Joseph’s family does not have enough to eat. So some of Joseph’s brothers travel to a place where they have heard there is still grain. Where do they go? Down to Egypt.

But in the end, Joseph relents. He tells his brothers who he is. He tells them not to worry about the things they did to him before. He gives his family the grain they need. And then, he tells them that the whole family can come and live in Egypt with him. They’ll have plenty to eat, as the drought continues. When the family arrives, Joseph kisses his brothers, and weeps on them, and welcomes them.

Something changes in Joseph during this story. At the beginning, he seems to really treasure his gifts, and how special they make him feel. He looks forward to getting even more, and being more powerful than anyone else in his family.  Joseph makes sure that everyone knows just how extraordinary he is. At the end of the story, Joseph sees all that he has, and he decides to share it. He realizes that taking care of the people he loves, and being close to them, is more important than anything else.

Sometimes we have a lot of something, whether it’s love, favor, money, special gadgets, social status, a special striped robe. When we have a lot of something, we have an important choice to make. We can try to make ourselves safe and special, by keeping what we have all to ourselves, and protecting ourselves from other people who might want or need it. Or, we can decide to be close to other people, sharing what we have, seeing what all that bounty can do in community.

Deciding whether to hoard, or whether to share – that’s a choice we have to make it over and over and over again. It can be really hard sometimes, to decide to share. Here’s the good news. No matter who we are, what we own, what we keep, or what we share, we always have a lot of one thing: the love of God. We are all God’s children, and God has so much love, and favor, that she gives all of us more than we could possibly need. Imagine that each person in this room, and everyone we ever meet, is travelling through life with the most fabulous coat imaginable, because we are a beloved child of God.

Being rich in love, opening our hearts to that gift, can make it easier to share everything else.  And the love itself begs to be shared: to flow through us, and connect us to one another.