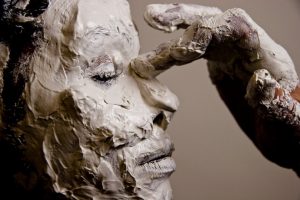 In the book of Genesis there are two creation stories. In the first story, God cries out into the chaos and Creation responds: light divides from dark, land from the waters, sky from earth, day from night.A beautifully constructed order emerges over six days. On the seventh day, God rests.

It is a beautiful story. There is another story, too.The second story of creation in Genesis has something entirely different to tell us.

When you think of the second story of creation in the book of Genesis, you may think of Michelangelo’s beautifully muscled, bearded God, creating a beautifully muscled, graceful Adam with only a gesture. Or you may think of the Tree of life, the snake, the forbidden fruit, and the end of Eden. But that’s not the part of the story that I’m interested in today. I invite you to notice something different about this creation story.

This story begins with dust. There is nothing on the earth but dust, dirt, earth. Earth and water. And the first thing God does is form that earth into a human form, and fill that human form with breath, with life.

There is so much water flowing around that dust, that dirt, that earth, that I wonder if the forming of that first human body may have looked a bit like a potter working with clay. If you’ve ever worked with clay before, imagine that feeling of clay on your hands, on everything you touch: maybe God’s hands were like that.

God formed a human out of wet earth. It must have made a mess.

But that didn’t seem like enough, somehow, something felt unfinished. So God planted a garden in Eden, in the east. God planted every tree that was beautiful, and bore good fruit. And now the human had a home, and the human had a purpose:a garden to tend and to till.

But that didn’t feel like enough somehow,something still seemed unfinished. God said: It is not good that the human should be alone; I will make this human a helper as a partner.

However long it took, the human enjoyed the process, watching God form these magnificent creatures. The human delighted in giving the animals names. Naming has been a human gift from the beginning. But the human did not find among these animals any that could truly be a partner.

So God tried again. God caused the human to sleep deeply, and removed a rib from the human’s body, and closed the body. And with the rib, God made another human: Bone of bone, flesh of flesh, an equal helper: a true partner.

In most of the artwork I can find, the second human is lifted whole out of the side of the first, but that’s not what the text says. This making must have been messy, too: Blood and bone, instead of dirt and clay.

Surely God must have a special tender care then for each physical part of this creation. God must care very much what happens to the special holy gift of each of our bodies. We are a precious gift, each one of us — handmade by the best.

God must be intuitive and experimental, too:to understand that we get lonely, and to know, once it had been tried, that a rhinoceros was not enough. To work so hard, and try so many times, before finally making a helper who is a true partner.

This God, who loves our bodies, seems to be figuring it all out right alongside us: trying to meet creation’s needs again and again, getting it wrong sometimes, and getting dirty in the process.

The God in the Second creation story does not have it all figured out. This God does not direct things from afar through voice or strength of will or superior muscle tone.

This God is hands on, and works with clay.

God, when I am helpless or hopeless, teach me that I am precious. Work with the messy and holy material in and around me for as long as it takes until we can make things better. Find me true partners so I will not be alone. Amen.