Is Anything Too Wonderful for the Lord? 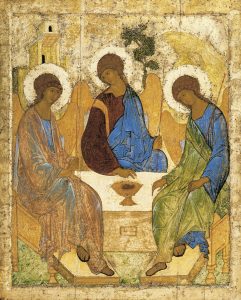 Abraham has so many reasons not to get up.

When we meet father Abraham in the scriptures today, he is resting at home under his favorite tree.  He has reached the age of 99, and getting up and down may not be easy for him anymore. It is the heat of mid-day in the ancient near east, when no sensible person is active.  And Abraham is also recovering from a recent encounter with God that included undergoing a circumcision, and hearing the shocking news that he will yet have a son by his wife Sarah, herself 90 years of age.

Abraham has so many reasons not to get up. He really needs a rest! But when he looks up and sees three strangers, Abraham not only gets up: he runs. He runs towards these three visitors, and bows before them, and begs for the opportunity to serve them, saying: “My Lord, if I find favor with you, do not pass by your servant.”

Abraham promises the strangers water for washing, and a little bread to eat, and the opportunity to rest under the very tree he had used for shelter himself. And then Abraham orders up a feast that far surpasses what he has promised. It includes freshly baked cakes made from choice flour by the skill of Sarah’s hand; a tender calf, slaughtered and prepared by his servant; and curds and milk to drink.  All of these things Abraham places before the travelers, who now sit in comfort in Abraham’s favorite spot.

Why is this story in our scriptures? Theories abound.

This story has become famous in recent centuries because many interpret it as a story about the Christian concept of the Trinity. Just think — here, in the Hebrew Scriptures, our one Lord visits Abraham in the guise of three persons. Textual analysis shows that Abraham even goes back and forth between the singular and the plural when addressing them.

But unfortunately for Christian theology nerds everywhere, the likelihood that the authors of this story were contemplating the trinitarian nature of God is slim to none. That theology came much, much later. Also, in Genesis this kind of visitation is not so unusual. God comes to visit humans in all kinds of interesting ways, from a burning bush to a midnight wrestling partner. Angels in particular were strangely common: so much so that three of them showing up to see someone like Abraham seems fairly unsurprising.

One might also wonder if this story is important because God is testing Abraham and Sarah.  Perhaps by showing up in disguise, God wants to discover the true nature of their character and determine whether they are worthy of receiving a child or being part of a covenant.  This idea also falls short, however, when we remember that a child has already been promised to them, a chapter before, as part of the covenant between them. So the words of the visitor at the end of the passage, “I will surely return to you, and your wife Sarah shall have a son” – these words serve as a confirmation of God’s intention, not a new declaration.

Maybe there is another possibility. The picture on the front of your bulletin is a famous icon by Andrei Rublev. In the background, if you look closely, you can see Abraham’s house, and the tree that provides shade for him and his visitors. Moving forward, we see the three visitors, graceful, peaceful, surrounding a table which holds the food they have been offered. Delightfully, at the very front, there is a spot at the table open for us, so that the viewer may join in the meal as well.  You may have heard this lovely icon called the Trinity, or the Old Testament Trinity.  It also has another name: Abraham and Sarah’s hospitality.

Hospitality is an important theme throughout our bible but it is a particular focus of this portion of Genesis. If we read on, we find that when the three strangers leave Abraham and Sarah, they travel towards Sodom. Sodom and Gomorrah are slated for destruction due to the great sin found there. What kind of sin, the bible does not tell us specifically. Unfortunately, plenty of people have filled in the blanks to their own satisfaction. But we have an opportunity to witness one failure of morals within the story itself.

Two of the travelers arrive in Sodom and are welcomed by Lot, Abraham’s brother. Lot offers them a feast, and a place to stay in his home. But the men of Sodom, both young and old, every single one, surround the house in anger and mistrust. “Where are the men who came to you tonight,” they demand. “Bring them out to us, so that we may know them.” Lot, however, does not trust the crowd. He refuses to offer up his guests.

The men of Sodom are enraged. They respond, “Stand back! This fellow Lot came here as an alien, and he would play the judge! Now we will deal worse with you than with them.” The mob almost manages to break down the door before the angels close it against them.

What can we learn from these visitors, who come first to oaks of Mamre, and then to Sodom? These two stories, back to back, drive home the point beyond the shadow of a doubt. Those who follow God are called to provide hospitality to strangers.  Those who offer them suspicion and violence instead are guilty of great sin.

Our scriptures are absolutely clear what kind of attitudes and actions we should have towards those who are different from us. Both the Hebrew and Greek scriptures tell us over and over agaon: Love your neighbor. Love your enemy. Welcome the stranger. Every single person deserves decent treatment – and indeed, extravagant hospitality.

This biblical teaching touches so many issues in our modern lives.  There are national and international issues, like refugee resettlement, and travel bans, and deportation. There are cultural issues, like white supremacy, and anti-Islam bias, and class discrimination.  There is the continuing tragedy of deaths like Philando Castile’s, and the failure of our justice system to recognize his death as a crime. Seeing the contrast between the values of our faith and the values of our nation, our culture, is jarring. It’s hard to know where to start, how to follow God’s teaching.

The best place to start is probably at home. Many of us have relationships in our own lives in which differences have led to estrangement, in which some extravagance on our part might help to bring down a barrier. All of us have a cultural inheritance of racism and bias, that we have a chance every day to choose to unlearn. Our churches, too, have work to do, many kinds of work, and on that front I bring good news this morning.

Yesterday it was my great privilege to attend the Massachusetts Conference of the United Church of Christ Annual Meeting. Except, that’s not what it was this year. This year, the Massachusetts and Connecticut and Rhode Island conferences of the United Church of Christ met together. And not only did they all meet on the same weekend, in the same place, they all voted, separately, to begin the process of forming a new conference that would unite them all.

Now I imagine there are few of you who have been staying up late wondering whether this would happen or what the ramifications would be. Probably, this is the first you’ve heard of it, and the last time it’ll concern you at all. But let me tell you, from where I stand, this is a development of astonishing beauty. Hundreds of good New England Congregational church people, born and bred in the idea of righteous autonomy, utterly proud of and devoted to their congregational and state identities, decided that the power of what we could do together was more important than our independence. We decided interdependence was better than independence, when considering the crucial nature of our common mission. We began to erase the artificial boundaries that have kept us apart from one another and have kept us from making God’s love and justice real in New England with the full impact of our combined resources.

From violence to peace, from deportation to radical welcome, from isolation to connection. There is so much work to be done. We have so far to go. But, as Abraham’s visitor proclaims, “Is anything too wonderful for the Lord?”

After all, Abraham and Sarah were not the first ones to show extravagant hospitality. God herself is our first example.  She welcomes us in all our strangeness and sin. She opens a seat up for us at Her table.  And She also comes to us as a guest.  Each stranger we encounter is made in the image of God. By honoring them, we honor God. By welcoming them, we learn to know God more fully. Thanks be to God.