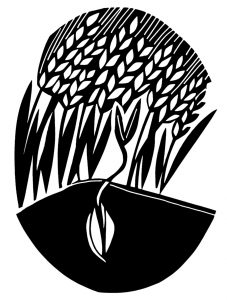 Everyone is talking about Jesus.  They’re talking about Jesus, because of what happened with Lazarus. It is not so long before our gospel passage for today that Jesus learns that his friend has died. He goes to the tomb and asks for the stone to be taken away.  He cries, “Lazarus, come out!” And Lazarus comes up out of the tomb.

We can imagine that a story like this would get around. A teacher named Jesus raised someone from the dead? Everyone is talking, rumors are spreading, and more and more people are coming to see the one who defied death.

Everyone is talking about Jesus, excited, worried, and Jesus knows it. For a while, he hides out, avoiding the conflict. But eventually he decides: it’s time. Jesus travels into Jerusalem for the great feast of Passover -we’ll remember this story next week. There are lots of people in Jerusalem, and when they see Jesus, they tear palm branches from the trees and wave them in the air, shouting, “Hosanna!”

Amidst this great crowd, those who saw Lazarus rise continue to testify. This story about Jesus continues to spread. So, as our text for today begins, Greeks, Jews from the greater diaspora, folks who just arrived in the region, come to see for themselves the one who defied death.  They tell Philip, with great politeness: “Sir, we wish to see Jesus.”

The scene is set for Jesus to tell us more. Will he explain how he did it, how he lifted Lazarus from the dead? Will Jesus promise to do away with death forever?  No such luck. Jesus is always happy to challenge people’s expectations. He says: “Very truly, I tell you, unless a grain of wheat falls into the earth and dies, it remains just a single grain; but if it dies, it bears much fruit. Those who love their life lose it, and those who hate their life in this world will keep it for eternal life.”

Instead of telling us how to conquer death, Jesus starts talking about what we might call the benefits of death: his death, our death, the death of our lives as we know them. Jesus talks about death, and service, and glory, and is answered from the heavens, with a voice that sounds like thunder, or angels. And then Jesus concludes, “Now is the judgement of this world; now the ruler of this world will be driven out. And I, when I am lifted up from the earth, will draw all people to myself.”

So much for immortality. They way of Jesus, it seems, does not set itself against death. Following Jesus, we are led closer to death. In fact, the path of Jesus moves through death.  It is only on the other side of death that the story takes a positive turn: the grain bears much fruit; we discover eternal life; Jesus is lifted up from the earth; Jesus draws all people to himself.

What does it mean that Jesus speaks in this way about death? Is he recommending martyrdom as a path for all of us? Does he believe that suffering and death are glorious or productive? Should they be something that we seek?

Some Christians have understood the story of Jesus this way: glorifying, celebrating, and promoting the emulation of his suffering and death. With great love for all of you, and our many and varied kindred in Christ I must confess that I believe this kind of thinking is dangerous, especially for white people, especially for people with any form of privilege. Jesus didn’t want to die. His death was not beautiful. Jesus didn’t need to die to satisfy the will of God. Jesus doesn’t want us to suffer and die without cause. Rather, when Jesus speaks of death in this way he is attempting to dismantle the idol of immortality. He is working to disassemble our paralyzing fear and denial of death.

If we think death is the ultimate enemy, Jesus says, we have mistaken the whole story of God. Our bodies are made out of the dust of the earth, and to the dust of the earth we will return. Our spirits come from God, and we will be gathered back up into God. God did not make us to be immortal. There is a loveliness to the fragility of our existence, to the cycle of birth and death, to the sacred recycling of matter and spirit. What’s more, there is a terrible danger in our obsession with preserving ourselves, and extending our power, beyond natural human limits.

I wonder if our fear of death and our desire for immortality are how we got into this mess in the first place. Studies show that in the absence of religion to help us sort out our feelings about death, and deal with anxiety, people turn to guns. Guns make some people feel safe, and more guns means more safety. Safety: primarily for white men, and their families. Safety: primary from people who these white men view as different from themselves.

Tragically, guns do not make anyone safer. They are designed to kill. Ironically, they are particularly dangerous for the people who own them. Guns are rarely used to protect their owners from anyone who might be labeled an “outsider.” Instead, statistically they are much more likely to assist their owners in killing themselves or in killing their spouses; or to cause the injury and death of their children.

Enhancing our ability to kill does not prevent us from dying. Ultimately, nothing can do that. We’ve got to look elsewhere, for a way to tolerate the human condition.

When Jesus walks into Jerusalem, he knows that he is walking into his death. That’s not why he goes. He doesn’t want to die. But Jesus has work to do; truth to tell. And he knows that doing his work, and telling his truth, and living his life, will most likely mean losing it.

Most of us here today may never face a moment when being who we really are will mean losing our lives at the hands of others. This is a mark of our privilege: racial privilege, financial privilege.  But the story of Jesus’s crucifixion, like the story of so many innocent, untimely, violent, and unnecessary deaths, is an invitation to allow our hard shells to be broken.  Only then, when the seed of our lives has opened up to the ground of all being, can we begin to claim the only kind of immortality that is possible for us. Our lives, our bodies, our spirits, cannot continue forever on their own. They can only continue as a part of the great earth, the wide human community, the eternal spirit of God.

Some of our kindred have no choice but to fight for their own survival.  If the struggle for acceptance, safety, and dignity seems less urgent to us, we may need a little more breaking open.  But the opening of our hearts, the death of the lives we have known, and even mortal death itself, is not what we need to be afraid of. Jesus says, “Very truly, I tell you, unless a grain of wheat falls into the earth and dies, it remains just a single grain; but if it dies, it bears much fruit.” And again, “I, when I am lifted up from the earth, will draw all people to myself.” In our living, and in our dying, we belong to God. Thanks be to God.