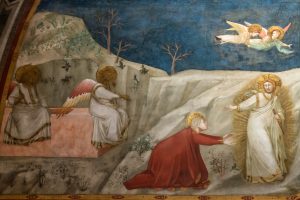 How did she come to believe?

We don’t know much about Mary Magdalene. You may have heard stories; most of them aren’t true. Mary Magdalene gets mixed up with all the other Marys in the New Testament, as well as several unnamed women. We don’t know much about Mary Magdalene, but we know a few very important things. She was a follower of Jesus. She suffered from seven demons, which Jesus cast out. She was there when Jesus died, and when the empty tomb was discovered. She was the first preachers of the resurrection and a central leader in the early church.

In this morning’s text, we learn something else: even for her, it was hard to believe.

Mary comes back to the tomb early on the first day of the week, while it is still dark. Her teacher has died, and she wants to be with him. She goes to sit by his grave, but when she arrives, she sees that the stone has been removed from the tomb. Mary does not rejoice. She does not guess what has happened. She cannot even bring herself to investigate. Mary runs to Simon Peter and the disciple whom Jesus loved, and says, “They have taken the Lord out of the tomb, and we do not know where they have laid him.”

Mary does not rejoice. She does not even ask the other disciples what they have seen, or what they believe. She stays by the tomb, and weeps. Maybe it’s the first time that she has been able to cry. Maybe she has been encased in grief ever since she saw her friend on the cross. But now the tomb is open, and so is she.

Finally, Mary looks into the tomb herself. She discovers two angels in white, sitting where Jesus’ body had been. The angels ask, “Woman, why are you weeping?”  But Mary does not rejoice at the sight of angels. She does not even express fear or wonder. She just says, “They have taken away my Lord, and I do not know where they have laid him.”

Then Mary turns, and sees a figure in the garden. It is Jesus, risen from the dead. He says, “Woman, why are you weeping? Whom are you looking for?”  But Mary does not rejoice. She does not even recognize him. Thinking he must be the gardener, she says: “Sir, if you have carried him away, tell me where you have laid him, and I will take him away.”

It’s not until Jesus says, “Mary!” that she finally wakes up. It’s not until Mary hears Jesus’ story from his own lips that she begins to believe. Only then does Mary leave the tomb behind, and go to tell the disciples, “I have seen the Lord.”

Some of you may have heard another remarkable story, the story of Matthew Sanford. Matthew was only 13 when his family was in a car accident that left his legs paralyzed. What kept him alive at first, Matthew says, is how much his family needed him to survive. But for years that survival was limited. Matthew decided that in order to cope, he had to separate himself from his past. One life was over: the life that included his childhood, and the use of his legs. Now, he had a new and very different life.

In his new life, Matthew was guided by doctors and therapists who undertook important repairs to his body. He went through operations and rehabilitations, necessary but extremely painful adjustments. He learned that his arms must serve as both arms and legs. He was encouraged to ignore his legs altogether.

Then, about ten years later, something changed. Searching for pain relief, Matthew started to practice yoga.  Through his yoga practice, he began to be aware of some sensation in the lower part of his body. It wasn’t that his spinal column had regenerated. His body could not go back. Still, he could feel … something.  It was as if, he said, he was making his way across a room in the dark. It wasn’t the same as travelling in the light. He couldn’t see clearly or directly. But he became more and more aware of the texture of the darkness.

Matthew has continued to practice yoga. And he has begun to teach. He teaches abled bodied people. He teaches those who need physical modifications. And most recently, he has begun teaching disabled army vets how to move and breathe with greater ease in the bodies they have now.

The message of Easter is hard to understand and to trust. It is often misrepresented. The good news of this morning does not erase the tragedy that came before it. The betrayal of the disciples who denied Jesus, the cowardice of the religious leaders who arrested him, the bloodthirstiness of the crowd that called for his crucifixion, the ultimate immorality of the state that executed him  – all of that cannot be undone. Mary and all of Jesus’ followers will always be marked by what they experienced. And Jesus – even Jesus, the great exception, risen from the dead – even Jesus is not the same as he was before. “Do not hold onto me,” he tells Mary. He has left regular human existence behind for something entirely different.

The good news of Easter is not that all past wrongs are erased, but rather that tragedy can occur in our hearts and in our bodies, and yet, through the power of God, we can still rise.

For Mary, it did not happen all at once. She had to go out and find her way while it was still dark.  She had to see the open tomb, talk with her friends, cry, speak with angels unaware.  Then, finally, she spoke with Jesus himself. He said, “Mary.” He spoke her name in that familiar, beloved voice.  And through his gentle presence, and his loving persistence, Mary came to believe that Jesus really was with her in a new way. In time, she would discover that losing him, and finding him again, had changed her so profoundly that she would dedicate the rest of her life to sharing that good news over and over and over again to whoever would listen.

What deaths are you grieving now? Our gospels tell us that death is not the end of the story. Instead, we are invited forward in the dimness of our grief, onwards towards awareness and, ultimately, surrender.  If we stop pushing, and start feeling; if we breathe in and out; then, perhaps – when we are ready –  we will recognize the voice of Jesus, calling our name, inviting us to believe in new life. Thanks be to God.