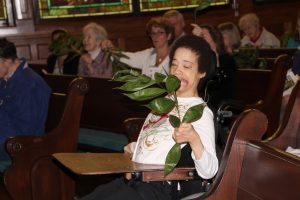 What kind of a strange parade was this?

On Palm Sunday, many of us who were raised in the church anticipate a festive event. We shout Hosanna, and we wave palms, and we sing “All Glory, Laud, and Honor.” We fold palms into crosses if we have the right kind, or we use our palms to fight one another. Some churches go even farther in their celebrations. A church I served as a student Pastor gets a mariachi band each year and marches through Manhattan with children taking turns riding on the back of a pony.  Who doesn’t love a parade? Maybe next year.

These festive celebrations are part of our tradition. But in marking that tradition, we may forget just how strange Jesus’ parade was.

Parades were a familiar event in the Roman Empire.  When a military commander led Roman forces to victory, that victory was celebrated with something called a “day of triumph.” The general became a kind of king for a day, wearing a crown of laurel and robes of purple embroidered with gold.  He rode in a great chariot led by strong horses on a long route leading into the heart of Rome.  Great crowds cheered him on and showed him honor  as he passed, followed by his army, marching in formation. When the whole procession finally made it into the city, the general went to the temple of Jupiter to offer sacrifices. There were feasts, and public games.  A day of triumph.

Jesus’ parade was… different.  He was not a military commander. He had 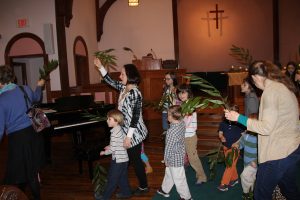 won no victory. And he chose not Rome, but the holy city of Jerusalem as his destination. As far as we know, Jesus didn’t have a special outfit.  He didn’t have a chariot, either, or even a horse; he rode on a donkey. Actually, in the gospel of Matthew, which we read this morning, it’s even worse than that – Jesus straddles both a donkey and its colt at the same time, in what must have been an extremely awkward procession. Jesus had no army marching in order behind him, but a ragtag bunch of fishermen and children and tax collectors and scarlet women and people with illnesses and disabilities.

Jesus’ parade can’t have been very grand. But the crowds go crazy anyway. Jesus’ reputation has been growing throughout his short ministry. The people who have come all the way to Jerusalem to mark the feast of Passover are thrilled that this celebrity Rabbi is joining them. So they show him honor, throwing branches and cloaks into the street to make a kind of red carpet. People go ahead of him, and come behind him, waving palms and shouting “Hosanna to the Son of David! Blessed is the one who comes in the name of the Lord!

Jesus is king for a day – king of the Jews. But not everyone is prepared to celebrate. Our gospel tells us, “When Jesus entered Jerusalem, the whole city was in turmoil, asking, “Who is this?””

In so much of what he does, Jesus challenges us. He teaches with stories that contradict our common sense.  He teaches with questions that disturb our equilibrium.  Only rarely does he come out and give an actual instruction, and then, the results are similarly jarring: Let the children come to me. Go, and sell everything you have.  Love your enemies, and bless those who curse you.

In the events of Holy Week, we see Jesus teaching again, using a different medium. This time, Jesus teaches through what you could call performance art, or street theater, or civil disobedience, or non-violent resistance. He brings his disruptive presence right into the heart of religious and political power and refuses to be anyone other than exactly who God has called him to be. 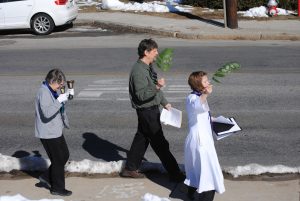 Palm Sunday is a day of triumph, in a sense. But many of those who shout with joy on this day turn to silence, or even condemnation, by the end of the week.  By then, Jesus has disappointed everyone. He has shown that he is too peaceful to lead a military movement; too unpredictable to bolster the religious establishment; too powerful to be ignored by the colonial overlords.  And so, by Friday, instead of public games, there is a public spectacle.   The crowd demands his crucifixion, and watches as it is carried out.

Holy week starts with one kind of triumph, and ends with a very different one on Easter morning. But none of it makes sense unless we pay attention what Jesus is teaching us, and walk with him through the middle passage. None of it has meaning unless we consider the resonance of the whole story in today’s events, and in our own lives.

Let’s notice, then, the strangeness of this parade, and all that comes afterwards.  Let’s journey into this week with Jesus, to learn from his final teaching.