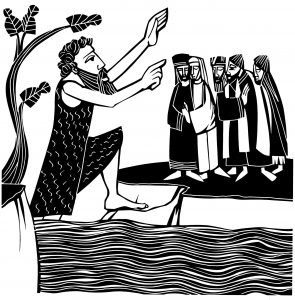 How does the story of Jesus begin?

Each of the four gospels begins the good news of Jesus Christ in a different way. The gospel of Luke begins with a long story of Jesus’ birth, full of angels and songs: more of that to come later this month. The gospel of Matthew begins with a genealogy connecting Jesus to powerful ancestors, drawing a line from the past to the present. The gospel of John begins with a poem about the eternal nature of Jesus: in the beginning was the Word.

Today we hear the very beginning of the gospel of Mark.  In Mark’s gospel, there is no mention of the manger, or the magi, or the angels, or the ancestors.  And there is no poetry. Instead, we hear this: “As it is written in the prophet Isaiah, ‘See, I am sending my messenger ahead of you, who will prepare your way; the voice of one crying out in the wilderness: ‘Prepare the way of the Lord.’’”

Mark begins with prophecy: the prophecy of Isaiah, and the prophecy of John the Baptist, who carries on the legacy of Isaiah in a new era. John, as you may know, was a curious figure. He wore camel’s hair.  He ate insects. But despite his odd personal habits, John drew people to him. Lots of people. People from all over the Judean countryside and from Jerusalem itself came out to hear him preach along the River Jordan. They listened to him, and their hearts were moved.  Many chose to confess their sins and be baptized into a new life.

Mark’s gospel begins with the prophet Isaiah, and it continues with the prophet John the Baptist. And then, John says, “the one who is more powerful than I is coming after me; I am not worthy to stoop down and untie the thong of his sandals. I have baptized you with water; but he will baptize you with the Holy Spirit.” The next prophet in the lineup is Jesus himself.

What is a prophet? Sometimes we speak of prophets as predicting the future, like fortune tellers. But in our religious tradition, prophets are not primarily focused on forecasting what is to come. Instead, they reveal the hidden reality of the present. Prophets have an uncommon ability to perceive the wisdom of God, the perspective of God, and to share that with others.  If we listen to what they have to say, we can also begin to perceive the world as God does.

We could use some prophets in this time and place.  Some folks to keep us grounded, and clear-headed about what is going on around us.  We live in troubling and tumultuous times! What are some of the things that are troubling you these days? What are you reading in the news, or experiencing in your daily life? (Members of the congregation named some concerns, including sexual harassment, failure to welcome refugees, wildfires).

We could use some prophets in this time and place. And I am glad to tell you: we have some.  Just this week, there was a national call for moral revival, the launch of a new Poor People’s Campaign.  Fifty years ago, The Rev. Dr. Martin Luther King, Jr. said, “there must be a radical redistribution of economic and political power.”  King was part of a movement that worked to make visible, and audible, the reality of discrimination, dehumanization, and poverty in a nation with more than enough to go around.  This movement was, King said, a multi-racial “nonviolent army of the poor, a freedom church of the poor.”

Honoring that history, and compelled by our current reality, a new movement is arising today. Led by the Rev. William Barber II, as well as the UCC’s Rev. Traci Blackmon and so many others, this new Poor People’s campaign is uniting people across the country to challenge the evils of systemic racism, poverty, the war economy, ecological devastation, and the nation’s distorted morality.

Last spring, I had the privilege of hearing the Rev. William Barber speak at the UCC’s General Synod gathering in Baltimore. It was an experience. I stood there having to remind myself to breathe in, and breathe out, as I listened to him speak.  My heart was jumping out of my chest, because everything in me was saying, “yes, this is it!”  He was able to articulate with stunning clarity what is going wrong in the world and what going right would be like.  Rev. Barber refuses to be partisan, or to seek anything less than the full justice of God. He believes that we can be a remnant to transform this nation; that we can bring about a season of moral resistance; that together, we can change the moral narrative of our country.  And as he was speaking, it seemed not only possible to me, but inevitable; because he and those who are working with him are calling out the good in us, the God in us.

In the United Church of Christ, as the Rev. Traci Blackmon, one of our national leaders, has said, we have a history of crying out, and of showing up. Being part of this movement is the next step. Our local Associate Conference Minister, the Rev. Wendy Vander Hart, has been attending local meetings for this new movement in Boston. This week, she issued an invitation to all of us to join in.  As the largest Protestant denomination in Massachusetts, we have power to use here, to strengthen a national effort that has been building for over a year now, preparing to mobilize in the months to come.

Now, I know what you’re going to say. Hannah – what are you asking us to do? There’s only two weeks until Christmas. No one’s got time to march on Washington right now.

Don’t worry. Today, all I am asking is this: honor the seasons of Advent and Christmas by listening to the prophets, both ancient and new. Take five minutes, or ten, to read about this movement. Watch a video of some of the leaders speak.  Let the words and ideas seep into your heart. Notice whether these words offer you some clarity, or some hope.  You can find out more at poorpeoplescampaign.org. There’s also a link on our Facebook page, and I will put one in the eWord.

How does the story of Jesus begin? How a story begins tells you so much about what it is really about.  The gospel of Mark begins with prophets: Isaiah, and John, and Jesus.

In this season, when we are exhausted or disgusted, we can find our way to the feet of the prophets, ancient and new.  We can lay down the burden of our sins, and drink in the words of God’s prophets like living water. Their words continue to prepare a way out of no way for us today. They make a clearing through wildernesses of confusion and despair.

The prophets tell us that every valley shall be lifted up, and every mountain and hill be made low.  The glory of the LORD shall be revealed, and all people shall see it together.  The grass withers, the flower fades, but the word of our God will stand forever.

There are prophets among us, and they lift up their voices with strength, heralding good tidings, saying to the cities, “Here is your God!”

Thanks be to God.