Shaped by Hope – In a Climate Crisis World 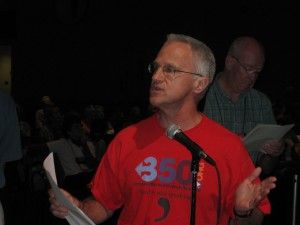 Excerpts from the sermon  “Shaped by Hope – In a Climate Crisis World” preached by the Rev. Dr. Jim Antal on March 15, 2015

We need to take to heart Jesus’ most common instruction: “Fear not!” When it comes to the climate crisis – following Jesus’ admonition – we need to fearlessly move forward:

To address the climate crisis, we need:

Some of you know that on July 1, 2013 the UCC became the first denomination to vote to divest from fossil fuel companies. This began when your Mass Conference Board voted to bring the resolution I had written to Synod. In doing so, we were on the front line of what is becoming a larger movement that now includes close to 1,000 universities, cities, philanthropic foundations and faith communities whose investments together represent more than fifty billion dollars.

And most importantly – now it’s time to test our faith. I urge you to allow a great hope to enter your heart as you receive Jesus’ most frequent admonition – “Fear Not!” Face this challenge, follow where God is calling you, and recognize that however impossible, however unlikely, however unreachable, nothing is too hard for God. Amen.