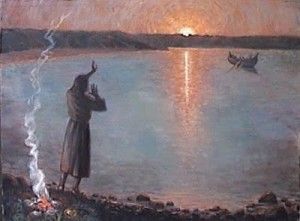 What do you do after a resurrection?

Simon Peter decides to go fishing, and several other disciples come along, too. All things considered, it’s not such a strange choice; many of them used to be fishermen, before they started following Jesus.

For all the fishing know-how in the boat that evening, though, things don’t go very well. The disciples fish all night, and catch nothing. Then, as dawn approaches, they see someone on the beach. This stranger gives them some advice: cast the net on the right side of the boat.

If I were the disciples, I don’t think I would have followed that advice. Why listen to a stranger on the shore? Also, I don’t know anything about fishing, but this advice makes no sense to me. Maybe the fishers in the congregation can enlighten me, but what does it matter which side of the boat you put your net down? The fish are either there in the lake, or they’re not! But, as it turns out, when the disciples cast again on the right side of the boat, they cannot not haul the net back into the boat, it is so full. They catch 153 fish.

This is when the story gets truly ridiculous. The beloved disciple recognizes the figure on the shore: it’s Jesus! Simon Peter promptly loses his mind. He puts on some clothes – not wanting to be immodest in front of his Lord and Savior – and jumps into the lake. Fully clothed, he swims to Jesus, not wanting to wait one second longer than he has to. The other disciples, who evidently have more common sense, make their way towards Jesus little more slowly, bringing the boat, and the gear, and all the fish that Simon Peter left behind. Then everybody eats freshly roasted fish and bread together on the shore.

What do you do after a resurrection?

The gospels and the book of Acts reveal that no one is quite sure what to do. In these scriptures, we see the disciples in many settings, and in many moods: afraid, bewildered, excited. The most surprising thing about these stories, however, is not what the disciples do, but what  Jesus does. Jesus is an unpredictable guy during his lifetime, but post-resurrection things get even stranger.

Let’s consider just the gospel of John. First, Jesus appears resembling a gardener and tells Mary Magdalene: Don’t touch me! Don’t hold me! As if, perhaps, a resurrected body could not or should not be touched. In the next story, Jesus appears among the disciples, moving through a locked door like a ghost. Then, he invites Thomas to touch the wounds in his hands and his side.

What happens next? He appears on the shore of a lake, gives fishing advice, and then acts as a sous chef for his best friends, feeding them breakfast (one of the inspirations for this April Fool’s joke).

What do you do after a resurrection? Maybe it’s as simple as this: expect surprises. The risen Jesus is with us in some mysterious way. He may appear at any time, and do anything. We just need to keep an eye out, so that, like the beloved disciple, we recognize him.

I wonder, as this Easter season begins, where has Jesus appeared recently in your life? How is God surprising you?  Maybe you were full of grief, like Mary Magdalene, and Jesus showed up with unexpected good news. Maybe you were full of fear, like the disciples in a locked room, and Jesus arrived to bless you with peace. Maybe you had an exhausted heart and an empty net, like the disciples who fished all night; and Jesus filled up your net and made you breakfast, to boot. Consider the surprising ways that God has popped up in your life in the past few weeks; or where you are longing for some surprise in this season.

Thank you God, for sending us Jesus: who lived among us, died and rose again, and lives now among us in new and surprising ways. Open our hearts to recognize him however he arrives, and receive the gifts he offers us.  Amen.