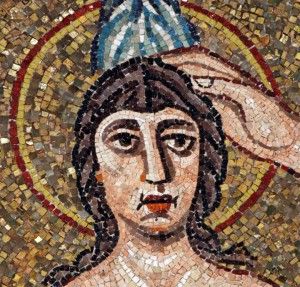 In the scriptures today, we discover the apostle Paul on one of his missionary journeys. He arrives in Ephesus and meets up with a group of about twelve followers of Jesus. Apparently Paul isn’t great at small talk, because the first thing out of his mouth isn’t some form of greeting or a remark about the weather, but a theological interrogation. Paul asks: “Did you receive the Holy Spirit when you became believers?” I don’t know about you, but this isn’t my favorite opening line when I meet a bunch of strangers.

It turns out, though, that Paul has asked an important question. Maybe he knew that baptismal practices were not what they should be in this area. Beliefs and practices of early Jesus-followers varied greatly. Whatever causes him to ask, however, Paul discovers that these folks were baptized by John the Baptist as a mark of their repentance and desire for renewal and return to God; but they have not been baptized in the name of Jesus. And it’s even worse than that – they did not receive the Holy Spirit at their baptism; in fact, they have never even heard about her.

Luckily for these sad, misguided Christians, Paul is there to help. He immediately sets about fixing the problem, baptizing them in the name of Jesus. As Paul lays his hands on them, the Holy Spirit comes upon them so powerfully that they speak ecstatic words of testimony and prophecy. Super Paul to the rescue.

This interlude from the book of Acts is amusing, and it helps us learn about baptismal practices in the earliest years of the church, but I wonder: what does it have to do with us? Most of us have already been baptized (and if not, let’s talk later). For those of us who have been baptized, I’m willing to bet that no matter what branch of Christian faith you were baptized into, what age you were at baptism, or how much water was used, that your baptism fulfilled Paul’s requirements. You have already been baptized in the name of Jesus, and received the Holy Spirit, even if it wasn’t quite as dramatic as the baptism we read about here. So what do we need with Super Paul?

Baptism is a Christian sacrament; and outward and visible sign of God’s grace. It’s one of only two sacraments in Protestant tradition,  and unlike communion, it happens only once for each Christian. Maybe it’s because it happens only once that many folks seem to have a strange relationship with this sacrament. It happens only once – so for some it’s just something to check off the list, something you do to make you or your baby official: get a nice outfit, find a nice pastor, say whatever they tell you to say. Or, on the other extreme, because it happens only once, folks get a little too concerned about getting it exactly right. They worry too much about which approach to baptism they should take, or whether they’re ready to take part. They want everything to be perfect, they want to be perfectly spiritually ready, or think they need to be perfectly orthodox in their belief.

Maybe it’s because it happens only once that baptism, this beautiful ritual of water and blessing, when we have the opportunity to repent and to receive the Holy Spirit, when we officially become part of the Jesus-following family, this lovely sacrament has become for many an unimportant feature of our faith; and for others, an obstacle to it.

It’s just a beginning, the threshold of a life in which we are invited each day to follow in the ways of Jesus; to give and receive blessings as part of communities of faith; and to open ourselves to the gifts of the Holy Spirit, our strange and beautiful companion.

Imagine Paul was here this morning. If he asked us, “Did you receive the Holy Spirit when you became believers?” we might be able to say yes; with a little discomfort at such a churchy question, and a wish that he had better social skills. But what if he asked this instead: How are you continuing to live in the power of the Spirit today?

It is January, the season of resolutions. Many among us have made resolutions, promises to ourselves about what we will do in the coming year to improve ourselves. Diet plans. Exercise trackers. An end to all sorts of bad habits, and a beginning of good ones. We’re trying to better ourselves with will power, and it’s mostly for the good. But at church, we’re asked an entirely different question, which is, what are you allowing God to do in your life these days?

Baptism isn’t an end; it is just the beginning. How are you continuing to live in the power of the Spirit today?