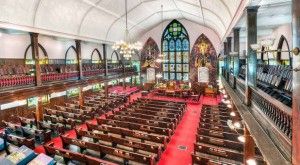 The scriptures this morning were chosen before we heard the news from Charleston; the news that nine black churchgoers were massacred by a young white man who had been warmly welcomed into bible study with them.

It is strange, now, to hear these words from the psalmist: “you bless the righteous, O Lord; you cover them with favor as with a shield.” It is strange, today, to hear the words of the Gospel, “even the wind and the sea obey him.”

Depending on how we hear and understand these words, we may feel betrayed. Because the faithful who were gathered on Wednesday night at Emanuel AME were not shielded from the violence of this young man, his ideology of white supremacy, or his gun. God did not still the storm of his rage. I can understand if you feel betrayed this morning. But I trust in these scriptures in a different way. I still believe that that God does protect and bless our souls, if not always our bodies. And I have seen and heard Jesus standing in the midst of this storm, rebuking the wind. I have heard Jesus saying “Peace! Be Still!” I have heard Jesus, in the voices of so many who have spoken out since this tragedy occured.

I confess, I learned a lot this week that I should have known before. I learned that the word “terrorism” has a much deeper history in America than its use to describe the acts of Muslim extremists. For most of American history, “terrorism” has referred to violence committed by white people against black people. The first federal anti-terrorism law was passed in response to the unchecked acts of violent hatred and intimidation carried out by the Ku Klux Klan. Thus, the NAACP calls what happened on Wednesday night an act of racial terrorism. I learned that this week.

This week I also learned about the history of Emanuel AME, known as Mother Emanuel, a church which holds special significance in the life of its city and our nation. This church is the oldest AME church in the Southern US, founded in 1816 by former members of the Methodist Episcopal church in Charleston. Experiencing increasing discrimination and segregation, more than four thousand African Americans in the congregation left to form a new church. But state and city ordinances demanded that the majority of congregants in any church be white, so raids were made on the church in 1818, 1820, and again in 1821. Church members were arrested simply for gathering; some were sentenced to fines and lashes. The church was burned to the ground by white supremacists soon after and the congregation had to meet in secret as black congregations were officially outlawed in 1834. When the church was finally rebuilt after the civil war, it had to be built on the North side of Calhoun street, as black people were not welcome on the south side. During the civil rights movement, Emanuel was the site of a speech by Rev. Dr. Martin Luther King Jr.; an organizing center for voter registration and turnout; and a gathering place for demonstrating strikers. It has continued to be a vibrant congregation that promotes equality and compassion. Throughout its history it has had pastors and leaders who are also elected representatives.

Make no mistake: we, America, are in the midst of a great windstorm. The waves are beating the boat; the boat is being swamped with water. This country’s racist roots have caused us, as a society, to bear strange and terrible fruit today. Prejudice is encoded in our laws; it is embedded in our systems; it lies deep in the unconscious of even the most well-educated and well-intentioned among us. None of us are free of it. We have been taught to hate; and so we allow our own citizens to slaughter one another, with little our no consequences.

Have you heard him?

Have you heard him through the organizers, and the writers, and the leaders? The prophets of our time?

Have you heard him in the words of the pastor and state senator, Rev. Clementa Pinckney, who just weeks ago spoke to fellow state senators in South Carolina, asking them to “rise to be the body and to be the state that we really say that we are,” acting on the “heartache and yearning for justice” caused by the death of Walter Scott?

Have you heard Jesus in the breathtaking responses of the families of those who died on Wednesday night? Did you listen to how they held the shooter accountable while offering forgiveness in the next breath? If anything will convince us of the presence and power of God, it is these people and their witness.

I look forward to talking with you more about what we can do together; this congregation; this community. I hope you will do one thing today. Write a card of support to Emanuel AME Church. Send a check to the Mother Emanuel Hope Fund, to help those who are burying the dead, and caring for the grieving. Read an article, to learn more about the storm that is ravaging our country.

For this moment, let us listen to the names of those who were killed. After their names have been read, our church bell will be rung nine times in their honor.

Holy God, We pray for Emanuel AME Church this morning: that God may provide the strength that they need; that their church and their church community might remain  a place of refuge, a place of leadership,a place of resurrection, a place of praise and joy. We pray for all who feel unsafe in their places of worship,and who fear for their lives and the lives of their children because of the color of their skin. We pray for all who are mourning victims of racial terrorism and hate crime. We pray for those who work to end racism and violence in our country, that their hearts might take courage for the long road ahead. Holy God, we pray for ourselves. We confess that we are a part of this problem and we ask for your help, that we might see and dismantle the hatred woven so deeply into our hearts, our communities, our country. We offer up all of our prayers to you now in silence… intervene for us, God, with sighs too deep for words. Amen.