What is to Prevent Me? 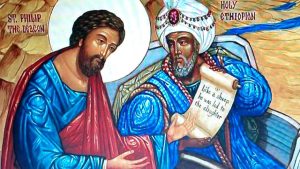 Today in our scriptures two people meet on a wilderness road, and the church is changed forever.

It all starts when an angel of the Lord comes to Philip. For those of you keeping track, this Philip is not the Philip who was one of the original 12 disciples. This Philip is known as Philip the deacon, because he was chosen to serve the poor in Jerusalem due to being full of the spirit, and full of wisdom. This Philip is also known as Philip the evangelist, because has been preaching in Samaria. His skill in sharing the good news of Jesus has been bringing many people into the church.

Now an angel of the Lord says to Philip, “Get up and go toward the south to the road that goes down from Jerusalem to Gaza.”  On this wilderness road Philip discovers another person traveling south: a eunuch who is a court official of Candace, Queen of Ethiopia.  Like so many people in the bible – many of them women – this court official is unnamed. At the suggestion of one of my mentors in ministry, I will call this person Dawit, an Ethiopian name that means “Beloved.” Not knowing Dawit’s preferred gender expression, I will use the pronouns they, them, and theirs.

It is hard to overstate how different Philip and Dawit are. These two are from different countries, on different continents. They grew up with different local languages and cultures. They were raised in different faith traditions. Dawit has a position of great power watching over the treasury of a Queen. By contrast, Philip has been spending most of his time making sure widows in Jerusalem get enough bread.  Dawit has also been castrated, set apart from an early age. Philip, as far as we know, is unusual in his own society only because of his decision to follow Jesus.

It’s hard for people who are so different to meet one another, let alone have an in-depth conversation. Here, the Spirit intervenes, urging Philip on: “Go up to this chariot and join it.” Philip runs up and hears Dawit reading the Prophet Isaiah. We as readers know that Dawit has been to Jerusalem in order to worship, so we can guess that they are interested in the Jewish faith.  Philip, on the other hand, was probably surprised to find this powerful foreigner with the text of Isaiah.

Philip asks, “Do you understand what you are reading?” This is, perhaps, an insulting question. It is certainly a bold one.  Dawit says graciously, “How can I, unless someone guides me?” Dawit invites Philip to get up beside them in their chariot. These two proceed along their way together, discussing the scriptures.  Philip shares what he understands about the good news of Jesus.

Dawit must be greatly moved by what they hear. When the two people come to some water, Dawit cries out, “What is to prevent me from being baptized?” Philip does not hesitate to do so. They both descend from the chariot, and Philip baptizes Dawit. Then, just like that, the encounter is over. Philip is whisked away by the Spirit, and Dawit goes away, rejoicing.

The Hebrew scriptures have a mixed witness when it comes to the social and religious standing of people like Dawit. And the early church was still discerning who could qualify to be baptized.  So there really was no clear-cut tradition for Philip to follow. He could have denied Dawit baptism on any number of grounds: failure to practice Jewish customs, lack of knowledge of the teachings of Jesus, skin color, region of origin, or, of course, castration.

When you come to think of it, Dawit’s openness to being baptized is as amazing as Philip’s immediate agreement. As far as we know, Dawit has only just heard about Jesus. Plus, Dawit has a lifetime of experience of being excluded. What makes Dawit brave enough to imagine they might be welcomed into this new movement of faith?

“Thus says the Lord: Maintain justice, and do what is right, for soon my salvation will come, and my deliverance be revealed…Do not let the foreigner joined to the Lord say, ‘The Lord will surely separate me from his people’; and do not let the eunuch say, ‘I am just a dry tree.’ For thus says the Lord: To the eunuchs who keep my sabbaths, who choose the things that please me and hold fast my covenant, I will give, in my house and within my walls, a monument and a name better than sons and daughters; I will give them an everlasting name that shall not be cut off.”  Isaiah 56:1, 3-5

Today we remember our Open and Affirming Covenant, made in 1999. Who here was in the congregation at that time? Who was part of the group who helped to bring it about?

1999, 19 years ago, was a very different time in our culture when it came to acceptance of differences in sexual orientation. It was a different time in our church, too. Affirming this covenant was difficult and contentious work. What continues to amaze me is that the covenant that this community created as part of a broader movement in the UCC was not only remarkable for that time, but sets a standard that we are hard-pressed to live up to today.

Consider this passage: “…we welcome persons of any age, gender, race, sexual orientation, socioeconomic status, ethnicity and physical and mental ability into full membership and participation in the body of Christ.  We celebrate family in all its diverse forms and honor, support, and bless all loving and committed relationships.”

This is revolutionary stuff! 1999. How did the leaders of this community manage to be so open to the movement of the Spirit, so full of wisdom?

Each of us knows what it is like to travel on a wilderness road. Life is full of surprising challenges, and the circumstances that surround us are always changing. Along the way, we encounter one another as strangers. Each encounter is an opportunity to risk liberation.

I’m not sure anyone would have the courage to take the risk of liberation and love without the encouragement of something outside themselves: maybe angels, or the urging of the Spirit. We also need the example of those who have gone before us in this work, and who join alongside us in it now. Thankfully, we have lots. Isaiah, and Jesus, and Philip, and Dawit, just to begin the list: folks who chose to be freed by love, and to offer that freedom to others.

So, beloved, let us give thanks for this way that has been opened for us and continue along it. The church universal, and this local church, still has so far to go, so much to live into and live up to. And each of us here could stand to learn more deeply that God loves us just as we are.  Nothing about who we are; nothing that we may have done, is enough to separate us from the love of God. Let us accept the liberation that love gives; and then offer it as best we can to one another. In the words of Paul: “Accept one another, just as Christ accepted you, in order to bring praise to God.” Romans 15:7